Please ensure Javascript is enabled for purposes of website accessibility
Log In Help Join The Motley Fool
Free Article Join Over 1 Million Premium Members And Get More In-Depth Stock Guidance and Research
By Adam Galas - Jan 8, 2015 at 8:45AM

A famous oil tycoon thinks oil is going back to $100 per barrel. Learn why, reasons he might be right, and five undervalued, high-yield dividend stocks to own if it does.

Investors in oil stocks such as Seadrill (SDRL), Hi-Crush Partners (HCRS.Q), Emerge Energy Services (NYSE: EMES), Breitburn Energy Partners (BBEPQ), and Linn Energy (LINEQ) have been brutalized over the last six months as oil prices have crashed to their lowest levels since the financial crisis. 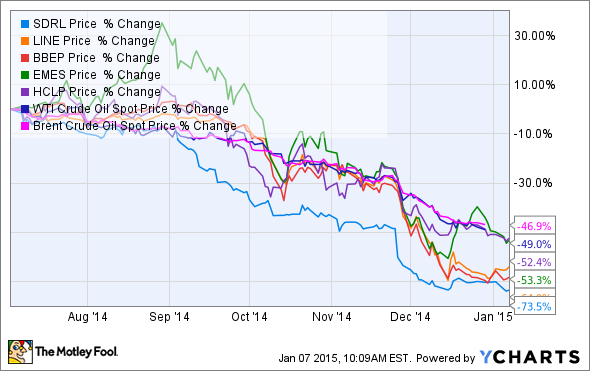 However, one oil billionaire is offering comforting words that promise not only a respite from these horrible losses, but a potential chance to cash in on enormous long-term profits and amazing high-yield income opportunities for any investor brave enough to buy at these severely depressed and undervalued levels.

The 50-year veteran of the oil industry stated that his prediction was largely based on OPEC being forced to cut production later this year, possibly at its June 5 meeting:

They didn't say they wouldn't cut, but OPEC will have to cut, and that is what's going to happen. The Saudis are the ones that make the cut. They can take $70 oil and take it out 10 years -- they have the cash reserves that allow them to do that. But they can't do that to the rest of OPEC.

Although I respect Mr. Pickens' experience and expertise immensely, investors should never make long-term decisions based on the words of a single expert. So, let's examine the likelihood that this bold prediction actually comes true.

On one hand, oil could soar
One of the primary causes of the current oil crash is the result of a 1.1 million barrels per day oversupply of oil on world markets.

According to the International Energy Agency, or IEA, this amounts to a 1.2% glut over this year's projected demand. Thus, for oil prices to return to their previous levels of $100 per barrel, supplies wouldn't need to tighten all that much. For example, a 3.7% production cut by OPEC might do the trick, as would small production declines from major non-OPEC members such as Russia, Mexico, Canada, or U.S. shale producers.

So, how likely is OPEC to cut its production by 3.7% in the next year or so? Well, as Mr. Pickens alluded to, all petro states' budgets are currently hemorrhaging red thanks to crude prices being far below the prices required to balance their budgets.

A production cut would certainly be appreciated by countries such as Ecuador, Nigeria, Iran, and Venezuela, who are running budget deficits at $50 per barrel of 4%, 12%, 13%, and 15% of GDP, respectively, and whose foreign currency reserves can't withstand 18 months of oil at current prices. 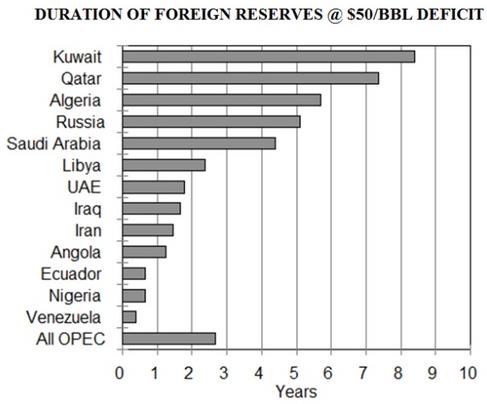 In fact, things have gotten so bad for some oil-exporting nations that they've had to turn to China for bailouts. For example, Beijing recently provided a $4 billion loan to cash-strapped Venezuela and executed a $24 billion currency swap with Moscow to stabilize the Russian ruble, whose 50% collapse over the past 12 months is devastating the Russian economy.

Meanwhile, U.S. shale producers are massively cutting back on spending, and new drilling permits in North Dakota and Texas declined in November by 40% and 50%, respectively, from their 2013 levels.

With many U.S. oil producers slashing their 2015 drilling budgets and oil drilling rig counts already starting to decline, potential U.S. oil production declines may indeed help alleviate the world oil glut over the next year and a half.

On the other hand, oil may stay cheap
Then again, predicting global oil prices is a tricky thing, and there are reasons to believe oil prices may remain low through all of 2015 or even longer.

For example, as this slide from Enterprise Products Partners illustrates, at an average annual price of $65 per barrel, U.S. oil production is still likely to increase in 2015 from oil projects coming online that have already been paid for. That locked-in production gain is even likely to continue at current oil prices of $50 per barrel since many small oil producers are over levered with debt and in desperate need of cash flow. Thus, they are unlikely to turn off the oil taps on wells that are already paid for and producing. 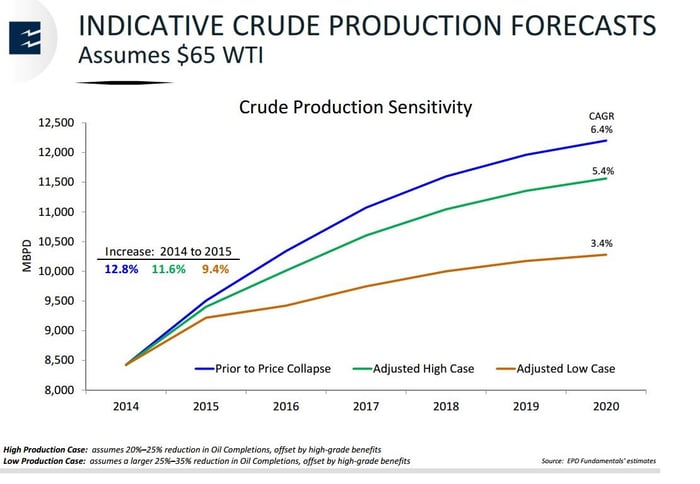 That increased supply, when combined with potential supply increases from new oil projects coming online in Russia and Iraq, could offset future potential production cuts from Saudi Arabia. In addition, the civil war in Libya has knocked nearly 1 million barrels per day of oil capacity from the world market, and if that situation resolves, then the return of that supply could help keep crude prices low far longer than most analysts believe is currently likely.

So, other than a continued world glut of oil and weaker-than-expected demand, what else could prove Mr. Pickens wrong? OPEC, for one. The current price war the cartel is waging with U.S. shale producers is for market share, and with U.S. production likely to increase for the first quarter or two in 2015, there is a chance Saudi Arabia pushes OPEC to not cut production. That's because a production cut would sacrifice market share, just as U.S. production is peaking and likely to decline.

Oil bulls would be wise to consider the words of Saudi Oil minister Ali al-Naimi, who recently told the Middle East Economic Survey that OPEC wouldn't be cutting production anytime soon no matter the price of oil, "whether it goes down to $20, $40, $50, $60, it is irrelevant." He also warned that oil may never again hit $100 per barrel.

While that may just be bravado on Mr. al-Naimi's part, designed to crash oil prices further and hurt Saudi Arabia's rivals, it may also prove true, in which case oil prices may not recover until late 2016 -- and to price levels far below the recent highs.

What it means for your portfolio

Right now, shares of Seadrill, Breitburn Energy Partners, and Linn Energy are trading at just 52%, 41%, and 76% of tangible book value, respectively, which is the liquidation value of all their assets minus liabilities.

In other words, these investments give you a chance to buy high-quality assets for as little as $0.41 on the dollar. This, along with their high yields -- which take into account recently announced distribution cuts from Linn Energy and Breitburn Energy Partners -- makes them, in my opinion, excellent long-term income investments with highly sustainable payouts, even in a world of much cheaper oil.

Meanwhile, Seadrill, having wisely suspended its dividend to focus on paying down its debt in the face of extremely challenging market conditions in the offshore drilling industry, will most likely restart its dividend -- though perhaps at a lower level -- when industry conditions improve. Given its current undervalued shares, I think it's possible that today's investors might be able to lock in a yield on current purchase price of 15% to 20% if the dividend is brought back at 38%-50% of its former level -- a dividend between $1.50-$2.00 -- within the next three to five years.

Bottom line: Oil prices will recover, but timing and magnitude are uncertain
Most likely, the price of oil will rise from its current low price, but how much and how fast is anyone's guess. My advice to long-term investors is to choose well-managed  companies and MLPs such as Seadrill, Breitburn, Linn Energy, Emerge Energy Services, and Hi-Crush Partners, and dollar-cost average while prices remain at supremely undervalued levels. That way, if Mr. Pickens is right, and oil eventually returns to $100 per barrel, or even settles at the $80 per barrel that Goldman Sachs is predicting, you'll stand to benefit, both from potentially strong capital gains and rising dividends and distributions.

Adam Galas has no position in any stocks mentioned. The Motley Fool recommends BreitBurn Energy Partners, Goldman Sachs, and Seadrill. The Motley Fool owns shares of Seadrill. Try any of our Foolish newsletter services free for 30 days. We Fools may not all hold the same opinions, but we all believe that considering a diverse range of insights makes us better investors. The Motley Fool has a disclosure policy.