Investors may have noticed by now that shares of renewable oils manufacturer Solazyme (NASDAQ: SZYM) tend to be heavily influenced by movements in oil prices. Even with the volatility in early October caused by some worrying press releases and the major one-day drop after the company announced a change to its growth plans in early November, the trend is pretty clear. Take a look for yourself. 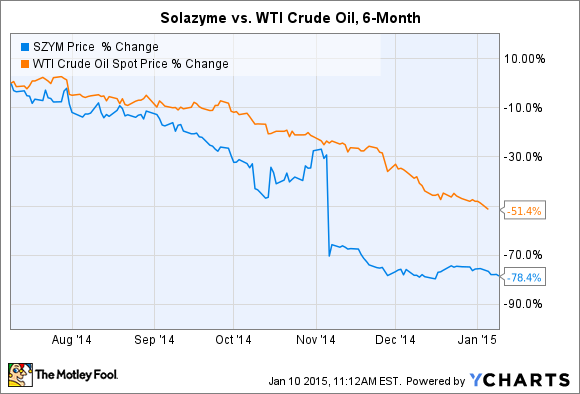 It's not difficult to see why investors, fund managers, or, heck, even trading bots so easily associate Solazyme ("the renewable oils company") with movements of crude oil prices. After all, the company's SEC filings list volatile petroleum prices as a risk factor.

But if you take a closer look into the company's new business direction you'll see the folly in that thinking. The company's three high-value products -- the focus heading into 2015 and 2016 -- have very little to do with petrochemicals.

Then and now
Compared to today, Solazyme had a very different commercialization strategy in place when it began ramping commercial operations in early 2014. The idea was to ramp commercial scale production facilities from low initial start-up volumes to full capacity over 18-month periods. Production would consist of two groups of chemical products: (1) commodity replacement chemicals such as surfactants and fuel additives and (2) high margin products such as food ingredients.

Commodity replacements don't boast very high selling prices, but because they have larger markets, they were expected to justify larger production volumes and result in higher utilization rates for large manufacturing facilities. Even if they were produced at a loss or breakeven, these products would demonstrate reliable operations to partners and potential customers, which would create value in the long-term. In short, commodity replacements were expected to provide a steady base of revenue for Solazyme.

Of course, commodity replacements are only as valuable as the products they're replacing. So, what are the top two commodities being replaced by Solazyme? Palm kernel oil and petroleum, which lost 28% and 16%, respectively, in the first nine months of commercial production for the company. Neither has done any favors for Solazyme since it went public in May 2011, either: 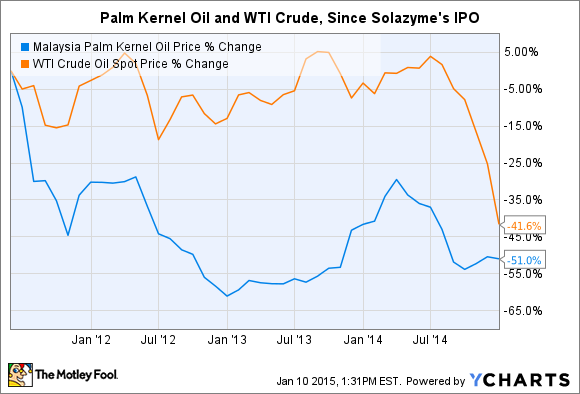 Falling commodity prices during the initial stages of production (the most expensive) weren't necessarily a nail in the coffin, but the company's production costs didn't fall as quickly as had been expected. Throw in slower than expected market adoption for its high margin portfolios and it was clear Solazyme needed to adjust its commercialization strategy to reduce losses -- so that's exactly what it did.

New product portfolios should distance Solazyme from crude oil
Solazyme is now focusing production on its high margin product portfolios. By definition, these products have smaller markets than commodity replacements and, therefore, will be produced in smaller volumes. Higher average selling prices are expected to enable profitable production and minimize losses from companywide operations until production costs are lowered to levels that justify manufacturing of lower margin products.

What's interesting is that the company's three high margin product portfolios -- Algenist cosmetics, Encapso drilling lubricants, and AlgaVia food ingredients -- have almost nothing to do with crude oil. While they each come with varying degrees of revenue potential in 2015, they should begin to distance Solazyme's share price from movements in crude oil prices.

What does it mean for investors?
It's important to remember that falling commodity prices and higher than expected production costs weren't the only thing that crushed Solazyme in early November. The company's largest manufacturing facility was delayed and won't be operating at full capacity until mid-2016 at the earliest. Management also announced greatly reduced expectations for revenue this year and left the door open to question the readiness of the technology.

In other words, don't think the the new focus on high margin products alone justifies an investment. It simply means the stock shouldn't be affected by movements in crude oil prices, although the correlation is likely to continue for the foreseeable future, at least until Solazyme can prove its new commercialization strategy. I'm still not so sure the company has overcome all of the technology hurdles facing its platform or that market demand for its high margin portfolios is strong enough to justify continuing operations, so I won't be buying shares anytime soon.

Solazyme Stock Trades with Oil Prices, But Here's Why It Shouldn't @themotleyfool #stocks Next Article
Current