Since its spin off from Abbott Laboratories in Jan. 2013, AbbVie (NYSE:ABBV) has been on the fast track growth-wise. The double-digit sales growth of its flagship anti-inflammatory drug Humira, and shareholder friendly management, have caused shares to blow away the broader market, shown by the chart below. 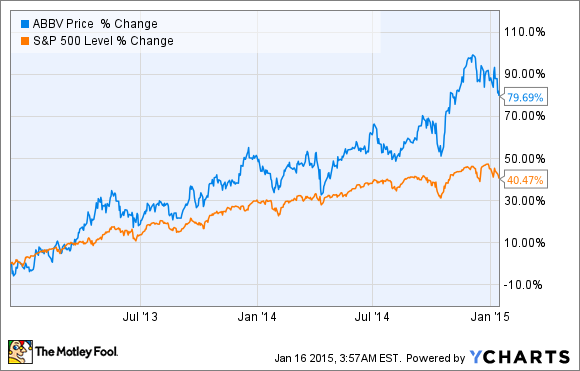 Despite this amazing return on investment, management has had to repeatedly reassure investors lately that this growth profile is indeed sustainable for the long-term. At the recent JP Morgan Healthcare Conference, for instance, AbbVie's CFO Bill Chase specifically discussed the company's prospects as a "sustainable growth business" by taking a rather deep dive into its clinical pipeline -- not exactly a normal course of action for a big pharma executive overseeing double-digit revenue growth.

What's keeping AbbVie's shareholders awake at night, of course, is the looming patent expiration for Humira. Humira presently accounts for a highly disproportionate 62% of total sales (via the first nine months of 2014), and more than half of the company's total profits. However, the drug is set to lose patent protection in the U.S. by December 2016.

Are investors right to worry about this event now in 2015?

Humira's patent expiration should be a nonevent
Humira's patent expiration would be a seriously detrimental event if it was accompanied by the typical loss of revenue that has befallen so many former blockbusters. But unlike most of its predecessors, Humira has a competitive moat against generics because it is a biologic, not a small-molecule drug like previous top-selling drugs Lipitor and Plavix.

What this means is that Humira probably won't face any significant generic competition in the form of so-called "biosimilars" until 2019 or perhaps later. The issue is that the legislation outlining the process for creating a biosimilar, and subsequently gaining an approval with the Food and Drug Administration, set an extremely high standard. As such, you shouldn't expect much, if any, revenue drop off from Humira when 2017 rolls around.

It took almost five years for the first biosimilar, Novartis' EP2006 -- a proposed biosimilar for Amgen's Neupogen -- to even receive a positive opinion from the agency, with many reviewers noting that they only did so because EP2006 has been on the European market for years at this point, making them feel comfortable with the drug's clinical profile.

No biosimilar for Humira currently exists in Europe because the drug's patent won't expire in most EU countries until 2018, making it impossible for a similar scenario to play out.

What's key to understand is that biosimilars can't by their nature be identical copies of an approved drug due to differences in source materials. The approval process is thus a judgement on a company's manufacturing processes, as much as anything, making it particularly costly to pursue a biosimilar. In short, you have to invest heavily in the drug's commercial production before a regulatory review can be undertaken, creating yet another barrier to the entry of generic biologics in general.

Why 2019?
Because Humira is the world's best-selling drug, multiple companies are lining up to develop biosimilars once the drug goes off of patent protection. And indeed, India's Cadila Healthcare has already launched a biosimilar for Humira dubbed "Exemptia" that it hopes can gain worldwide acceptance down the road.

That said, Cadila's own management has conceded that 2019 is probably the earliest the U.S. would grant an approval for a Humira biosimilar due to the initial legwork involved. And the better equipped European biosimilar manufacturers can't throw their hat in the ring until 2018, meaning that Humira should enjoy three to four years of exclusivity in the U.S. past its patent expiration.

Foolish takeaways
AbbVie's management hasn't spent much time talking or writing about Humira's patent expiration for these very reasons. Instead, they have tried to focus investor enthusiasm on the company's top-notch clinical pipeline that should be ready to handle falling Humira revenues by 2019. All told, this simply isn't an issue investors should be concerned about at present -- that is, unless something fundamentally and unforeseen changes with the approval process for biosimilars in the U.S. by the end of 2016. Stranger things have happened, but don't count on it -- I expect AbbVie to continue being a top growth stock for years to come.