Please ensure Javascript is enabled for purposes of website accessibility
Log In Help Join The Motley Fool
Free Article Join Over 1 Million Premium Members And Get More In-Depth Stock Guidance and Research
By Dan Caplinger - Jan 22, 2015 at 9:57AM

The airline suffered a slight drop in revenue and missed earnings expectations, but the coming year holds promise.

Airline stocks have soared to unprecedented heights in recent years, as a combination of decreased competition in the U.S. market, innovations in charging add-on fees, and rising demand for travel generally has pushed revenue and earnings at United Continental Holdings (UAL 1.73%) and its peers sharply upward. For much of 2014, United Continental shares played catch-up against rivals Delta Air Lines and American Airlines Group, but United has held its own since October. That served as the backdrop for the Thursday morning release of United Continental's fourth-quarter earnings; despite mixed news on the growth front, investors hope the airline can keep soaring as many factors remain favorable for the industry going forward. Let's look at United Continental and its 2014 results and see whether we can glean some hints about what 2015 will look like for the airline. 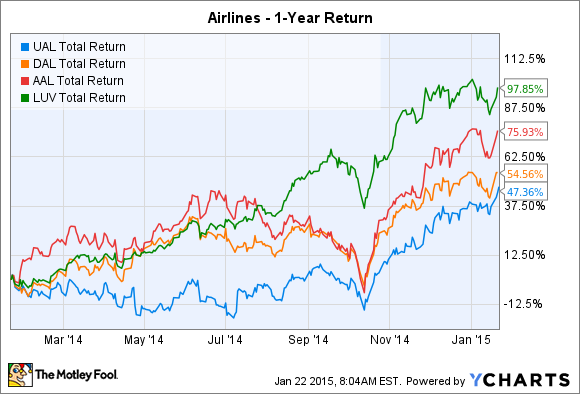 Did United Continental maintain altitude in the fourth quarter?

United Continental didn't give investors everything they had hoped for during the quarter. Revenue fell slightly from the year-ago level, to $9.31 billion, matching investors' expectations. But even after adjusting for losses on fuel-hedge positions and some severance and benefit costs, United Continental's earnings per share fell slightly short, at $1.20 versus the $1.22 that analysts had anticipated. Still, those adjusted earnings represented an 86% jump from the previous year, reflecting recent strong conditions in the airline industry.

Digging into the details provides some even rosier news for United Continental. Ancillary revenue climbed almost 10% year over year, with the airline pulling in more than $22 from each passenger it carried. Cargo revenue soared 18% as volumes of cargo shipped returned to more normal levels after an anomalous result in 2013.

The expense side of United Continental's income statement was especially attractive. Fuel costs plunged by $435 million from a year earlier, and even after considering offsetting losses from the airline's hedge positions, falling energy prices added considerably to United Continental's profitability. Excluding hedges, United Continental paid just $2.59 per gallon of fuel, down 17% from the $3.11 it paid in the fourth quarter of 2013.

Yet United Continental also faces some challenges. Passenger numbers fell, bringing revenue passenger miles growth to a standstill, and an increase in capacity caused load factors to drop from 82.4% in the previous year to 81.7% in 2014's fourth quarter. The airline's mainline service has been strong, providing gains in passenger revenue. However, regional service, which makes up about 20% of United Continental's overall passenger revenue, pulled down the company's consolidated results with a roughly 3.5% drop in revenue per available seat mile and overall revenue.

What's next for United Continental?

Despite those challenges, United Continental's management team is optimistic about the future. In a press release, CEO Jeff Smisek said, "I'm excited about what we will do this year to improve our operations, our product, and our customer service, focusing on growing our core earnings and margins." Chief Financial Officer John Rainey pointed to the company's efforts to keep expenses down, noting the airline's "solid cost performance in 2014 was driven by executing on our Project Quality efficiency initiatives." Even taking out the beneficial influence of lower fuel costs, United Continental expects to hold cost per available seat mile flat in 2015, which should result in wider margins and greater profits if fuel prices remain low.

Overall, though, investors don't seem as sure about the company's long-term efforts. United has been the third wheel to Delta's and American's dominance for a while, with its greater focus on international flights and its slightly different structural details both contributing to tighter margins. With the company still trying to develop synergies years after the United-Continental merger, competition against airline rivals in key hub cities including Chicago and Denver gives United Continental smaller market shares than Delta has in its crucial Atlanta market or American has in Dallas-Fort Worth. As a result, investors have traditionally given United Continental a valuation discount versus Delta and American.

For now, though, United Continental shareholders celebrated the news, sending shares up 3% to a new record high in pre-market trading in the first hour after the announcement. With so many positives lifting the airline industry, United Continental is poised to enjoy further success in 2015 as long as those favorable conditions last.