What: Shares of Campus Crest Communities (NYSE: CCG) rose as much as 13% on Tuesday after activist investor Clinton Group announced on Monday that it is partnering with Campus Evolution Villages, a private owner-operator of student housing assets, "in its pursuit to maximize value for all shareholders of Campus Crest."

So what: Clinton Group's announcement included an open letter to Campus Crest's board, in which it laid out the broad lines of a reorganization, which would have Campus Crest acquire Campus Evolution Village's management company. Clinton Group maintains that such a transaction would bring onboard the management talent that is required to turn Campus Crest around, as well as create a pipeline for future growth. Clinton Group currently intends to nominate four candidates for board representation at Campus Crest.

Campus Crest wasted no time in responding, announcing this morning that it is exploring "a broad range of strategic, operational and financial alternatives to further enhance shareholder value" and that it had elevated its chief investment officer, Aaron Halfacre, to the position of president.

Now what: It's little wonder that Campus Crest registered on an activist investor's radar. As the following chart demonstrates, from its inception as a publicly traded company in October 2010, the company has hugely underperformed its peers, whether small-cap stocks (Russell 2000 Index) or REITs (Dow Jones REIT Index): 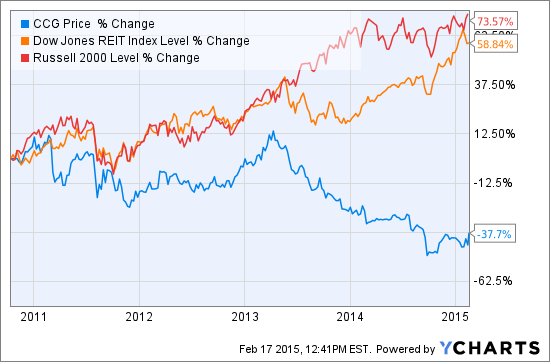 While we do not know which direction the board will ultimately go, we believe shareholders will win in either event and we are raising our rating to Buy and our price target to ~ NAV ($8.25) [from $7.50], compared to student housing and multifamily REITs trading at an average 102% & 98% of NAV, respectively, and which would represent a conservative 11.5x 2015E FFO vs. student housing peers trading at 18.3x and multifamily REITs trading at 17.9x.

However, with the shares now trading above $7.80, most of the road leading to the new price target has already been covered. Further gains will be harder (and will take longer) to achieve -- but they could conceivably overwhelm the height of this initial pop.