Higher domestic sales has helped light up McDonald's stock, which is up over 2% in the past month.

Everyone's focused on McDonald's (NYSE: MCD) Japanese same-store sales collapse in January, while largely ignoring the two consecutive months of rising comps in the U.S. That's the first time since October 2013 McDonald's was able to string together back-to-back sales growth here at home and follows after an unusually steep 4.6% drop in comps last November.

The November dip was the sharpest decline in comparable U.S. sales for the burger chain in over a decade, and caused management to spring into action to right the business. McDonald's announced the following actions:

The positive movement in U.S. comps makes it tempting to say management's plan is having an impact, but a closer look suggests recovery is not yet under way and both international and domestic markets remain damaged.

Japan's lost its appetite for McDonald's
Investors just need to write off the Asia-Pacific region for the time being. After the disastrous tainted meat scandal in China last summer, when a supplier to its Japanese franchisee was found using meat well past its expiration date, sales in Asia plummeted with Japan comps tumbling 12.6% last month. 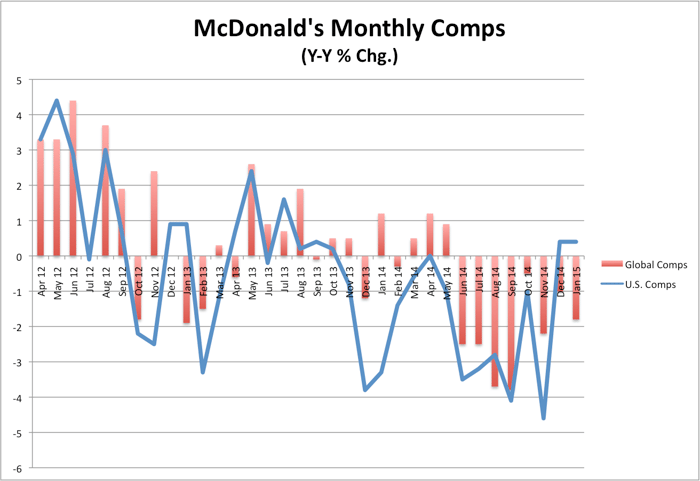 Regaining consumer trust takes time. Several years ago Yum! Brands (NYSE: YUM) suffered from a similar tainted meat scandal, and it took over a year for sales to turn positive again. Unfortunately, Yum! got caught up again in the same supplier scandal that hit McDonald's and comparable sales in its China division tumbled 16% in the fourth quarter.

So McDonald's still has a long road ahead of it in rebuilding its credibility with Asian consumers, which is why some might be tempted to think if it at least found the right recipe here at home it can hit the ground running when its Asia Pacific market recovers. Two straight months of higher sales is certainly a hopeful sign.

Why buy the cow...
Unfortunately, the increase in U.S. comps was uneven, led wholly by its breakfast daypart, its strongest segment. The researchers at Technomic estimate McDonald's has a 31% market share at breakfast, generating an estimated 20% of its $28 billion in annual worldwide revenue, but the gains were offset by the rest of the day because of "aggressive competitive activity." It's not only traditional rivals like Burger King and Wendy's hitting it hard at lunch and dinner, but also the "better burger" chains like The Habit and recently IPO'd Shake Shack.

Some also point to fast-casual chains such as Chipotle Mexican Grill as luring customers away, but the targeted demographic of Chipotle and McDonald's are not necessarily the same.

...when you can get the milk for free
Worse for McDonald's, I'm not even sure the breakfast business is doing as good as the numbers might suggest. They may be influenced by the continued promotion the burger chain runs giving its coffee away for free.

Last April, in an attempt to blunt the effect of competitors like Taco Bell and White Castle offering breakfast menus, McDonald's began giving away its coffee in a limited-time promotion. And it worked! A string of six straight months of falling comps was met with a single instance of flat sales. Once the promo ended, however, sales started falling once more.

McDonald's trotted out the free coffee again in September, and now for 2015, has committed to giving away free coffee every Monday for the whole year, though it's up to each region and franchisee whether they'll participate, and for how long. Clearly giving away your best product is not sustainable.

Hard choices still on the menu
The burger joint has numerous problems confronting it, and must confront them amid a change in leadership after its CEO abruptly announced he would be stepping down on March 1. Changing horses midstream is always a challenge, but doing so as a company also struggles to negotiate a U-turn makes it doubly so.

McDonald's has thrown a lot of ideas at the wall, hoping some of them stick. It may just be wishful thinking, though, to look at the two straight months of comparable U.S. sales growth as indicators that those plans are having their desired effect.

Don't Blink, This May Be As Good As It Gets for McDonald's Inc.'s @themotleyfool #stocks $MCD $YUM $WEN $CMG $BKW.DL $HABT $SHAK Next Article
Current