LINN Energy (OTC:LINEQ) has been a darling of the energy industry in recent years. That popularity stems from the fact that it has offered investors large quantities of tax-advantaged income that was derived from oil and gas wells.

However, when the price of oil came crashing down, so did LINN Energy's distribution, as it turned out the company's oil and gas hedges just weren't enough to protect it when the price of oil was cut in half. For some investors, this has been a reminder of the big difference between LINN and other energy MLPs, which are much less tied to commodity prices, and therefore offer more stability in distribution.

With income stability being important to investors, we asked our energy analysts for their top MLP for income security, as these could be smarter buys for investors who need quality income over quantity.

Tyler Crowe: Part of me feels weird speaking ill of a company that I own and I think has the right ideas in place, but if we are looking for a company that has a safe, reliable, and growing dividend to build wealth over the long term -- which is the goal of all investments, right? -- then I have to go with my gut and say Magellan Midstream Partners (NYSE:MMP) is a smarter investment than LINN.

Aside from the obvious differences that one is a midstream pipeline company and the other is a producer, it's the subtleties in these business models that make Magellan a real stand-out company for me: 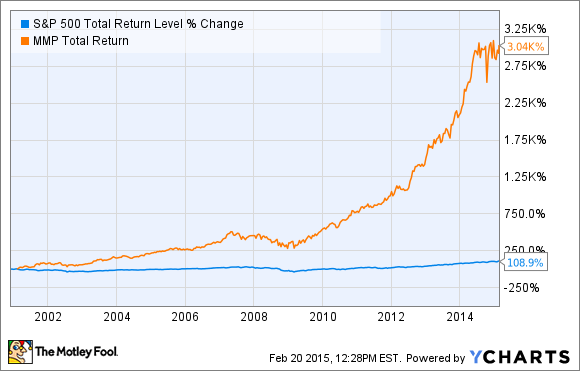 I'm not saying you should sell LINN, by any means. I'm hanging onto my shares. But if I had to choose between buying more shares of one of these companies, I would pick Magellan every day and twice on Sunday.

Jason Hall: Although I agree with Tyler on LINN -- the company will continue to face real challenges in the current oil price environment -- midstream MLPs can be largely insulated from this. My pick today is ONEOK Partners (NYSE:OKS), managed by ONEOKE (NYSE:OKE).

ONEOK Partners derives about two-thirds of its income from fees, primarily from its storage, gathering, and pipeline assets, versus selling oil or gas. Contracts for these services are typically long term with minimum volumes, meaning ONEOK Partners should have relatively predictable revenue and earnings for years to come.

LINN, on the other hand, is in the business of finding and producing oil and gas, putting it largely at the control of the commodity market. And while the company can use hedges to protect the downside of an extended cheap oil environment, it won't have anything like the stability of a midstream operator like ONEOK Partners.

If you invest in MLPs for the income they produce -- which you probably do -- then predictable and dependable income should matter more than upside potential: 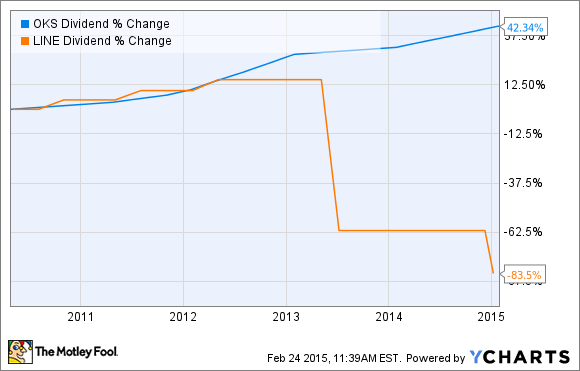 Yes: LINN Energy probably has a great shot at being a big rebound stock this year -- especially if oil prices recover quickly, but if it's income you can depend on that you're after, ONEOK Partners is a hands-down better bet than LINN.

Matt DiLallo: Like Tyler and Jason, I want to make it clear that I speak no ill will toward LINN Energy. I've owned it pretty much since it went public and have steadily added to my position on dips. However, because I'm several decades away from retirement, I'm in a bit of a different boat than a lot of other LINN Energy investors. I know that not everyone has the stomach for the volatility we've seen over the past few months, as many investors prefer stability above all else. For them, a much smarter choice would be Enterprise Products Partners (NYSE:EPD).

There are several differences between the two companies, each of which tilts the scale toward Enterprise.

First and foremost is the fact that Enterprise is focused on owning midstream assets like pipelines and processing plants, while LINN Energy owns the actual oil and gas wells. Those wells mean LINN Energy is fully exposed to oil and gas prices. Meanwhile, Enterprise has little actual exposure to energy prices, as its business is focused on leasing out capacity of its assets to producers. Because of this its revenue is contractually secured no matter what happens to energy prices.

In addition to a big difference in business models, Enterprise is much more conservative financially. It has the highest credit rating among MLPs, while LINN's balance sheet is much weaker. One of the reasons Enterprise is strong is because it typically retains a third of its distributable cash flow and uses it to fund growth projects instead of using debt.

LINN, on the other hand, typically distributes all of its income to investors leaving it with little breathing room. By being more conservative, Enterprise has been able to raise its distribution 41 straight quarters while LINN hasn't boosted its payout in years and recently cut it in half. Suffice it to say, the company could learn a thing or two from Enterprise.

The bottom line, here, is that Enterprise Products Partners is the smarter play for investors who are looking for a steadier MLP for their portfolio. Its yield might be a lot less than LINN's, but that payout is only going to increase in time, while LINN's could always be cut again in the future if the price of oil doesn't improve.