Picking great stocks that you can own year in and year out, regardless of the market's machinations, could go a long way toward helping investors stay on the path to financial security. However, it can be difficult to know which companies are truly great. To that end, our Motley Fool experts have identified five top-tier companies that they think have what it takes to deserve a spot in investor's set-it-and-forget-it investment portfolios.

Eric Volkman: You can hardly go wrong with an investment in 3M (NYSE:MMM), the sprawling industrial conglomerate that makes everything from Post-it Notes to water filtration systems.

It's one of the great and enduring success stories in American business, and it shares this prosperity by handing out a substantial dividend. This is not a new development; 3M’s a dividend aristocrat, one of the rare stocks that has raised its distribution at least once for a minimum of 25 consecutive years. In fact, it has blown way past this requirement by doing so for 56 years in a row.

In terms of fundamentals, 3M has managed to sustain above-average performance for decades. It’s very profitable, lately returning annual net margins in the 15% neighborhood -- a tricky feat to pull off for a company of its big size.

In fact, all five of its main business units have posted revenue gains across the last six quarters. Some investors are concerned with the effect the strengthened dollar will have on the company’s results going forward (around 63% of its sales came from abroad), but this was a factor at the end of 2014 and 3M still managed to grow its annual top line on a year-over-year basis.

And despite those recent concerns, 3M’s stock price has more than doubled over the past five years.

Better, the shares are still a bargain. Just now they boast an above-average dividend yield (2.4%, versus the current S&P 500 average of 1.9%). Meanwhile, trailing twelve-month P/E is 22 for a business that should endure for a long time and keep making money.

Close your eyes and buy this one; 3M will take care of the rest for you.

Dan Caplinger: For me, Disney (NYSE:DIS) is the ultimate set-it-and-forget-it stock. The need for entertainment has existed for millennia and isn't going to end anytime soon, and Disney has demonstrated its ability to keep up with the times and provide the entertainment experiences that keep its loyal customers coming back for more. Disney's portfolio of properties is extremely diverse, with the live entertainment of its theme parks, the television programs from its ESPN and ABC networks, and its well-known movie studio that incorporates franchise releases from Lucasfilm, Pixar, and Marvel as well as its own trademark animated classics.

Disney's prowess at cross-marketing its entertainment offerings is without parallel, as the company's own retail outlets take full advantage of the promotional value of its extensive set of characters and storylines. Every time the company comes out with a new hit film, the opportunities for spinoff television programming, new theme-park rides, and lines of toys and related products all mean more money in Disney's pocket. At the same time, Disney recognizes how much its content is worth, dangling it in front of content distributors and reaping full value through smart strategies like limited releases. Disney's offerings will look different decades from now than they do today, but the company should be just as successful by following its well-proven business model.

Todd Campbell: Few trends are likely to be as profit-friendly as an increasingly insured and aging America, and the one company I think is positioned best to capture that opportunity is UnitedHealth Group (NYSE:UNH).

UnitedHealth Group is already the nation's largest health insurer, but it's getting even bigger this year. That's because the company has gone from offering health insurance plans through the Affordable Care Act exchanges in just four states during the first open enrollment period to offering them in 23 states this second time around. The Department of Health and Human Services reports that 11.4 million people have signed up for insurance through the federal and state exchanges this year, so UnitedHealth Group's membership -- and its premium revenue -- should jump in 2015.

The ACA exchanges offer UnitedHealth Group revenue tailwinds for years to come, but it's not the only reason to like the company. Over 10,000 baby boomers turn 65 every day, and as they do, more of them are choosing Medicare Advantage plans that are offered by UnitedHealth Group. Additionally, UnitedHealth Group's Medicaid business is growing thanks to rising awareness tied to Medicaid expansion, which has been adopted in 29 states (including D.C.).

Overall, UnitedHealth Group is likely to remain a cash flow machine, and that should help it continue to reward investors with buybacks and increasingly larger dividend payouts. In my view, that makes it the perfect set-it-and-forget-it stock to own.

John Finnegan took the helm as CEO in 2002, and since then, he's produced average returns on equity of more than 15%. He slashed insurance lines that proved to be unprofitable, including reinsurance, to focus only in areas where Chubb can generate an underwriting profit. Most insurers break even on their underwriting, hoping to make money from investing premiums not yet paid out in claims. Chubb effectively says "why not both?"

In making conservative projections about the future, Chubb often draws the ire of Wall Street, only to smash through its own guidance at the next earnings report. In any risk business -- and insurance is all about risk -- not caring about Wall Street's short-term view is an enviable trait. You want management teams that are comfortable with a slow-and-steady approach -- companies that don't make aggressive forecasts only to take inordinate risks to reach a bar they set too high.

Chubb isn't the kind of company that will double in value from one year to the next, but it is a slow and steady compounding machine that will prove its mettle over decades.

Jason Hall: After the downright scary events that really started to materialize back in late 2007, many investors have put the megabanks in the "forget it" part of this conversation. However, there are few companies in any industry that are more rock-solid than Wells Fargo (NYSE:WFC). Even during the heart of the financial crisis, Wells remained on solid footing, and profitable, while its megabank peers such as Citigroup and Bank of America saw their profits tumble in the wake of the subprime mortgage collapse.

The biggest driver? A great leadership team that has kept Wells Fargo focused on traditional banking and lending business, while its peers built up (or acquired) major investment banking units. While Wells didn't come out of the mortgage crisis completely unscathed, it didn't suffer the double-whammy that banks with major investment banking operations did, and many are still dealing with: 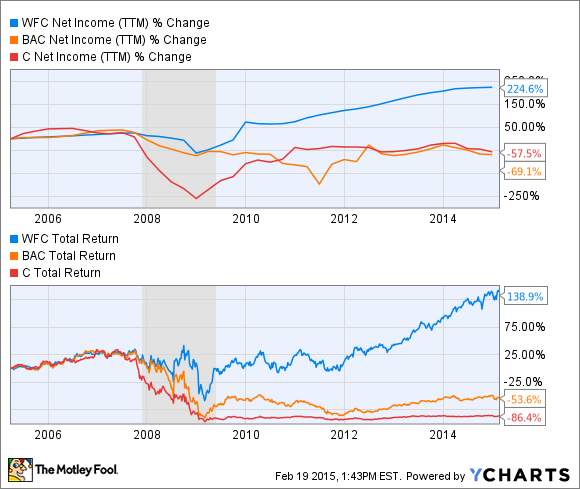 The result? Wells Fargo's profits have never been higher, and long-term shareholders have been well rewarded.

Need more evidence that Wells Fargo is a top-tier investment? Berkshire Hathaway holds 463 million shares, valued at $25.3 billion, making it by far the company's biggest single holding. If Warren Buffett is willing to let Wells Fargo account for more than 20% of Berkshire's stock portfolio, it's probably one heck of a solid company.