People say that it's the third time that's the charm. Italian armsmaker Beretta ("Fabbrica d'Armi Pietro Beretta" to its amici) had better hope they're right.

Twice now, Beretta has offered to build a new handgun for the U.S. Army's Modular Handgun System competition -- a $400 million project to replace between 280,000 and 500,000 military sidearms with a new gun that offers: 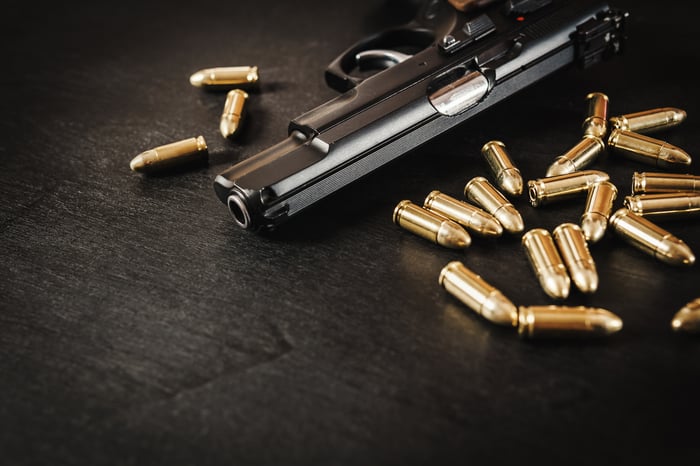 Responding to the military's concerns, Beretta first offered to make changes to the basic Beretta M9 design to "address" any "perceived or real" issues with the gun, short-circuiting the MHS process, and keeping competitors out of the picture. That offer apparently didn't fly. Next, Beretta suggested that the Army upgrade its existing armory of Beretta M9 handguns with a new and improved design Beretta calls the M9A3. The Army rejected that idea, too.

So, what's left to try? Build a better handgun: the Beretta APX.

Beretta drew the curtain on its first-ever "striker-fired" pistol over the weekend at the International Defense Exhibition and Conference in Abu Dhabi (IDEX 2015). The military hardware experts at IHS Jane's Defense were there to see it. Here's what they have to report:

The APX also features a fully serrated slide that makes the gun easier to grip and cock. (And a novel "emergency unconventional cocking" mechanism as well -- by pulling on the gun's rear sights.) Probably the biggest difference between the APX and Beretta's M9 models, though -- the real "knock your socks off" feature of the APX -- is that Beretta has broken with nearly 500 years of tradition and introduced its first gun not fired with a hammer.

Instead, APX is built with an internal striker to ignite the primer and fire a bullet, rather than the more common external hammer. As such, Beretta's APX appears to be taking a cue from the popular Glock line of handguns -- but it's also guaranteed to spark a debate among gun owners.

On the plus side, "hammerless" pistols have been gaining popularity lately. Their proponents note that with no need to cock the hammer, a striker-fired pistol is easier to fire -- and ready for action faster, and capable of a faster rate of fire. (No hammer also means no hammer to snag when you're drawing your weapon.)

Critics of striker-fired pistols, on the other hand, point out that once a round is in the chamber, a striker-fired pistol is always ready to fire -- and more vulnerable to incidents of accidental discharge. Indeed, this was a common criticism with Glock when its gun was first introduced to police departments in the U.S. It took officers awhile to get used to the new design.

Methinks me sees a clue!
And that right there is probably our biggest clue to the future Beretta sees for the APX. Fears of a gun going off before it's supposed to are more likely to worry civilian law enforcement (and civilians, period). In contrast, the military is more likely to concern itself with making sure its weapons are ready to fire when needed. And a hammerless, striker-fired design may be better for that purpose.

The fact that Beretta introduced APX at IDEX, too, suggests it's targeting primarily a military market for the new gun. Not necessarily the U.S. market, mind you. In fact, I'd argue that by not offering APX in a .45 caliber, and choosing a polymer frame despite the U.S. Army's clear preference for metal-framed handguns, Beretta may be handicapping itself on a potential MHS bid. On the other hand, Beretta may have positioned itself to capture more market share from Smith & Wesson and Ruger in the civilian market, for any buyers who've been itching to own a Beretta -- but only one that was striker-fired. That's now an option for them.

That said, within the context of the Army's search for a new handgun, I have to say that while the APX is certainly a novel product (for Beretta, at least), and potentially superior to the redesigned Beretta M9, it doesn't change the dynamics of the MHS competition as it's shaping up. For my money, the leaders there remain Smith & Wesson, and its bid-partner General Dynamics (NYSE:GD).