Please ensure Javascript is enabled for purposes of website accessibility
Log In Help Join The Motley Fool
Free Article Join Over 1 Million Premium Members And Get More In-Depth Stock Guidance and Research
By Demitri Kalogeropoulos - Mar 4, 2015 at 8:41AM

Yes, it's expensive right now. But that's not keeping me away from this world-class retailing business.

Home Depot's (HD 1.38%) stock hit a new high last week after the retailer: 1) posted blowout fourth-quarter results, 2) hiked its dividend, and 3) announced plans to spend $18 billion repurchasing its stock over the next three years. The news powered a great week for shareholders, but it's been an even better decade. The stock has returned 190% while the market is up 75% in that time. 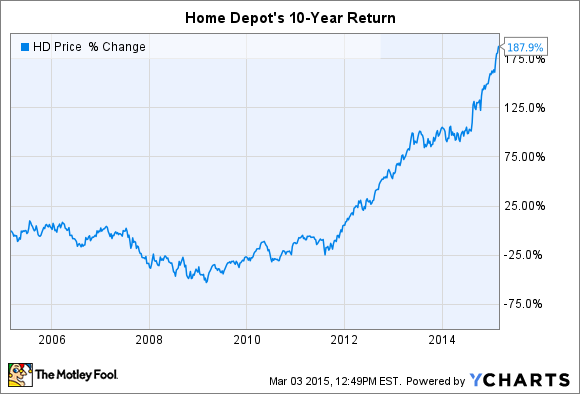 I have been a vocal fan of Home Depot's stock for years, and I have kept a bullish call on it in Motley Fool CAPS since 2013. More recently, I argued it could be one of the Dow Jones' best performers this year and that shares looked cheap after data breach worries pushed them to $90 last September. The stock has grown more expensive since then, but my view hasn't changed. I believe Home Depot is a great long-term investment, which is why I'm buying shares.

Wonderful business
The retailing giant just closed out a record year in which it added $4 billion of revenue to reach $83 billion in sales. Comparable-store sales jumped higher by 6% through 2014, with the highest comp rate, 9%, coming in the fourth quarter.

Home Depot's world-class financial efficiency allowed it to turn that $4 billion of extra sales into an additional $1 billion of net profit. That marked an 18% gain over 2013, and aggressive stock buybacks ($7 billion spent in 2014) helped earnings per share improve at an even quicker 25% annual pace.

Meanwhile, operating margin rose by a full percentage point to 12.6% of sales. It is now close to a lock that Home Depot's management will this year hit both of the long-term financial goals it set in 2013 of achieving 13% operating margin and a 27% return on invested capital. 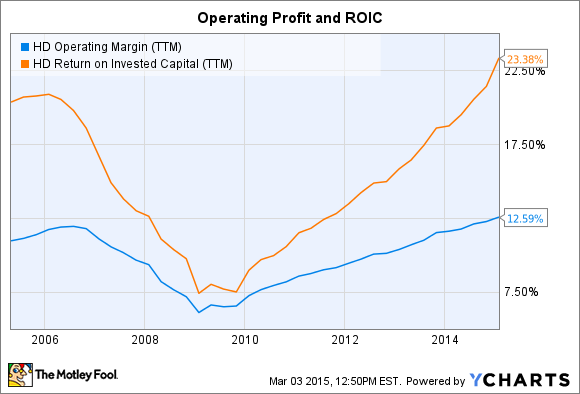 It's true that all of these business improvements have pushed up Home Depot's valuation. The stock is now going for 22 times the $5.25 per share Wall Street expects it to earn this year. On a trailing basis, Home Depot's price-to-earnings ratio is 25, near its highest value in a decade. Yes, that makes it less likely we'll see huge stock price appreciation from here. But if you're focused just on the share price, then you're missing the bigger Home Depot investment story that includes massive cash returns to shareholders.

The bigger picture
Management is cautious about its spending, targeting just six new store openings this year while shelling out less than $2 billion on capital investments. Meanwhile, existing locations will have some bumpy years ahead, but they are very likely to be churning out higher sales and profits a decade from now. Business is strongly correlated to the strength of the U.S. economy and the housing market, which traditionally rise over time.

Bigger profits and restrained spending should combine to power billions in excess cash production that will be delivered into shareholders' pockets. And you don't have to just take management's word for it: Home Depot has a good track record of returning cash through both channels lately. It has spent $53 billion on share buybacks since 2002, representing over 1 billion shares.

Home Depot also raised its dividend by 26% this year, following last year's 21% boost and 2013's 34% hike. Management has a stated target of returning half of all earnings to shareholders through dividends, and it has hiked the payout at roughly the same pace as profit growth each year.

Adding dividends to the picture shows an even better investment performance over the last 10 years. Updating the above chart to include those payments gets us up to a 270% return. 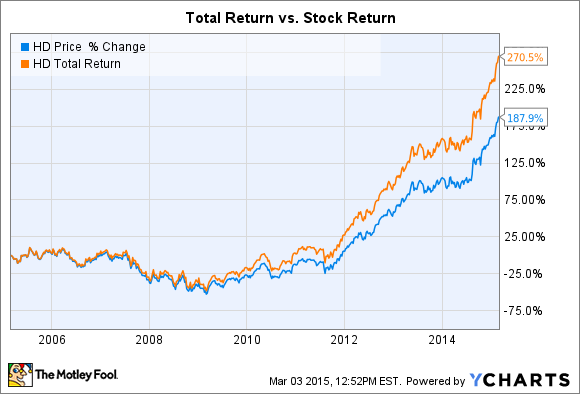 I don't expect Home Depot to keep posting 6% comparable-store sales growth and 25% higher profit every year. But I do think it's likely to lead the home-improvement retailing industry for the next decade. Through that time management should continuing rewarding shareholders with cash returns on any excess earnings Home Depot generates.