Why cooking at home is getting more expensive.

Have you noticed your grocery bill inching higher lately? If so, you're not alone. A recent Gallup poll asked Americans to list areas in which they are spending more money. Their dominant answer wasn't cable or Internet bills -- or even rent or retirement savings. Instead, more people cited groceries than any other budget category as consuming additional cash these days.

Supermarket spending beat out health care, housing costs, phone services, and utilities as the No. 1 category where spending was rising as of summer 2014. Meanwhile, dining at restaurants fell to dead last in Gallup's list, with almost 40% of Americans spending less on food away from home. 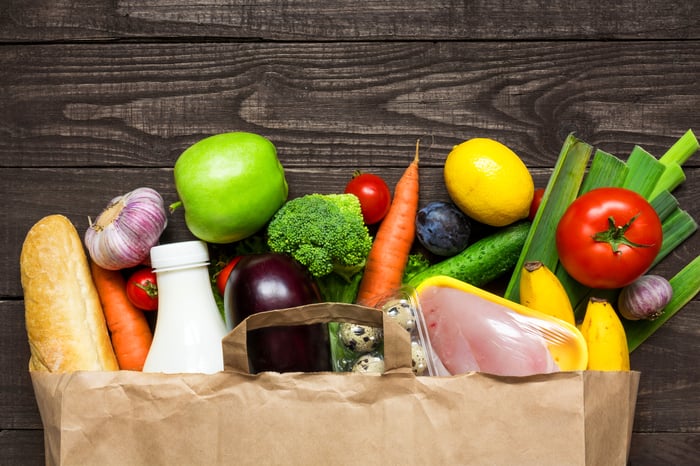 Why we're spending more on groceries
The survey results correspond with government statistics showing how much more we're devoting to groceries relative to our other budget priorities. That's partly thanks to cost-cutting: Consumers are scaling back on travel and other pricey categories while devoting extra to making meals at home. But there's a simpler component to this spending bounce as well: rising prices at grocery stores.

Supermarket prices jumped by 3% last year, with much higher spikes for many staples such as dairy and beef. As a result, even if your purchasing habits haven't changed, your grocery bill is likely rising. Most grocers expect a similar cost increases for the year ahead.

This commodity bounce has created a tough environment for supermarkets as they work to keep customers happy while passing on higher prices. A recent consumer survey found grocers such as Whole Foods and Kroger are succeeding at finding this balance and satisfying shoppers, while Wal-Mart isn't.

Typical grocery spending
According to the U.S. Bureau of Labor Statistics, the average American family spent $4,000 per year on groceries in 2013, or about $330 each month. That's up 2% from the prior year, and makes food the fourth biggest budget priority behind housing (rent or mortgage), transportation (car payments, gas), and personal insurance and pensions (including Social Security taxes). 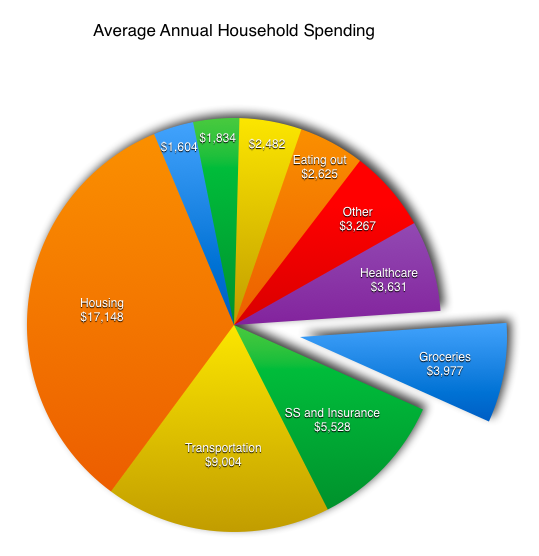 In the context of a yearly budget, groceries count for about 8% of typical family spending, above health care (7%), entertainment (5%), and clothing (3%). Meanwhile, annual grocery spending is up by $140 since 2011. Pre-tax income rose by just $99 over the same time frame. Those two numbers tell you all you need to know about why many grocery budgets are still under such pressure.

Of course, there is plenty of variability beneath these broad averages. The lowest-income families, those who make less than $10,000 per year, spend about $200 per month on groceries. That accounts for a disproportionate 11% of their budget. At the highest income levels, those with an average salary above $150,000, the figures flip. Wealthy families spend roughly $500 per month on groceries, or 6% of their total spending.

Wide range of companies
There are successful public companies that focus on serving each of these grocery-shopping demographics. At the high end of the income scale is Costco, the warehouse giant that is leading all national retailers in sales growth.

Whole Foods and Kroger are also attracting more shoppers, particularly by investing in customer service and cutting prices. Meanwhile, Dollar Tree focuses on products selling at $1 or less, and the discount retailer just posted its highest customer traffic year yet. As CEO Bob Sasser explained in a conference call with investors last week, "Dollar Tree is part of the solution for millions of consumers as they strive to balance their household budgets."

The best grocery retailers are helping with that tricky balancing act facing many Americans as they aim to stretch their grocery budgets while costs march higher.