Just three years after the current car's debut, GM is gearing up to take on the Camry and Fusion with a Malibu that is all-new from scratch. Will it work?

General Motors released this "teaser" photo of the all-new 2016 Chevy Malibu this past week. The new Malibu will be officially unveiled at the New York auto show in April, GM said in a statement. Source: General Motors.

General Motors (GM 0.41%) might not be quite as dominant in the U.S. auto market as it once was, but it's still the leader. That's not likely to change anytime soon.

And for all of the (well-deserved) knocks on Old GM's low quality, post-bankruptcy GM has made huge strides. By some important measures, GM's quality now rivals Toyota's (TM -0.56%).

Now, GM is stepping up with an all-new Chevy Malibu for 2016. The automaker will show us the car at the New York International Auto Show early next month.

Will this be the Malibu that finally puts Chevy back in the family sedan race?

An all-new Malibu from scratch, just three model years after the current car's debut
We don't know a lot about the new Malibu yet. But we do know this: GM appears to have started over from scratch.

General Motors said in a statement that its engineers started with a "blank slate," an all-new vehicle architecture. That architecture is called "E2XX" in GM-speak, and it will replace the (mostly well-regarded) Epsilon 2 architecture that underpins the current Malibu and many other GM models around the world.

The current Malibu was new for the 2013 model year. It's a good car, but the top competitors in the segment are better than "good," and that has cost GM sales and profits. Source: General Motors.

That new architecture will make the new car 300 pounds lighter than the existing model, thanks to a higher-strength steel structure, GM said. It also provides the new Malibu with a wheelbase that is almost 4 inches longer than the current model's. That means more legroom in the backseat -- a nice feature in the U.S., but a critical consideration in the Chinese market, where family elders often ride in back.

Ed Welburn, GM design chief, noted in a statement that the new Malibu's roofline has been stretched to make the car look sleeker, while the front wheels have been moved forward to improve its overall proportions. The new Malibu also has a "sculpted body side," he said, a distinctive feature of the bigger Chevy Impala sedan.

The new Malibu could incorporate some of the bigger Impala's distinctive styling features. Source: General Motors.

Speaking of the Impala, GM would love to see its new Malibu approximate the critical success of its big sedan, which scored highly in reviews when it was first released. But sales of big sedans are tiny compared to the potential of midsize cars like the Malibu -- a potential the current Malibu hasn't quite reached.

An aggressive move by GM to fix a critical weak spot in its lineup
The company has released a slew of strong products over the last few years, but the current Chevy Malibu hasn't quite measured up to GM's best. To GM's immense credit, it recognized this weakness early. The latest Malibu was introduced for the 2013 model year, but weak reviews led GM to release a significant refresh in 2014. That didn't help much, and now GM is bringing a replacement to market early.

The current Malibu isn't a bad product, and it did improve a bit in the 2014 refresh. But it still hasn't stood out. In a category led by the long-dominant Toyota Camry and Honda Accord, the value-priced Nissan Altima, and the sharply styled Ford Fusion, not standing out means sales suffer. And they have, as this illustration of 2014 sales shows. 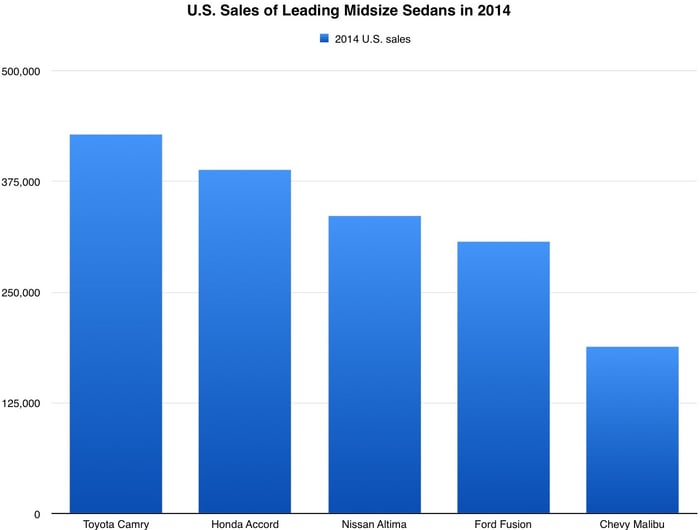 The current Malibu's sales have lagged well behind those of the segment's "big four." Source: Automaker sales reports.

Worse, profits will suffer, because also-ran products often rely on discounts to keep sales flowing through their life cycles.

Ford's latest Fusion shows the way: Sharp styling, a long list of premium features, and a quiet, solid ride that impresses test-drivers helped make the Fusion a big hit that commands premium prices. Sales have slowed a bit as the car has aged, but for a while, demand was so strong that Ford had trouble keeping up.

That's a problem GM would love to have with its all-new Malibu.

A great new Malibu could boost GM's profits in the U.S. and China
General Motors CEO Mary Barra has made it clear the company will push aggressively to boost its profit margins, in the U.S. and around the world.

Great products have already helped GM increase its margin in North America to a level competitive with well-managed rivals such as Ford. But the current Malibu hasn't made as big a contribution to that effort as Barra and her team would like, and it could be doing much better in China, too.

That's why GM is bringing out this new car. Will it succeed? The automaker's recent track record with products like the Impala suggest it could. I'll know more after I see the car in New York next month.

What do you think? Could a strong new Malibu finally give the Camry and Fusion a run for their money? Scroll down to leave a comment with your thoughts.