If you have your heart set on buying bank stocks, then do yourself a favor and forget about value -- which is typically expressed as the ratio of a bank's share price to book value per share. What matters most is the quality of the bank.

As somebody who reads and writes about banks all the time, I can't tell you how many articles I come across that say such-and-such bank is cheap and therefore an attractive investment compared to another bank that is expensive and should thus be avoided.

This is nonsense. It's worse than nonsense, in fact, because focusing on value will almost invariably lead you to buy a bad bank. And investing in a bad bank puts the entirety of your capital at risk, given banks' vulnerability to outright failure.

The logical error in focusing on value is this: It assumes that all bank stocks oscillate in a band between, say, half of book value and twice of book value. But this isn't true. Some bank stocks -- namely, the ones you'd actually want to invest in -- will persistently trade at a higher valuation than others.

You can see this by comparing US Bancorp (USB 0.68%) and Wells Fargo (WFC 1.52%), which have long been two of the best-run lenders in the country, to the likes of Citigroup (C 0.70%) and Bank of America (BAC 1.09%), two of the worst. During the past decade, the latter have always traded at a discount to the former: 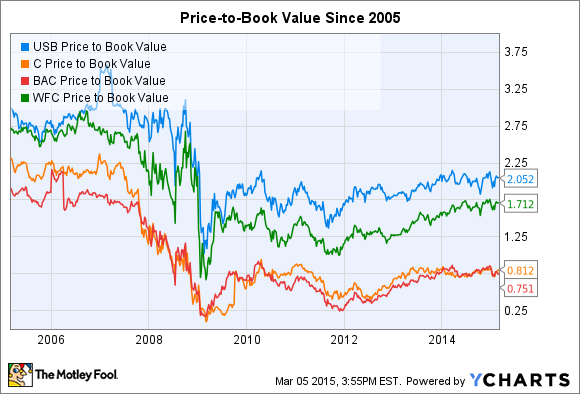 With this in mind, it seems safe to assume that value-oriented investors in 2005 would have concluded that Bank of America and Citigroup were bargains relative to US Bancorp and Wells Fargo. After all, you could have purchased shares of the former at between two and 2.25 times book value, while the latter would have cost you upwards of 2.75 times book value.

But as we came to find out, there was a reason that Bank of America and Citigroup traded at a comparative discount. Thanks to excessive risk-taking and wantonly reckless capital allocation in the lead-up to the financial crisis, both banks came within a hair's breadth of failure following the bankruptcy of Lehman Brothers.

Here's what happened to their stock prices: 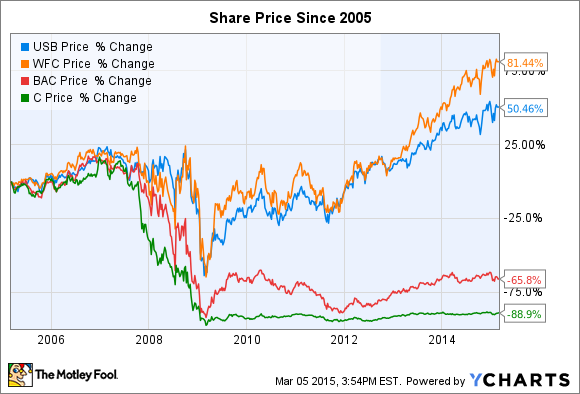 My point is that successful bank investing is less about analyzing how much a bank's stock costs and more about identifying lenders that aren't likely to subject shareholders to failure or egregious dilution in the intermittent, but not infrequent, panics that besiege the financial industry.