Smith & Wesson (SWBI 1.48%) and Sturm, Ruger (RGR 0.20%) couldn't have asked for a better gift from President Barack Obama than the one delivered by the federal Bureau of Alcohol, Tobacco, Firearms, and Explosives, or BATFE. The regulatory agency recently proposed a ban on certain ammunition used in the AR firearms platforms. Although the agency announced on Tuesday that it would not seek to issue the final guidelines "at this time," the mere potential of a ban has resurrected fears that more restrictive regulations are on the way and will likely spur gun and ammunition sales.

Gunning for a backdoor ban
BATFE was going after the 5.56 mm M855 (.223 caliber) round, or so-called "green tip" ammunition. It stoked the fears of gun owners who viewed the proposal as a backdoor attempt to ban the popular AR-15 sporting rifle that is often the target of gun control advocates. Because the green-tip ammo can be used in AR-style pistols, there is concern other ammunition could be banned as well, such as the popular deer-hunting .308 round which can also be used in AR platforms.

The announcement has already driven greater sales on ammunition, mimicking previous sales trends that occur when gun enthusiasts believe stricter regulations are on the way. Since President Obama's first election, the perceived threat of invasive gun control has driven gun sales higher. Particularly in the aftermath of heinous, tragic mass shootings like those at Newtown, Conn., and Aurora, Colo., fears peaked that the rights of gun owners and enthusiasts would be diminished and sales surged. And it wasn't long ago that gun owners had problems finding popular .38 caliber, .40 caliber, and 9 mm rounds in stock at retailers such as Cabela's (CAB) and Dick's Sporting Goods (DKS 0.18%). That dry spell only recently eased up, but now sporting goods stores are also facing the same situation with the AR bullets.

An exemption end run
It's the BAFTE's "at this time" language that will keep the fire burning. With the fear of executive fiat replacing legislative action, gun owners could feel the impetus to buy more firearms and ammunition, which would be good news for Sturm, Ruger and Smith & Wesson, whose sales have recently fallen as background checks returned to more normalized levels. (While the FBI says background checks don't translate one-to-one into gun sales, it's widely considered a proxy for demand for firearms sales.)

Last week, S&W reported net sales fell 10.5% in its fiscal third quarter, only somewhat better than the 22% decline it experienced in both its first and second quarters. Firearms sales, though, were down 14%, causing quarterly gross margin to slide to 34.9% from 40.2% year over year, according to S&P Capital IQ. 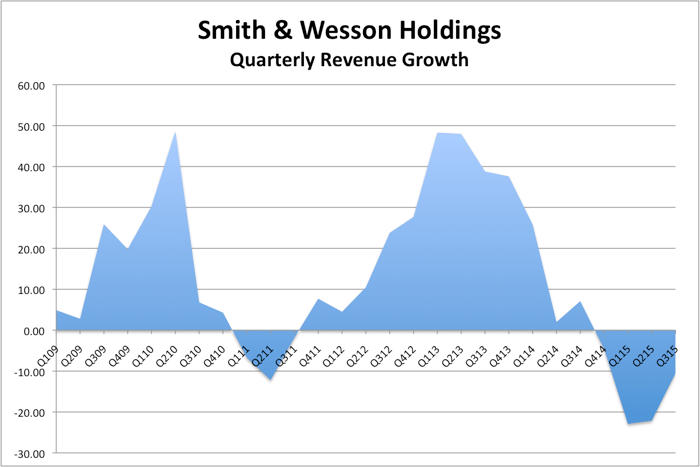 Ruger was worse off, with sales tumbling 32% in its corresponding fourth-quarter report, while sales were down 14% and 42%, respectively, in the second and third quarters. It said sales to independent distributors dropped 21% in 2014 even though there was only a 12% decline in FBI background checks. 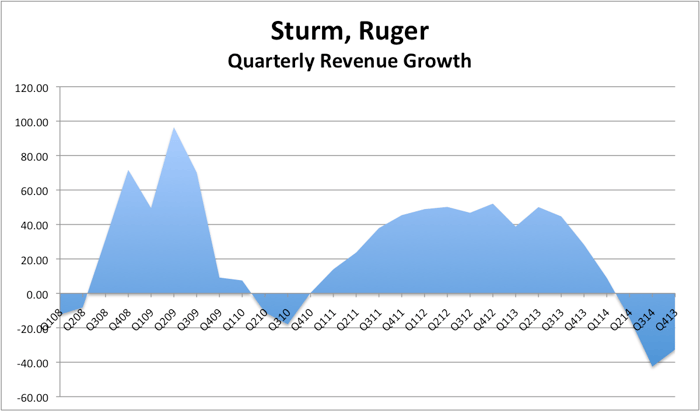 A volatile state of normalcy
After months of falling sales, additional talk of an ammo ban could be the gift these gun makers need to boost sales and profits. Smith & Wesson already raised its full-year guidance, noting the firearms market was "normalizing" after purchases surged in response to the perceived threats of gun control.

Of course, the volatility in the gun industry suggests gun manufacturers' earnings guidance may experience turmoil again as people rush to stock up once more, but the resulting higher sales might cause these companies to shoot the lights out on earnings again.

Follow Rich Duprey's coverage of all the firearms industry's most important news and developments. He has no position in any stocks mentioned. The Motley Fool has no position in any of the stocks mentioned. Try any of our Foolish newsletter services free for 30 days. We Fools may not all hold the same opinions, but we all believe that considering a diverse range of insights makes us better investors. The Motley Fool has a disclosure policy.