Matthew Frankel, CFP, Dan Caplinger, and Jason Hall
(TMFMathGuy)
Author Bio
Matt is a Certified Financial Planner based in South Carolina who has been writing for The Motley Fool since 2012. Matt specializes in writing about bank stocks, REITs, and personal finance, but he loves any investment at the right price. Follow him on Twitter to keep up with his latest work! Follow @TMFMathGuy

Here at The Motley Fool, we are all about long-term investing. We wholeheartedly believe investing for the long haul is one of the most certain ways to create wealth, and is the most effective strategy available to investors.

On the other hand, short-term trading can be a portfolio killer. There are several reasons why such trading is rarely a good idea. Here are three big ones, courtesy of our experts:

Matt Frankel: One way short-term investing can kill your returns is the difference between the long-term and short-term capital gains taxes. Essentially, if you hold your stocks for less than a year, they can be subject to higher tax rates.

On the other hand, short-term capital gains are taxed at the same rate as your marginal income tax rate (your tax bracket). So if you are in the 28% tax bracket, you'll pay 28% of your profit on investments you sold before a year passed. If someone in that tax bracket holds their stocks for over a year, they'll only pay 15% of their profit to the tax man.

In other words, if you earn a $10,000 profit on an investment, you'll walk away with $8,500 if you held the shares for more than a year and just $7,200 if the profit resulted from a short-term trade. As you might imagine, this can add up tremendously over the long run.

Dan Caplinger: Short-term investing comes with a huge number of costs, and even though one of those costs has come way down, it's nevertheless still a factor with certain types of investments and short-term strategies. Specifically, the transactional friction caused by buying and selling stocks is significantly more substantial than many people think, because there are multiple charges to consider.

Clearly, the key transactional cost is the commission, which is transparent and obvious when you buy or sell a stock. For the most part, commission costs have come down precipitously in the past few decades, with the rise of discount brokers making commissions an afterthought in many circumstances.

Yet commissions aren't the only costs involved in trading. Every time you place a buy or sell order on an exchange, you have to deal with market makers that are themselves trying to make a profit. The price that a market maker will offer someone trying to sell their shares will inevitably be less than what that same market maker will charge someone who wants to buy shares. That difference, known as the bid-ask spread, has also come way down over the years, with decimalization reducing the traditional eighth-point fractional spread to just pennies on the dollar. For less liquid stocks, though, the bid-ask spread can still be a huge deal, so it's essential to take it into account in assessing all of your transaction-related costs.

Jason Hall: As Motley Fool portfolio manager Jeff Fisher wrote recently, short-term trading is much more likely to be an underperforming strategy versus an approach focused on the long term.

The worst part? It's not just the lack of returns that hurts; it's the time you lose to grow your returns that you'll never get back. Here's how significant it can be: 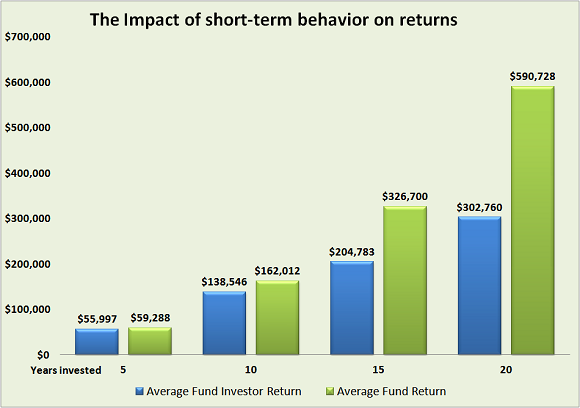 The table above is based on 20 years (1991-2010) of real-world data from a study conducted by Davis Advisors. The average fund returned 9.9% each year, while the average investor in these funds only gained 3.8% per year.

Even worse, you will never get back those 20 years to make up for lost returns.

If you're following a short-term trading strategy today, you're probably underperforming. If that's your situation, stop missing out on superior returns before you leave even more money on the table. Most importantly, stop wasting your most valuable asset: time.