Investor T. Boone Pickens has worked in the oil and gas industry since 1951, and has made, lost, and remade fortunes in the business. At 86, he's still actively involved in the business, and shows up at his Dallas, Texas-based hedge fund every day; that is, unless he's traveling to his ranch in the Texas panhandle.

While his fund doesn't manage the billions of dollars that other big-name investors may have, it's still interesting to review the quarterly 13F filing with the SEC. While I wouldn't encourage investors to use the 13Fs as a way to "copy" Pickens' investments, it can still serve as a tool to look for opportunities.

With that in mind, here are four stocks that Pickens' fund bought last quarter, that stand out as clearly outside the oil and gas world.

Taking the caddy to the bank
Last quarter, Pickens' fund opened or added to its positions in automaker General Motors (NYSE:GM) and megabanks Bank of America (NYSE:BAC), JPMorgan Chase (NYSE:JPM), and Wells Fargo (NYSE:WFC). Of the 33 stocks in the fund's portfolio at quarter end, these clearly diverge from the rest, which are all tied to American oil, gas, and other material resources like aluminum.

Since we don't know when in the quarter the fund bought the stocks, let's take a look at how they have performed since the beginning of the period covered: 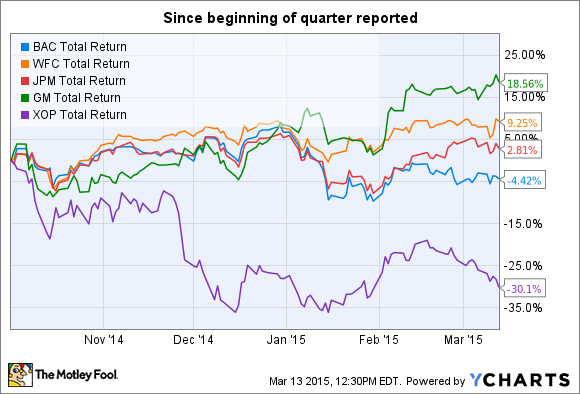 As compared to the SPDR S&P Oil & Gas Exploration & Production ETF (NYSEMKT: XOP), these stocks have held up relatively well, with only Bank of America's stock trading lower than it did at the beginning of the quarter. However, I'm not convinced that the fund was looking for strong capital appreciation with the bank investments.

De-risking via diversification?
The reason I used the Oil and Gas Explorers and Producers ETF as a comparison is because Pickens made it clear late last year that he expected oil prices to stay down for a while, at least until domestic production levels began stabilizing as the rig count fell. With this in mind, there's a strong possibility that Pickens' fund invested in the stability of these banks in order to get some potential return, while waiting for the oil market to stabilize.

Some of that drop was the result of selling, while some of it was most likely losses, but the reality is, the 13F only discloses shares held at the end of the period, so anything beyond that is simply guesswork.

Foolish lessons
Frankly, it's important to realize that 13F filings are of limited use to small investors, due to the very small amount of information they disclose, and the fact that they report holdings potentially months after the fact, with no price information.

But with that in mind, we can look at the bigger picture, and make some conclusions if we're careful. To start, it looks like Pickens' fund was either pulling money out of oil and gas stocks near the end of the year, or maybe even had some fearful investors pull out of the fund -- which wouldn't be a surprise with oil prices falling precipitously in the back half of 2014. However, I'm willing to bet that at least some of the activity at the fund -- including investing in financial stocks -- was part of a strategy to "wait and see" what happens with the oil markets.

At some point, crude oil prices will rebound, and I have a feeling that Boone Pickens' fund will have made big bets on a number of oil and gas producers, and those bets will pay off big. For now, the biggest takeaway is that even investors with special knowledge of a sector -- like Pickens' fund with oil and gas -- should diversify to create a margin of safety. That's something we can all learn from.