Grocery shopping isn't the only reason you go to a Whole Foods (WFM) store. Sure, you'll find the familiar supermarket aisles there. But you're also likely to see restaurant-style eating areas, chair massage booths, wood-burning pizza ovens, and craft beer and wine bars.

Many stores have juicing stations where customers can grab a fresh smoothie to sip as they shop -- or while they wait for a Whole Foods personal shopper to do it for them.

Since it sells experiences like those in addition to groceries, you might guess that Whole Foods makes more money than your average food retailer. And you'd be right. Its gross profit margin weighs in at 35% of sales, compared to 29% for Target, 25% for Wal-Mart, and 13% for Costco.

Yet Whole Foods isn't the grocery store chain that has Wall Street analysts tripping over themselves with price target upgrades right now. And it isn't Whole Foods that's currently the 12th best performer in the entire S&P 500 over the last year. That distinction goes to Kroger (KR 3.28%), with shares that have even given Apple investors a run for their money since 2010.

Here are a few business highlights from this grocer's 2014:

Kroger achieved those results through a retailing approach that's different from Whole Foods' aim to "transform food shopping" into a better experience. In contrast, here's how Kroger's management describes its operating goal in the annual report: "Our ... philosophy is to maintain and increase market share by offering customers good prices and superior products and service."

That's easier said than done. But Kroger can claim a few competitive advantages when it comes to both prices and products.

On pricing, Kroger's $110 billion annual sales base gives it leverage with suppliers that helps keep costs down. In addition, it owns dozens of manufacturing plants that supply a big portion of its products, which also lowers costs. These strengths translate into more room for price cuts. In fact, Kroger spends $3.5 billion annually on cutting its grocery prices. That's equivalent to a quarter of Whole Foods' sales in the last fiscal year.

Right now Kroger is targeting many of those cuts on organic and natural foods. According to CEO Rodney McMullen, the aim is to get the price premium on those products as close as possible to zero:

That's how a lot of Kroger's recent growth is coming from corporate brands like Simple Truth, which was launched less than two years ago and is already worth over $1 billion in annual sales. There are now over 2,700 products in the Simple Truth organic and natural food franchise.

Lower prices and better selection translate into market share gains for Kroger. Mainly that has meant stealing customers from Wal-Mart. But Kroger is increasingly pushing into Whole Foods' territory. The grocer has outgrown the organic food leader for the last four quarters running. 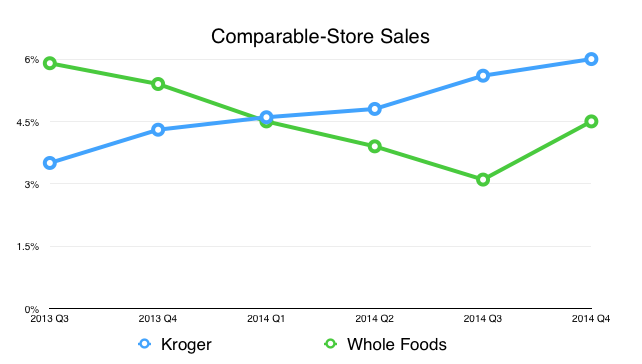 The good news for Kroger investors is that management isn't resting on the stellar results of the last few years. Looking ahead, executives are optimistic that recent Harris Teeter and Vitacost acquisitions can add more growth and new channels like online grocery selling and delivery. Kroger has its work cut out for it if as it fights to stretch its growth streak into a second decade.