AbbVie (NYSE:ABBV) has undoubtedly been one of the best performing healthcare stocks since it was spun-off from Abbott Laboratories in 2013: 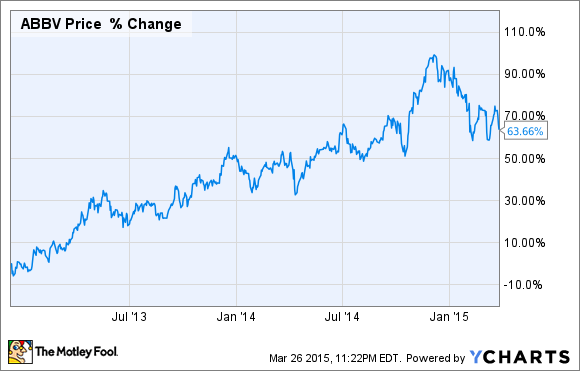 However, many onlookers believe Abbott decided to jettison AbbVie as a way to isolate itself from the patent expiration of the anti-inflammatory drug Humira. Indeed, AbbVie is pretty much the "Humira stock" given that the drug composes over 60% of its total sales, making its patent expiration in late 2016 a major concern for investors.

In a surprisingly rich deal, AbbVie's management recently decided to buyout Pharmacyclics (NASDAQ: PCYC) for $21 billion, mainly for its top-notch cancer drug Imbruvica, as a means to smooth out the company's transition following Humira's patent expiration. In spite of this buyout, though, AbbVie's stock could still be in deep trouble. Here's why.

Humira's revenues are under threat
With Humira's aforementioned patent expiration in the U.S. set for 2016, U.S. sales revenue are expected to drop by 20 to 30 percent in the 2017 to 2018 time frame. That would translate into about $1.5 to $2 billion in sales lost to copycat biosimilars, if they can get past the onerous regulatory process for biosimilars put in place by the Affordable Care Act.

On the bright side, Humira won't go off-patent in most of Europe until 2018, but the company does face a less rigorous pathway for biosimilar entry in the EU once the drug loses exclusivity. As such, AbbVie could see Humira revenues drop by $3 to $4 billion come 2019, relative to today's figures.

The Pharmacyclics buyout isn't ideal
Once you get past the impressive potential of Imbruvica, the Pharmacyclics buyout ends up looking like an accounting maneuver -- i.e., actual net profits probably won't even cover the cost of the acquisition before Pharmacyclics' orally administered BTK-inhibitor Imbruvica loses patent protection in 2026, especially when taking the interest on AbbVie's new debt into account.

Digging into this assertion a bit deeper, AbbVie is forecasting peak sales of the drug to hit $7 billion by 2020. Given that AbbVie believes Imbruvica's profit margin could be improved to a stately 50% at some point, the company would thus have $3.5 billion left over, after accounting for marketing and manufacturing expenses. Then, Johnson & Johnson is owed about half of the net profits, meaning that AbbVie would book around $1.75 billion in profit -- and this is AbbVie's rather optimistic scenario.

The Street believes this final number will be closer to $1.5 billion in net profits at peak. Once you add interest on the new debt back into the mix, it would take AbbVie 15 to 16 years to recoup its initial investment in Pharmacyclics and Imbruvica at this rate. Unfortunately, the drug will lose patent protection well before AbbVie has even made its money back.

So, what AbbVie really did was pay $21 billion upfront in order to bolster its EPS once Humira loses patent protection. In short, the EPS should look acceptable going forward because of Imbruvica's sales revenue, but this is akin to running as fast as you can just to stay in the same place.

Imbruvica's peak sales projections are questionable
Cancer drugs are drawing the ire of payers right now. After successfully forcing Gilead Sciences to slash the price of its hep C drugs, top pharmacy benefits managers like Express Scripts are hoping to do the same thing with costly cancer treatments.

Breakthrough treatments such as Imbruvica may be able to maintain premium pricing levels. But the drug is set to face serious competition in the not-so-distant future, and payers almost certainly will use alternative therapies as leverage to lower costs.

Making matters worse, there are several BTK inhibitors in development across the biopharma landscape that are targeting nearly identical indications (i.e., B-cell malignancies) as Imbruvica. Some of these experimental drugs should eventually reach the market, especially since they are targeting the same basic mechanism as Imbruvica.

What's key to understand is that the current revenue models for Imbruvica -- at least those that I've seen -- do not account for the potential of huge price decreases or the impact of early to midstage rival therapies. Rather, they assume that Imbruvica's stellar clinical profile will allow it to command a premium pricing structure going forward and give it an economic moat against would-be competitors.

As the hep C drug wars have clearly shown, this is probably a highly unlikely scenario, as big pharma enters a new reality where payers have the power to leverage their formularies. As a further example, GlaxoSmithKline relied on similar faulty assumptions for its new respiratory medicines Anoro and Breo Ellipta, only to get stung by U.S. payers in a big way. The net result has been a huge price decrease, massive layoffs, and a revised outlook.

Foolish takeaways
There is a real possibility that AbbVie ends up booking less than a billion in profits from this newly acquired drug at peak -- all for the sake of dressing up its EPS post-Humira patent expiration. So, to make its money back, the drugmaker must be putting an awful lot of faith in Pharmacyclics' clinical pipeline.

In the near term, though, AbbVie's EPS is likely going to tank because of the negative impacts of a $21 billion acquisition, and no meaningful revenue upswing to offset it. After the second quarter of this year when this deal wraps up, AbbVie should thus start posting net losses for multiple consecutive quarters. And that's the underlying reason why AbbVie's shares could tank in 2015.