The long slog downward continued in March, as shares of Arch Coal (NYSE: ACI) fell another 22%. Ever since thermal coal prices started on their downward trend since early 2011, shares of Arch have followed pretty much in lockstep, putting shares down 97% since that time. 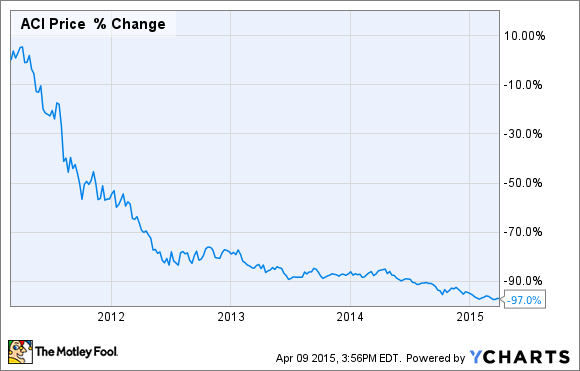 Just about every coal company in the space has been rocked by the precipitous drop in coal prices, but a whole new issue came could alter the landscape even more. This past month, the Obama administration has proposed a change to the way in which the federal government collects royalties from coal produced on federal lands.

The proposed change would mean that the royalty fee for coal produced on these lands would be applied when coal is sold to an unaffiliated buyer, such as a power company or an exporter, instead of the first intermediary buyer, such as a company that cleans or transports coal (most of these intermediaries are owned by the coal companies themselves).

This means the sale price at which the coal's royalty fee is applied will likely be higher, which means the government would get a higher royalty payment and the producer would either have to accept lower margins or increase prices. With natural gas and renewables becoming economically viable alternatives to coal, the chances of higher prices are pretty slim.

For Arch, which produces more than 85% of its coal from federal lands in the Powder River Basin of Wyoming, this change could shrink its already-minimal margins. This news couldn't come at a worse time, either.

This long lull in coal prices has stretched Arch's balance sheet to the point that it hasn't generated enough EBITDA to cover its interest payments over the past 12 months. True, the company doesn't have any major corporate debts due till 2019, but the costs of financing that junk-rated debt will likely continue to weigh on shares of Arch Coal for quite some time.

Somewhere, there's a value investor looking at Arch Coal. Based on the current book value of the company, buying $1.00 worth of tangible book value will only cost you $0.13. But if you think that's a deal, you really need to ask yourself if this company is going to hang on long enough to see an upswing in coal prices. The last 48 months certainly don't support that idea.