What: Shares of the second largest U.S. coal producer, Arch Coal (NYSE: ACI), fell as much as 10% on April 21, following the company's first-quarter earnings release. 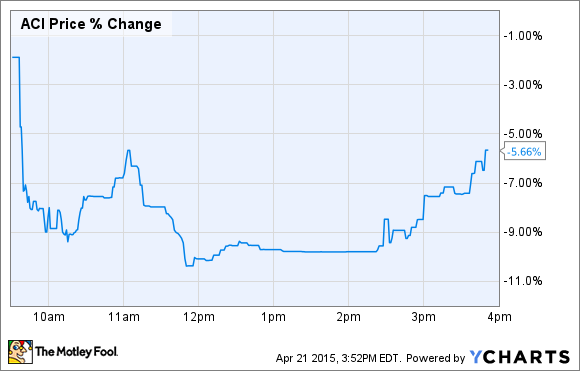 So what: The company reported a $113 million loss in the quarter, which was larger than Wall Street was expecting, though it was a slight improvement from last years' $124 million in the same period. The reality is that coal producers continue to operate in a tough environment, with natural gas prices and lower emissions leading many electric producers to use more gas and less coal.

This puts Arch in an unenviable position.

Now what: The company has more than $5 billion in debt, but almost $1 billion in cash which should provide enough of a hedge to get through this rough patch. But the long-term trends for coal producers aren't exactly in the company's favor, as China -- the world's largest coal importer -- is reducing imports and making efforts to reduce domestic pollution in addition to the wider trend toward cleaner and more sustainable fuels.

There could be some value to be had for patient investors who follow the industry closely, but the average retail investor is probably better off investing in companies with durable long-term advantages. Factor in the cut-throat nature of a commodity business like coal, the cyclical nature of its pricing and demand, and it's hard to predict Arch being a better than average bet for strong investor returns, even at these prices.