If you haven't heard, oil is cheap. For some reason I'm not completely clear on, that means many in the financial media are writing off oil stocks as some of the worst investments to make right now. This just seems like silly short-term thinking. Sure, oil is cheap and profits for oil companies will likely be few and far between. But if history has taught us anything, it's that oil prices rarely stay put for long.

With that in mind, now is one of the better times to load up your portfolio with oil stocks. So let's take a look at what you should look for when investing in this space, and three companies you should have on your radar in the oil industry

Capital creators vs. capital killers
One of the issues that makes it so difficult for the oil and gas industry to maintain long-term success is that it is such a capital-intense business that requires constant spending just to keep oil flowing. Surprisingly, though, only a small handful of oil producers are actually able to generate enough cash from their operations to cover these spending needs -- the capital creators -- while many others prop themselves up by taking on additional debt to cover the shortfalls -- the capital killers.

The reason that finding a capital creator in this space is important is that they are better suited to handle the down times like now, when oil prices are cheap. During times like these, those capital killers find that the credit markets aren't as keen to take on oil debt, and they are then forced into other measures such as asset sales to keep the lights on. By contrast, those companies that have been able to fund development through operational cash flow find themselves in much better financial standing, and aren't in dire straits to find new sources of capital.

Knowing this, it's not that surprising that all of Warren Buffett's investments in the energy space all share this common trait. Here are three companies that really fit the bill that you might want to consider.

ExxonMobil (NYSE:XOM): Yes, that same company that Warren Buffett just unloaded from the Berkshire Hathaway portfolio is one of the better companies in the space when it comes to generating excess capital from operations. This past year alone the company's operational cash flow outpaced capital expenditures by a whopping $12 billion. Having that much extra spending money has allowed ExxonMobil to easily cover its dividend payments, with lots left over to buy back shares. In the past seven years, the company has bought back more than $176 billion worth of its own shares, which is equivalent to buying 85% of its next largest peer, Chevron.

EOG Resources (NYSE:EOG): It's hard enough finding an oil company that generates cash flow in excess of its spending, but to find one that is able to do that and be a specialist in hydraulic fracturing -- one of the more expensive extraction methods -- is like finding a white whale. Yet over the past couple of years, EOG Resources has been able to pull it off. Granted, it hasn't been generating massive amounts of excess cash, but the fact that it has been able to keep its spending within its cash flow, considering it's working with a newer, relatively more expensive drilling technique, goes to show the capital discipline the company's management has employed over the past couple of years not only to avoid overspending, but also to drive down costs to the point that many of its shale drilling positons are making a modest profit even at today's prices. Chances are EOG's next few quarters won't do anything to wow investors with oil prices as low as they are, but management has shown the traits of a company that is ready to handle the ups and downs of the commodity cycle.

Suncor Energy (NYSE:SU): This might be a bit of a surprise to some, because Suncor's primary source of oil production comes from oil sands, and that oil is selling at an even lower price than U.S.- based oil (West Texas Intermediate). What has allowed the company to set itself apart from the rest of its oil sands peers is its integrated offerings, whereby it refines most of its oil sands in-house to either a crude oil that can be sold at global oil prices or as even higher-margin refined products. 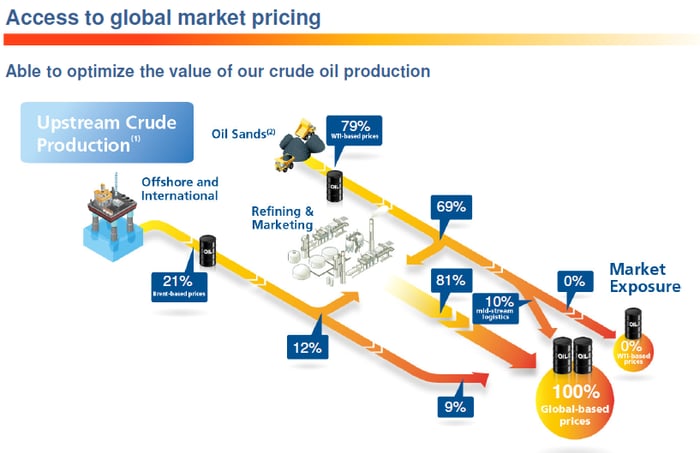 This truly integrated approach -- something that very few companies have anymore because their production centers are nowhere near their refining assets -- has allowed the company to be one of the better performers in terms of generating free cash flow per barrel of oil produced over the past several years. The company has so far taken a pretty big hit in these numbers, which means that it isn't immune to the effects of cheap oil. However, with other investors shying away from oil investments, it may be the most opportune time to pick up shares of Suncor. Warren Buffett just did recently.

What a Fool believes
I'll admit, investing in oil today takes a bit more guts than it did a little less than a year ago -- the specter of cheap oil makes this entire industry look like a dud. The chances of that happening in perpetuity look pretty bleak, though, and those with the stomach to pick up shares in these oil companies with the expectation that an investment could take a couple years to pay off have a chance at being very handsomely rewarded.