Statistically, dividends give investors a better shot at beating the market -- especially if they're reinvested. For instance, over the last decade, the S&P 500 has returned about 77% without dividends, but with dividends reinvested, it returned nearly 119%: 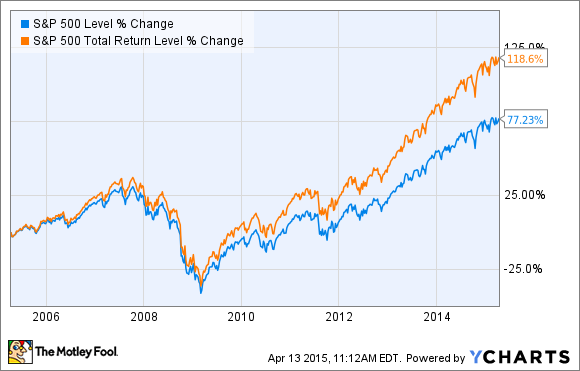 When seeking out dividend stocks in manufacturing, investors should focus on companies with strong balance sheets, cash flows, and the potential for upside. This combination, paired with the ability to return excess capital, will help improve the odds that dividend investors get rewarded over the long haul.

Read on to find out why General Electric (NYSE:GE), Boeing (NYSE:BA), and 3M (NYSE:MMM), are among the best dividend stocks in manufacturing.

Although General Electric's stock has underperformed relative to the market over the last five years, the manufacturing giant has been busy transforming itself into a lean, mean, industrial manufacturing powerhouse that's less sensitive to financial shocks and more capable of returning excess capital to shareholders.

In order to meet this ambitious goal, the company recently announced a historic deal that will greatly reduce its financial exposure and allow it to return upwards of $90 billion to shareholders in the form of buybacks, dividends, and share exchanges through 2018.

Specifically, GE will be selling up to $26.5 billion in real estate assets to BlackRock, Wells Fargo, and other unknown parties. It will also exchange the remainder of its Synchrony Financial stake by the end of 2015 -- and it intends to divest its commercial lending segment and all of its consumer-facing banking platforms sometime in the future.

In other words, the future of GE will be increasingly industrial-focused -- and dividend-friendly.

A gargantuan backlog
Compared to the S&P 500's dividend yield of 1.95%, Boeing's 2% dividend doesn't seem all that impressive. However, what sets Boeing's dividend apart from Mr. Market's is the potential for upside.

With a backlog of $502 billion, a market opportunity estimated to be worth a combined $5.2 trillion over the next 20 years, and solid underlying financials, Boeing likely has a very long runway of growth ahead of it from both a stock and dividend perspective.

To put Boeing's massive backlog into context, it's equivalent to more than five times its 2015 expected sales, acting as a solid business buffer during periods of economic uncertainty. Boeing's backlog also affords it a high level of revenue predictability, because future revenue streams could be determined by meeting production targets that chip away at the backlog.

In 2014, Boeing paid out $2.2 billion in dividends, which represented 39% of its net income and 33% of its free cash flow -- meaning there's likely plenty of room for Boeing to comfortably continue increasing its dividend in the future.

Boeing's most recent dividend increase was announced in December; it raised its dividend payout by 25%. Along with this increase, Boeing announced a $12 billion share repurchasing program -- the largest in company history. Frankly, I wouldn't be surprised if Boeing built upon both of these initiatives next December.

A dividend stalwart
As far as dividend stocks are concerned, there are few that beat out 3M, which has consecutively raised its dividend 56 years in a row, and has paid a dividend without interruption for the last 98 years, giving it quite the reputation.

Since the mid-1980s, 3M's returns -- including dividends reinvested -- have absolutely crushed the S&P 500's return after dividends. That's because compound interest tends to work extremely well when compounding dividend growth is added into the equation. 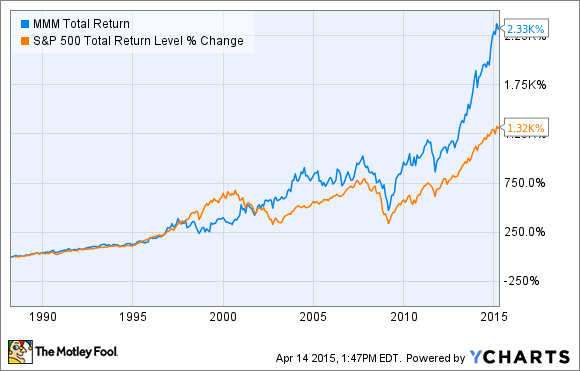 Last year, 3M distributed $2.2 billion in dividends, which equates to about 45% of its net income, and about 43% of its free cash flow. Barring any major changes in 3M's earnings, its low payout ratio gives it the flexibility to raise its dividend without affecting day-to-day operations.

3M has demonstrated that it can handle the Great Depression, two world wars, numerous recessions, and countless other crises -- without ever missing a dividend payment. I wouldn't bet on 3M jeopardizing its 56-year-long dividend-raising streak anytime soon.

Putting it all together
Over the long term, dividend reinvesting is a great way for investors to increase their odds of beating the market. Focusing on companies that have strong track records of paying dividends, rock-solid financials, plenty of free cash flow, and long-term growth potential is a great way to start identifying the best dividend stocks in manufacturing.