The collapse in oil prices over the past year was driven by one major force: Saudi Arabia.

After watching U.S. shale players and countries like Brazil, Angola, and Russia increase oil production and taking market share over the past two decades they're taking back the oil market. The last six to nine months have shown that Saudi Arabia will do whatever it takes to break the back of an oil market it thinks is broken. 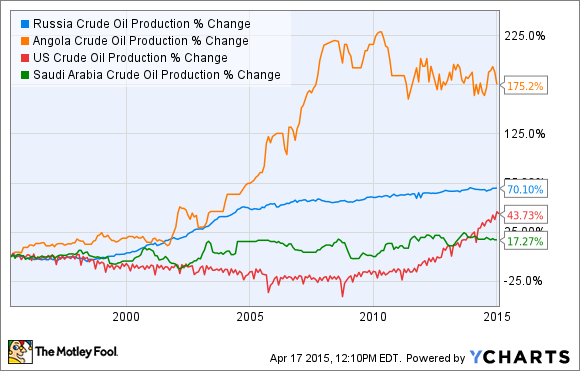 How Saudi Arabia is breaking the oil market
When OPEC announced it wouldn't reduce its oil production quota from 30 million barrels per day last summer it started the decline we've seen in oil prices. Even as production in the U.S. and other countries rose and demand growth slowed, the thought was that OPEC would come to the rescue and bring supply down to demand to maintain prices.

But OPEC, led by Saudi Arabia, didn't do that. In fact, it said it would maintain production, leaving the global market oversupplied by about 1 million-2 million barrels of oil per day.

The goal was to squeeze U.S. shale producers, offshore drillers, and anyone who had a high cost of oil production. As I've written about before, this is about taking back control and market share long-term and Saudi Arabia is willing to give up revenue short-term to accomplish its goals.

Another reason to avoid U.S. producers
We've seen U.S. oil producers like Continental Resources: (NYSE:CLR), LINN Energy (OTC:LINEQ), Sandridge Energy (NYSE: SD), and many other shale drillers pull back quickly on drilling after oil prices fell and if Saudi Arabia keeps up its growing supply there could be more trouble ahead. If I had to bet on the survival of these companies or on Saudi Arabia's ability to stay committed to crushing them my money is on Saudi Arabia.

U.S. producers, especially those who have relatively high costs, simply can't compete if Saudi Arabia and OPEC want to squeeze them out of the market. If oil prices stay near $50 per barrel into 2016 there will be a number of bankruptcies that would have seemed impossible a year ago.

Why oil prices could spike down the road
I've talked a lot about the reason oil will stay low in the near future, but eventually I think prices will spike significantly. Once Saudi Arabia is happy that it's squeezed out enough marginal players out it would make sense to step off the gas and let oil prices rise, maybe to $80 or $90 per barrel where it wouldn't be economical to just ramp up shale production again.

After its increase in production in March it appears that Saudi Arabia and OPEC in general are seeing the value of squeezing the oil market and are going to continue the strategy. Long-term, that could lead to higher prices than we see today and short-term it makes U.S. oil producers an investment I would stay far away from.