If you're looking for the best stocks to invest in wind energy, there are only a handful to consider.

Check out our latest picks for investing in wind energy.

Renewable energy makes up a tiny fraction of both U.S. and global energy production, despite years of growth. And while solar energy gets a lot of the headlines, wind produces eight times more American electricity than its sun-powered counterpart, coming in at 191 million megawatt hours in 2015 versus 23 million for photovoltaic solar, according to the U.S. Energy Information Administration. 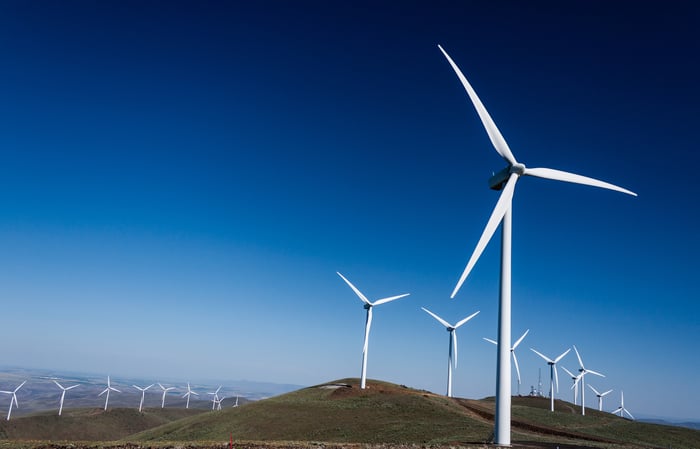 Wind still has plenty of room to grow, too. According to the International Energy Agency, wind is on track to increase from 2013's 2.6% of global energy production to 18% in 2050. Since 2009 the IEA has increased its projections for wind power, citing improved technology and falling costs as well as increased costs for fossil fuels.

Unlike solar and its dozens of companies you can invest in, wind is dominated by a handful of companies. Let's look at the three best stocks for investing in wind energy.

The industrial stalwart with a major energy focus

General Electric Company (GE -2.08%) is one of the world's largest consolidated industrial manufacturers, with a substantial presence in power generation and distribution worldwide.

In recent years, GE has significantly strengthened its global position in energy, including major investments in its gas turbine business, as well as the $13.5 billion acquisition of Alstom's power business, which closed near the end of 2015.

Furthermore, GE has made huge steps to exit finance operations that aren't directly related to its industrial segments, having sold off nearly all of its consumer-related finance business over the past several years. And while this does reduce the upside when the economy is doing well, it has created a much more industrial-focused company with less downside risk tied to weak consumer economic activity.

GE's wind business is a relatively small part of the company's total, but has become more important with the company's renewed focus on industrial customers and the energy sector. And while it may be a smaller part of GE's total business, the company is one of the biggest turbine makers in the world. In 2016, GE received $7 billion in orders for wind turbines, with a strong $2.6 billion of that coming in the most recent quarter.

Vestas Wind Systems (VWDRY -0.59%) competes head-to-head with GE and German industrial giant Siemens. But while its two largest competitors are fully integrated behemoths with operations in dozens of industries and product categories, Vestas is 100% committed to wind.

The reality with the wind business is that despite its strong growth prospects, it has proved to be very cyclical. Wind turbines are typically installed in large "farms," which can cost hundreds of millions of dollars or more and take years of planning. This approach led to big struggles for Vestas in down years, as the company's high fixed costs and big capital expenditures resulted in major losses and negative cash flows from one year to the next: 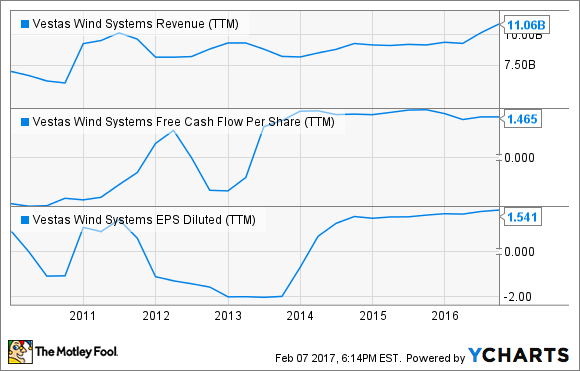 But as you can see, several years' of steady efforts to better-focus the company on its core operations and utilize third party manufacturers for non-core components, has made a major positive impact on the company's profitability.

And while the market cycle for wind turbines is strong now, it will inevitably go through another period of slowing orders before the next upswing. Today's Vestas is well-positioned as a solid long-term investment through the market's cycles.

In 2015, Berkshire Hathaway Energy generated 47% of its total power sold from wind energy -- a number that the company says will go up to 58% by 2017. The company owned 7% of America's total wind generation capacity at the end of 2015; for context, that's six times the capacity owned by the utility with the second-most wind capacity.

Berkshire Hathaway Energy generated $2.1 billion in profits for its corporate parent in 2015, good for 9% of the company's earnings . And through the first three quarters of 2016, the energy segment generated $1.9 billion in income. But that only tells part of the value that wind brings. As Berkshire CEO Warren Buffett described in his 2014 annual letter to shareholders, Berkshire's profits in its other operating segments make it uniquely positioned to benefit from tax credits for wind generation that other utilities can't benefit from as greatly.

In other words, adding wind capacity incrementally boosts the company's retained profits in other segments, by reducing its taxes.

This may not be the kind of thing you build an investment thesis on, but it's another example of how Buffett is able to use all the tools at his disposal to strengthen the company's earnings power. But it's not just tax credits. The U.S. Energy Information Administration projects that the cost of energy production from wind -- without any tax support -- will be cheaper than coal-powered electricity within a few years.

Wind energy projects are big and long-term, and the industry can cycle from a strong year to a weak one quickly. But looking at the bigger picture, wind will continue to become a more and more important part of meeting the world's energy needs. All of these three companies have varied degrees of exposure to wind, but all are set to benefit from it.

Which one is a fit for your portfolio?