Stocks are roughly flat on Friday with the Dow Jones Industrials Average (DJINDICES:^DJI) and the broader S&P 500 (SNPINDEX:^GSPC) up 0.15% and 0.2%, respectively, at 12:15 p.m. EDT. However, it's really another index's show today, with the Nasdaq Composite (NASDAQINDEX:^IXIC) rising 0.8%, hitting new highs after finally closing above its March 2000 high yesterday.

Yesterday, the Nasdaq got help from Google (NASDAQ:GOOG) (NASDAQ:GOOGL) (despite the fact that the search giant missed on earnings-per-share and revenue projections in the first quarter). However, I'm more interested in Amazon.com (NASDAQ:AMZN) today -- shares are soaring 15% on a first-quarter report that included a whopping 15% year-over-year increase in revenue.

Like the Nasdaq, Amazon is also reaching new all-time highs today; unlike the Nasdaq, it has made many other highs since March 2000, leaving the index trailing far behind. While the technology-heavy index is flat over that 15-year stretch, Amazon's shares have better than sextupled (a performance that has also smashed that of the S&P 500, dividends and all): 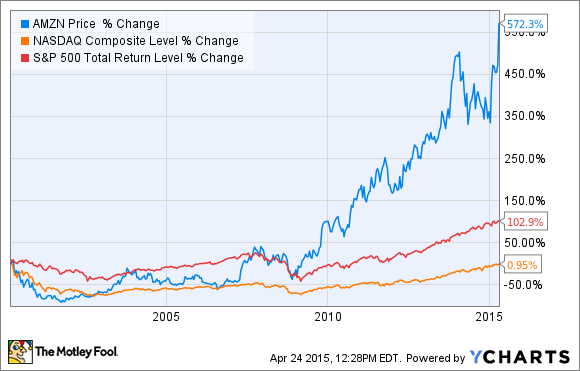 Amazon did not simply survive the dot-com implosion, it is the dot-com era's phenomenal success. After all, how many $200 billion companies actually have ".com" in their name? Kozmo.com never made it past 2001 -- is the name familiar? Ten days after the Nasdaq hit its March 2000 high, Amazon announced it would invest $60 million in the online home delivery service. Less than 13 months later, Kozmo said it would cease operations, lay off 1,100 staff, and begin liquidating assets.

Ironically, in the "Highlights" section of the first page of yesterday's earnings report, Amazon trumpeted:

Prime Now has expanded to Miami, Baltimore, Dallas, Atlanta, and Austin. Prime members can choose from tens of thousands of daily essentials through a mobile app. With Prime Now, two-hour delivery is free and one-hour delivery is available for $7.99.

When Kozmo suspended operations it was delivering the very same kind of goods within an hour in nine U.S. cities for a fee (you ordered online, however -- there was no mobile app, of course).

What was the difference between Amazon and Kozmo? I'm sure there were many, but scale and scope of operations (but mostly scale) were surely crucial. Even today, Amazon generates meager profits, and much of its stock market value is premised on more growth and expanded margins -- the quest for scale continues.

While one can reasonably be skeptical of the stock's valuation, I wouldn't want to bet against Amazon (I'm one of those delighted Prime members, for one thing). There is a momentum to scale, and CEO Jeff Bezos appears to have built an enterprise that justifiably commands a sense of inevitability.