Word that SolarCity (NASDAQ:SCTY.DL) is teaming up with Nest to sell more residential solar systems shouldn't be a surprise to anyone following the leading residential solar company in the U.S. Lead generation is the No. 1 game for SolarCity today and offering a Nest Learning Thermostat free with each system may be a way to attract a few more solar customers.

What's far more interesting is the idea of Elon Musk teaming up his combo of SolarCity and Tesla Motors (NASDAQ:TSLA) with Larry Page and Sergey Brin at Google (NASDAQ:GOOG)(NASDAQ:GOOGL). If they play their cards right, the combination could be an incredible force for change in the energy industry.

But the bigger deal is SolarCity's connection to the Works with Nest program. The program allows Google to gather data about how customers use energy for heating and cooling as well as other connected devices and SolarCity is getting at least a little peak into this data. This will be key information as solar and energy storage systems start to try and match energy generation with energy consumption and utilize storage to lower a consumers' cost.

That integration requires a lot of information about how much energy a home is using and where it's being used. What better way to get information than from the company who is all about collecting information on everyone?

The tip of the iceberg
Where this could get really interesting is if SolarCity can tie into Nest's Rush Hour Rewards program and a growing demand response network throughout the country. That could allow SolarCity customers to pay for energy when it's cheapest and provide energy to the grid when it's most expensive, saving customers even more money than solar systems do today.

For the next phase of this solar revolution to take place companies need to lower the cost of energy storage systems and they need to know how to control the storage system in the background, energy management. Tesla Motors, SolarCity's sister company, thinks it has the first part of the equation and partnering with Google could be the second part.

Not the only player in town
All of this is a great idea for SolarCity, but it's not the only company to combine solar with energy storage and energy management. As you can see below, Nest has also partnered with Enphase Energy (NASDAQ:ENPH) and Sunrun while SunPower (NASDAQ:SPWR) has partnered with Sunverge, Tendril, and EnerNOC (NASDAQ:ENOC) to provide storage and energy management information for residential and commercial systems. 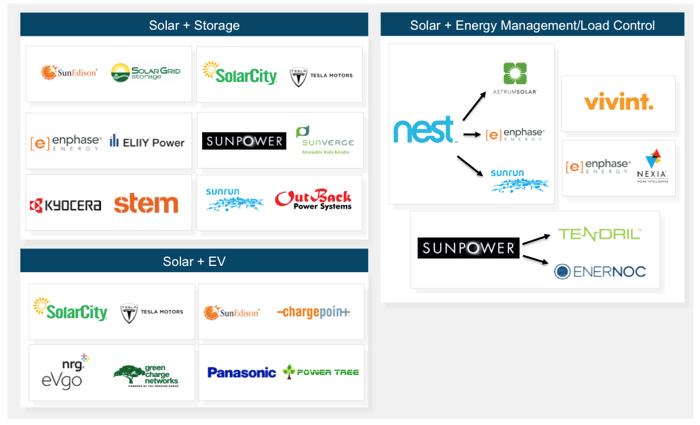 This is becoming a crowded field and, unlike we've seen in the past, SolarCity isn't ahead of the curve at this point.

A big move might be in the cards
SolarCity might not be doing anything new in energy storage or management today, but what intrigues me is the idea of Elon Musk and the Google billionaires working together on the future of energy. Google has long had a desire to get into the energy business, working on leading edge renewable energy until just a few years ago and making the $2.3 billion Nest acquisition to get into the home energy management game.

A complete tie-up between Google's trove of information, SolarCity's massive customer base, and Tesla Motors' energy storage systems would make a lot of sense. The question is how do you make it work?

Google has an interest in partnering with as many companies as possible to make Nest the hub of the "smart home". On the same token, an installed base like SolarCity's with a customer base that values energy independence is exactly what Google is looking for.

In many ways, spinning off Nest, so it isn't tied to Google's Android platform, could make sense and SolarCity would be a logical buyer. SolarCity could use the trove of data Nest provides to make its energy systems smarter and generate more revenue from demand response and other services in the process.

An acquisition like that for SolarCity may seem like a stretch but the company has a big interest in acquiring as much data as possible. Google is a natural partner now and in the future the synergies between the two could grow. However it works out, the idea of Elon Musk, Sergey Brin, and Larry Page working together to disrupt the energy industry is a fascinating idea. I, for one, hope they can make it happen.