Investing in these three stocks could earn you enough money to fund your child's higher education.

To be able to fund your child's college education, you should not only save diligently, you should also invest prudently so your savings can make more money for you. Stocks are one of the best investments you could opt for to see you comfortably through life's key milestones, including your child's higher education.

Of course, you can't invest in just any stock, because only stocks that can grow steadily over time can multiply your returns manifold so as to support a college degree. Fret not, for our Motley Fool contributors believe Brookfield Renewable Partners (BEP 0.07%), Tellurian (TELL -0.51%), and Alphabet (GOOG 1.56%) (GOOGL 1.90%) could do the job.

Maxx Chatsko (Tellurian): Brace yourself: Tellurian has no operations today. That's because it's diligently working to collect regulatory approvals, equity partners, and customers for a massive liquefied natural gas (LNG) export terminal along the U.S. Gulf Coast called Driftwood LNG. It's been a long wait for individual investors, but the pace of developments is finally picking up.

At the end of September 2018, Tellurian received a draft environmental impact statement from the United States Federal Energy Regulatory Commission (FERC) -- the regulatory body that handles all land-based export facilities -- for the Driftwood LNG terminal and the associated pipelines needed to bring natural gas to the facility. The final version should be received by January 2019. Meanwhile, the company expects to announce partners for the project in December 2018, begin construction in the first half of 2019, and manufacture LNG by 2023. 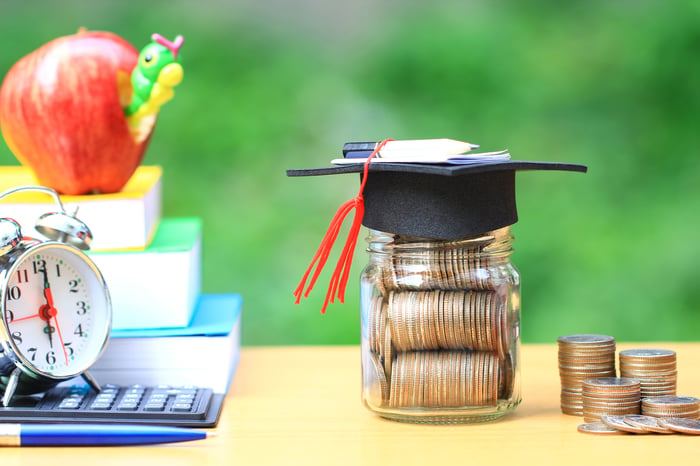 Admittedly, that's a long way away, but individual investors with a long-term mindset are a patient bunch. And the numbers offer a persuasive argument for patience. Today, Tellurian trades at a market cap of less than $2 billion. When Driftwood LNG is up and running, it will churn out roughly 3.5 billion cubic feet per day of product and generate an estimated $3 billion in annual cash flow. Given the structure of contracts and the growing need for LNG globally, the facility should produce relatively predictable amounts of income for decades.

Cheniere Energy, the pioneer of the American LNG industry, provides a hopeful example. It was once where Tellurian finds itself now, but it successfully brought its Sabine Pass LNG terminal online in 2016. It now sports a market cap of $16 billion. Of course, this multiyear process of building Driftwood LNG will be expensive, require gobs of debt, and the alignment of multiple equity partners involved in both the pipeline and terminal. But if Tellurian pulls it off, then long-term investors should be handsomely rewarded.

Neha Chamaria (Brookfield Renewable Partners): The future of energy is, unarguably, renewable energy. The American Council of Renewable Energy projects private investment in the sector to hit $1 trillion between 2018 and 2030. In other words, the clean energy market is only set to grow bigger as more companies and governments across the globe wake up to the impact of environmental hazards and shun fossil fuels. And that could set the ball rolling for a company like Brookfield Renewable Partners.

With $43 billion in assets under management, 876 power generation facilities in operation, and nearly 17,400 megawatts of capacity across North America, South America, Europe, and Asia, Brookfield is one of the world's largest publicly listed renewable energy companies. However, Brookfield stands out even within the clean energy space because of its focus on hydropower, the relatively untapped source of energy. So, while most companies are expanding into solar and wind, Brookfield generates nearly 76% of its power from hydroelectric sources.

Brookfield sells more than 90% of its power under long-term power purchase agreements, which ensures steady and predictable cash flows. Even better, the bulk of those cash flows goes into shareholders' pockets. Management has a high degree of visibility into Brookfield's cash-flow growth, now expecting to grow its funds from operation per unit by 6% to 11% over the next five years. That, in turn, should support annual dividend increases of 5% to 9% during the period.

Add it all up -- the potential in renewable energy, Brookfield's contracted cash flow base, dividend growth, and a beefy yield of 7% -- and you have a money-compounding machine in the making for the long haul.

Too big to fail

Chris Neiger (Alphabet): Alphabet is such a large and well-known company, and that may lead some investors to believe that the company's best days are behind it, but overlooking Alphabet now could mean missing out on investing in one of the most transformational technologies in decades. I'm talking about artificial intelligence (AI), and nearly no one is doing it better than Alphabet.

Alphabet uses AI in nearly every service it has, from its search results to cloud computing, but one key way AI could contribute to the company's business is through its virtual assistant, Google Assistant. The Assistant can be found on Android devices and in Google Home smart speakers, and it allows users to search the internet easily, order products, find out about the weather, check calendar appointments, and a host of other tasks.

This type of AI is essential to Alphabet because more and more people are using voice search to find information online, and every time people use Assistant, Alphabet can collect data to sell more targeted ads to its users. In the most recent quarter, the company's advertising revenue grew 20% from the year-ago quarter to $28.9 billion -- and with Google Assistant, Alphabet is tapping AI to build out its next phase of online search to continue growing those ad sales.

However, that's not the only AI opportunity for Alphabet. Alphabet's self-driving vehicle company, Waymo, uses artificial intelligence technology to create driverless cars, and it's about to launch one of the first-ever commercial autonomous vehicle services. Waymo will start limited driverless ride-hailing services this year and continue expanding it through 2019 and beyond. This matters for Alphabet because Waymo could soon be worth about $175 billion as the company licenses its technology to other companies and uses it for its own ride-hailing services.

For investors looking for an investment that could end up paying off in significant ways, Alphabet looks like a great bet. The company's share price has taken a dive lately, along with the broader market, and this is opening up an opportunity for investors to snatch up shares and benefit from Alphabet's opportunities over the coming years.

How I'm Investing During These Turbulent Times

Is Energy Storage the Key to Unlocking the "Smart" in Smart Homes?