Lumber Liquidators (NYSE:LL) stock has been pummeled by allegations that its flooring poses a health risk because of high levels of formaldehyde, a carcinogen to which children have been found to have an increased susceptibility. Its shares have lost almost 70% of their value over the past year.

A recent study by the environmental group Ecology Center may give the flooring specialist a new headache, as it found that Lumber Liquidators' flooring contains phthalates, a family of chemicals used to soften and increase the flexibility of plastic, vinyl, and other products, but which are suspected of being connected to a global decline in male fertility, as well as issues with asthma, brain development, and the immune system.

Just one word: plastics
Phthalates comprise a group of 25 chemicals that are not illegal to use, although the European Union has banned six of them from use in children's toys. Groups such as Ecology Center are looking to have the plasticizers, as they're called, removed from flooring and other common household items.

One company that the environmental group praised was Home Depot (NYSE:HD), which was cited for taking in the lead in requiring its suppliers to eliminate orthophthalates in all virgin vinyl flooring by the end of 2015. As of the end of the first quarter, it had already achieved 85% of its goal, according to Ecology Center.

The Ecology Center tested flooring samples from five national flooring retailers in seven different states. In addition to Lumber Liquidators, samples from Ace Hardware, build.com, Lowe's (NYSE:LOW), and Menards were taken. The results were as follows: 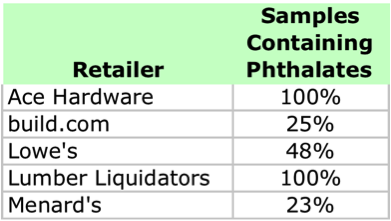 Not all phthalates are created equal
There's a lot of science involved, but phthalates can be broken down essentially into two kinds: orthophthalates and terephthalates. The former -- about 80% of the entire plasticizer market -- are produced in Europe, and virtually all of them (95%, in fact) are used to make flexible polyvinyl chloride, or PVC. It can be found in all kinds of everyday products, including footwear and sports equipment, as well as luggage, hoses, flooring, and wall coverings. Orthophthalates can even be found in medical devices such as tubing and blood bags.

Terephthalates, on the other hand, are biological in nature and not active, so they have no risk for causing reproductive side effects. But that also means they lack durability, so it limits the applications where they can be used. You can find terephthalates in things like water bottles.

Home Depot's leadership in eliminating orthophthalates from its inventory is likely to accelerate the cause, with the rest of the industry falling in line behind with alternatives deemed safer. While cork, wood, and tile are options to phthalate-containing vinyl flooring, there are a number of synthetic and bio-based plasticizers that manufacturers are beginning to use.

As the Healthy Building Network notes, though, plasticizers, whether from phthalates or not, still create exposure issues, though the degree of risk is greatly reduced when moving away from phthalates.

Total flooring sales accounted for over 7% of Home Depot's $83.2 billion total revenues in 2014, or almost $6 billion, a 4% increase from the year before. The category represented $3.2 billion in sales for Lowe's last year, or 6% of its $56 billion total revenues. Lumber Liquidators had over $1 billion in total sales in 2014. How much of the revenues are related to phthalate-containing flooring is not broken down.

At least Ecology Center says Lumber Liquidators is working with its suppliers to reduce the levels of phthalates in its vinyl flooring products. The environmental group said the other three retailers -- build.com, Lowe's, and Menards -- never responded to the group's request for information and they have no publicly available statement on their policies toward the chemicals.

Sweetening the pot
Making products used in and around the home safer and more environmentally friendly has picked up steam in recent years, and more often than not Home Depot has taken a leadership position.

For example, while Lowe's recently announced that over the next 48 months it will phase out the sale of products containing neonictinoids, a group of pesticides that have been linked to colony collapse disorder in honeybee populations, Home Depot began an effort last summer to require suppliers to label their plants if they contained the pesticide and was working with them to eliminate it.

That was followed by a similar effort at Whole Foods Market, which adopted a rating system that restricted or prohibited a whole range of pesticide usage, including the neonics.

Bee-friendly plants will be appearing at both Home Depot and Lowe's as environmentally dangerous pesticides are eliminated. Photo: Wonderlane.

Getting out in front of a problem
Lumber Liquidators stock was sunk by the formaldehyde allegations. It's a risk that exists for Home Depot (and Lowe's, too) as it sources its flooring from China as well, even though the news magazine that exposed Lumber Liquidators said the DIY big-box store passed its tests.

By being proactive and getting ahead of these potential controversies, Home Depot not only insulates itself from lawsuits but also provides a competitive advantage that could just translate into higher sales.