Please ensure Javascript is enabled for purposes of website accessibility
Log In Help Join The Motley Fool
Free Article
Join Nearly 1 Million Premium Members And Get More In-Depth Stock Guidance and Research
By Anders Bylund – May 5, 2015 at 10:55AM

Sprint missed Wall Street's earnings targets in the fourth quarter, but the business model is finally starting to look healthy.

This morning, Sprint (S) reported results for the fourth quarter of fiscal year 2014. Sprint's numbers fell just short of analyst estimates, but investors largely took the miss in stride. Shares zig-zagged in premarket action and by 10:40 a.m. were down about 0.35% from the previous close.

Sprint's sales fell 6.7% year over year, landing at $8.3 billion. The Street was expecting slightly more, with consensus estimates pointing to $8.5 billion. On the bottom line, Sprint reported a net loss of $0.06 per share. That's down from a $0.04 loss per share in the year-ago period, and worse than the $0.05 loss per share that analysts were looking for.

In other words, Sprint customers are spending more on new devices but they have also figured out that financing plans are more affordable than the old model with subsidized phone sales tied to costly service contracts.

In the fourth quarter, 37% of Sprint's postpaid device sales arrived through equipment installment plans, which did not exist a year ago. Another 16% of these sales were structured as lease plans, down from 29% in the year-ago period. Taken together, these options accounted for 53% of Sprint's postpaid sales, up from 28% in the fourth quarter of 2013.

Sprint added 1.2 million net new customers in the fourth quarter, though most of these signed up for less desirable prepaid plans.

In the more profitable category of postpaid plans, Sprint added 211,000 net new subscribers. That's up from 30,000 in the third quarter and a loss of 231,000 customers in the year-ago quarter, but not terribly impressive next to the other national networks.

Moreover, Sprint actually lost 201,000 postpaid phone customers in the fourth quarter. The postpaid totals rose thanks to surging interest in tablet connection plans, with 349,000 new customers in that segment. 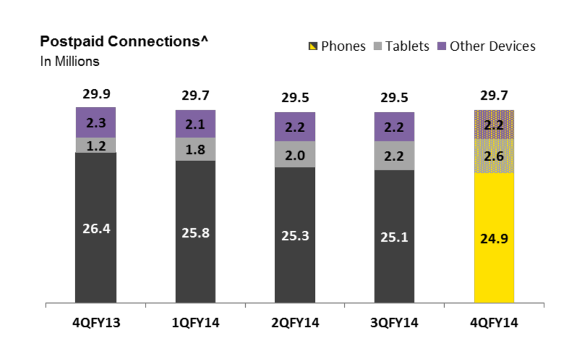 Of course, Sprint's management is well aware of the company's underdog status, and working to overcome it.

"I am proud of the team for successfully executing the first phase of our strategy to stop the decline in customers," said CEO Marcelo Claure in a prepared statement. "We are now one quarter into the second phase, focusing on attracting more quality customers, retaining our customers through a better customer experience and continuously improving the network."