Learn four key facts about how Exxon is investing in the long-term growth of both its production and dividend, despite the worst oil crash since the financial crisis.

With oil prices cut in half over the last 11 months the issue of how oil giants such as ExxonMobil (XOM 0.69%) are maneuvering to ensure production, profit, and dividend growth over the next few years is of paramount importance to long-term investors. Learn four key facts from this quarter's earnings conference call courtesy of Jeff Woodbury, vice president and head of Exxon's investor relations, about how the company plans to continue rewarding investors with long-term dividend growth and market-beating total returns even if oil prices remain low.

Currently we'll range in anywhere from the 1.5 to 2 million barrels a day over supply. General feeling is that as you get into the second half we'll see more conversions toward a balance supply demand. But as we all know there was a significant inventory build in 2014 due to the oversupply and that is continued year-to-date. ... While we may converge in the second half of the year, I'd tell you that there is still a lot unknowns and one of them being is how the unconventional production levels in the U.S will trend over time despite the fact that we've seen significant reductions in rig counts.

So basically Exxon agrees with the International Energy Agency's outlook that supply and demand may equalize by the fourth quarter of 2015. But it is wisely not relying on a sustained short-term recovery in oil prices. 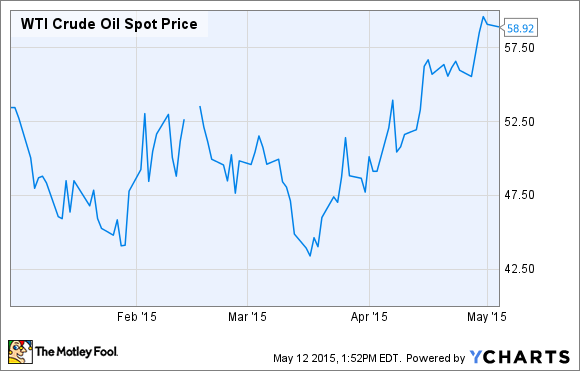 With oil having rallied sharply off its late-March lows, EOG Resources and other low production-cost oil companies have said they could restart drilling if the price of West Texas Intermediate crude rises to $65 per barrel. Meanwhile, Pioneer Natural Resources could restart drilling as early as July, and Carrizo Oil & Gas, Devon Energy Corp., and Chesapeake Energy Corp. all recently increased their guidance for 2015 petroleum production.

Thus, U.S. shale producers remain a wild card in terms of whether the recent oil rally proves to be a medium-term event or if oil prices wind up stuck much lower than in recent years due to continued production growth from North America.

Exxon plans for the long term

We are fairly confident given the range of variables that we test that we're looking at about a 35% growth in energy demand between 2010 and 2040. Fundamentally that is how ExxonMobil sets its investment plans.

Long-term income investors should take heart in such statements that show that Exxon isn't overly concerned with short-term commodity fluctuations but rather has its eyes on the bigger prize. That being said, Exxon has significant experience with oil market cycles and is taking advantage of the industry downturn to decrease its future expenses and improve margins.

Cost savings are a priority

We've captured about an incremental 20% reduction in our well cost from the lower 48 to unconventional place in terms of our spend level ... we've signaled a $34 billion (capital expenditure) target for 2015, we are making good progress and capturing the savings as I said that was incorporated into that spend level.

This quote refers to the fact that oil service rates have fallen in recent months as the number of active U.S. land rigs has dropped by half over the past year.

This allows Exxon, with its enormous access to cheap capital, to take advantage of strategic opportunities -- such as acquiring assets at fire sale prices -- and to lock in much lower drilling rates for projects it planned to do anyway.

Dividend growth and buybacks are safe

We remain committed to our shareholders to invest in attractive business opportunities that are accretive to financial performance and to continue paying a reliable and growing dividend ... share purchases to reduce shares outstanding are expected to remain at $1 billion in the second quarter of 2015. 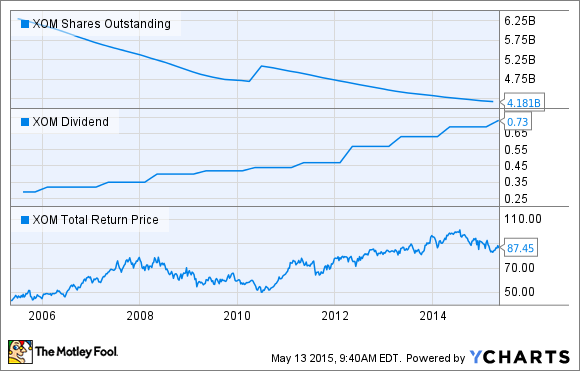 As this chart shows, over the past 10 years Exxon has reduced its share count by a compound annual rate of 4%, which has helped it to grow its dividend and total return price at compounded annual rates of 10.5% and 8.1%, respectively.

Note that the slight bump in shares in 2010 was due to the $41 billion acquisition of XTO Energy, which resulted in some temporary share dilution.

Takeaway: Exxon's long-term strategy remains intact, which should cause dividend investors to cheer
Oil price volatility isn't anything new, and Exxon has plenty of experience in dealing with such industry downturns. Its current focus on minimizing costs, pursing profitable future investments, and rewarding investors with large buybacks and dividends should help it to deliver market-beating total returns in the years and decades to come.

Adam Galas has no position in any stocks mentioned. The Motley Fool owns shares of Devon Energy, EOG Resources,, and ExxonMobil. We Fools may not all hold the same opinions, but we all believe that considering a diverse range of insights makes us better investors. The Motley Fool has a disclosure policy.