Moreover, more people believe gun ownership provides protection from crime rather than it making a household more dangerous. Fifty-seven percent of Americans feel guns do more to protect people from becoming crime victims, while 38% say they do more to endanger personal safety.

A seismic shift in sentiment
These figures are very different to how people felt in the aftermath of the tragic shooting in Newtown, Conn., in December 2012. The murder of 20 children and six adults at Sandy Hook school was a seminal event in the debate over gun ownership and control, and at the time, just 45% of those surveyed by Pew thought protecting gun owners rights was more important, while 52% said stricter gun laws were a priority. As we see, the numbers have almost completely reversed since then.

And while people have always felt guns protected you more than they thought they made things more dangerous, in January 2013, when Pew last asked, it was a narrower 48% to 37% split.

Ironically, the more recent polling data may ultimately prove to be a big problem for the companies that make guns and the retailers that sell them. The imperative behind surging gun sales has been the likelihood the right to own them would soon be greatly restricted. A groundswell of support for gun ownership rights, though, dramatically reduces that probability and the need to rush out and buy one now -- today! -- is removed.

Shooting out the lights
The gun manufacturing industry has been growing like gangbusters. The Bureau of Alcohol, Tobacco, Firearms, and Explosives said more than 10.8 million pistols, rifles, and shotguns were produced in 2013 (the most recent data available), a 26% increase over the prior year, and almost double the number made in 2010.

The FBI conducted a record 21.1 million background checks on people who wanted to purchase firearms the year after Sandy Hook. Although the number of criminal checks eased back slightly in 2014, the 20.98 million people the FBI investigated were still the second largest number processed. 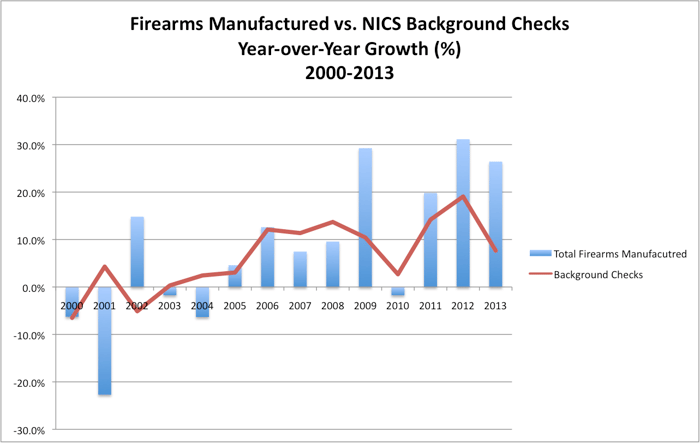 Similarly, sporting goods retailers like Cabela's also enjoyed a 60% jump in shares. Dick's Sporting Goods had a more muted 29% increase in its stock's value, but that might have been due to its decision to suspend sales of certain gun styles nationwide.

Looking down the barrel
However, 2014 saw the ardor for firearms sales cool. As it became apparent the movement to ban guns, or restrict their sale and ownership, had faltered, the imperative to rush out and buy a gun cooled right alongside it.

Revenues at Smith & Wesson for the last calendar year were down around 16% (its fiscal year ends in April), and down 20% at Ruger. Both attributed higher inventory levels at retailers as being the cause for the slowdown in sales, meaning all of those guns they had been producing suddenly ran into a brick wall. 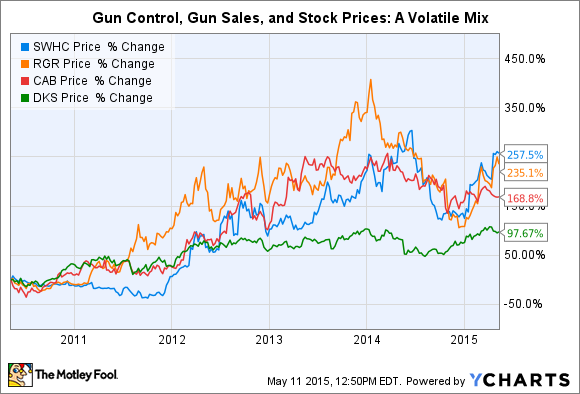 Now, both manufacturers see the industry returning to more normalized levels. It's true that 2013 was an incredible boom year, and 2014 was something of a bust, and by looking out over the rest of 2015, and gauging it by 2012's results, gun manufacturers feel good about how they'll do.

Yet that underscores why the Pew Research Center survey could be worrisome for gunmakers.

The new normal
Without question, it's been the fear of restrictive gun laws that has motivated sportsmen, hunters, and enthusiasts to buy a firearm now instead of waiting for when it may be too late. It was the threat that President Obama, from the time he was first elected, would enact legislation that propelled gun owners to buy more and earn him the title of "the greatest gun salesman ever."

And though rumor of Obama using executive action to enact gun control remains an undercurrent in certain gun enthusiast circles, and may even be helping to prop up sales, the Pew survey shows there's little chance of any legislative action succeeding.

When the majority of Americans believe guns not only make you safe, but that owners need to have their rights strengthened, it will be a cold day before legislation will be passed that undermines them. And that suggests people won't be rushing out to buy a gun right away; they'll defer their purchase instead.

It's that scenario, the survey numbers show, that could be the most troubling to gunmakers. The stocks of Smith & Wesson and Sturm, Ruger are up around 60% year to date, but investors may want to temper any further enthusiasm they hold for those stocks rising more.