Celgene Corp. (NASDAQ:CELG) has been one of the fastest-growing biotechs for several years running now, fueled mainly by its megablockbuster blood cancer drug Revlimid. The company's ability to continually expand Revlimid's label for new indications, such as newly-diagnosed multiple myeloma, most recently, has repeatedly driven earnings and revenue to exceed annual guidance: 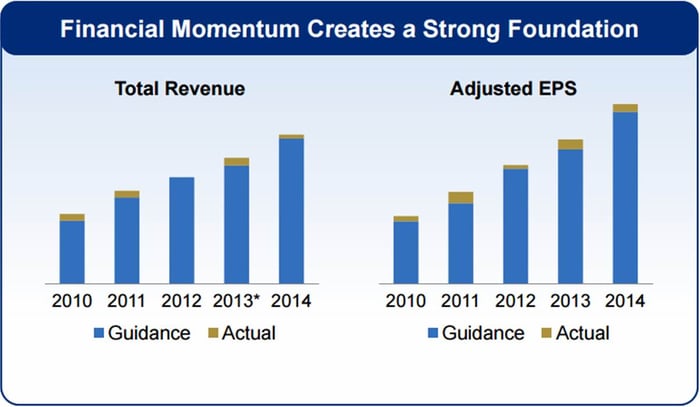 Celgene has also been successful at applying a similar approach to its other top cancer drug, Abraxane, and its new anti-inflammatory medicine Otezla.

The net result of this "growth by label expansion" approach has been soaring sales volumes for these key drugs. And this tremendous upswing in volume has been the main driver behind the biotech's 20% annual average growth rate over the last five years.

The market has thus rewarded Celgene with a constantly rising share price. Most interestingly, though, the market has demonstrated that it's willing to pay a hefty premium for Celgene's strong earnings -- shown by its historical price-to-earnings ratios below: 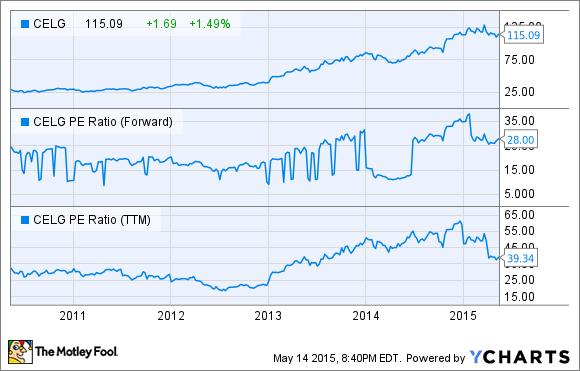 It's not just about Celgene's skyrocketing revenues, though. Fellow biotech Gilead Sciences (NASDAQ:GILD) has also been seeing its own revenues soar due to sales of its hepatitis C drugs. Yet, the market has clearly shown that it values Celgene's cancer drug revenues more than, say, treatments for infectious diseases: 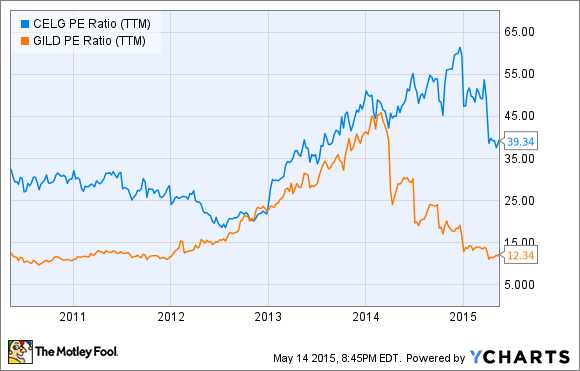 Based purely on its underlying fundamentals, though, Celgene looks grossly overvalued compared to most of its healthcare peers:

Despite this relatively high trailing-12-month P/E ratio, I think Celgene breaks traditional valuation rules and remains a compelling buy because the company has several key advantages over its peers. Let's take a deeper look at why Celgene's stock should continue to push even higher going forward.

Celgene breaks all the rules
Despite this sky-high valuation, I believe Celgene is poised to grow even more and continue to be an industry leader in the oncology space. And, because new cancer drugs are extremely difficult to develop (around 90% of experimental candidates fail in clinical testing), Celgene possesses a strong competitive and economic moat against would-be competitors.

The biotech's cash flows have also been growing at a steady clip for years, and more impressively, this growth looks sustainable over the long haul. Revlimid sales, for example, are on track to reach $7 billion by 2017, up $2 billion from 2014. Furthermore, management believes Otezla can eventually reach blockbuster status, meaning sales are estimated to grow by around 500% from current levels.

When it comes to management quality, Celgene is second to none in the biotech industry. The company's management has shown time and again that it knows how to guide drugs through the onerous regulatory review process, creating substantial value for investors along the way.

At present, management is further showing its worth by maximizing the company's tremendous cash flows to fund a reported 50 preclinical and clinical studies. This clinical trial bonanza will surely help to maintain Celgene's position as a top dog in the high-growth oncology market.

Is Celgene a strong buy right now?
I think, for me, the answer to this question is a resounding yes. While a purely fundamental view would seem to suggest otherwise, Celgene's true value can't be assessed by financial metrics alone -- it  breaks the rules. The company's top-notch management, growing cash flows, and aggressive approach to clinical development make this stock a great long-term buy, in my opinion.