Paying attention to the stocks that billionaires are buying can give investors insight that helps frame their own decisions, especially when the billionaires are investing legends Warren Buffett, George Soros, and David Einhorn.

Because these billionaires have proved themselves through both thick and thin markets, let's consider three companies that they've decided to buy and whether investors ought to consider picking up shares in them, too.

No. 1. Precision Castparts Corp. (NYSE:PCP.DL)Warren Buffett didn't become the planet's richest investor by chasing short-term profit. Instead, he's built up his billions by finding great, undervalued companies that can drive profit for years to come.

Although we don't know exactly when Buffett stepped in to increase his stake, it could have been after Precision Castparts' mid-January collapse. Shares slid from $220 to as low as $186 after the company warned that falling demand from its oil and gas customers meant that its fiscal third-quarter results would come in sharply below expectations.

Obviously, Buffett thinks that worries over sluggish demand from energy customers will be short lived and that rising airplane production trends will help earnings grow over the long haul. That's not an outlandish bet, given that improving global economies could help energy prices firm up and that a wealthier global population is likely to support airline travel. However, investors thinking about following Buffett's lead on this one may have to be patient, because there's no certainty on when this company's outlook will perk up.

No. 2. Lennar Corp. (NYSE:LEN)George Soros is legendary for his ability to spot trends quickly and profit from them. Last quarter, his biggest bet suggests that the U.S. housing market is about to get a lot better.

In the first quarter, Soros acquired a 2.4 million-share stake in homebuilding leader Lennar Corp. that's worth more than $75 million.

The acquisition comes on the heels of Lennar's first-quarter report, in which sales and earnings topped analyst estimates in March. Importantly, Lennar also reported that its new order growth and backlog growth improved by 18% and 20% versus last year, respectively. Since double-digit growth in those metrics could provide sales and profit tailwinds throughout the summer building season, Lennar's revenue and profit could be ready to head higher.

But Soros doesn't think the recovery in housing will begin and end with Lennar. He also established new positions in homebuilders D.R. Horton, Inc., Pulte Group, Inc., and Toll Brothers. Those bets could pay off handsomely, given that April housing starts jumped 20% month over month to an annualized 1.14 million pace -- the best reading since the recession. 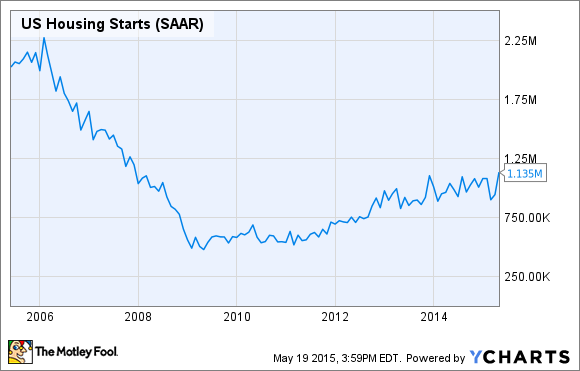 No. 3. General Motors (NYSE:GM)David Einhorn is one of the most-watched hedge-fund managers in the country, for two reasons. His hedge fund, Greenlight Capital, manages $8.1 billion, and Einhorn accurately predicted the implosion of Wall Street iconic brokerage house Lehman Brothers.

In the first quarter, General Motors was Einhorn's biggest new buy. Einhorn picked up 9.47 million shares in the Detroit automaker, worth more than $331 million.

Einhorn isn't new to General Motors. He held a stake in it a year ago, but after exiting that position he seems to be warming up to the company again. In a letter to his investors, Einhorn remarked that General Motors is a year closer to returning to profitability in the key European market and that lower gas prices should support sales of more profit-friendly SUVs and trucks in the United States.

That could already be happening. During the first four months of this year, European passenger vehicle registrations are up 8.2%, and according to Ward's Automotive, sales of domestic light trucks are up 10% this year.

Tying it together
There are a lot of reasons these billionaires are buying shares in these companies, including their short-term views, overall portfolio weightings, and other investment opportunities. While investors shouldn't ignore the fact that Buffett, Soros, and Einhorn are buying stakes in these companies, they should still do their own research and develop their own long-term thesis before following in their footsteps.