Please ensure Javascript is enabled for purposes of website accessibility
Log In Help Join The Motley Fool
Free Article
Join Nearly 1 Million Premium Members And Get More In-Depth Stock Guidance and Research
By George Budwell – May 24, 2015 at 8:59AM

George Soros is one of the most closely watched figures in the investing world. Retail investors, though, shouldn't necessarily take cues from his hedge fund. Here's why.

George Soros is easily one of the most successful hedge-fund managers of all time. During his tenure as the head of the Quantum Fund, for instance, he was able to generate annual returns in excess of 30% year after year.

Unlike Warren Buffett and other classic value investors, however, Soros rarely uses a company's underlying fundamentals to guide his investing decisions. On the contrary, he looks for bubbles, within individual industries or the market as a whole, that can be exploited as they either rise or fall.

Given the key role market psychology plays in his complex investing philosophy, it shouldn't come as a surprise that Soros is also known to diverge from his superinvestor peers by regularly taking out positions in alarmingly risky stocks -- companies more traditional high net worth investors wouldn't dare to own.

Over the last few quarters, for example, the Soros Fund Management has taken out positions in several small-cap, clinical-stage biotechs like Kite Pharma (NASDAQ: KITE) and Sarepta Therapeutics (NASDAQ: SRPT).

As both of these companies have no approved products to speak of, rely mostly on secondary offerings to raise capital, and essentially have unproven drug development platforms, they are the epitome of "high risk" investments in many ways.

Market psychology doesn't always predict winners in biotech
The chart below shows the performance of Kite and Sarepta's respective share prices over the period the fund held the shares: 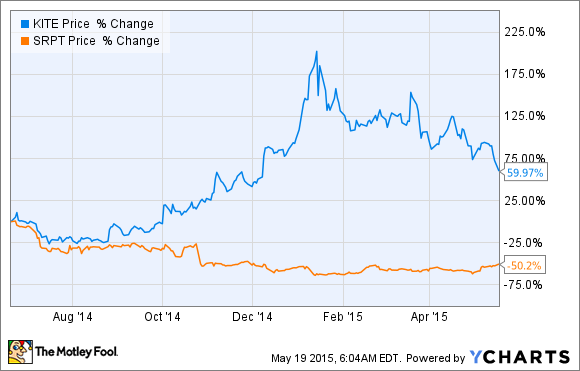 Kite's shares have since ripped higher, fueled by the early-stage success of the company's lead clinical candidate, KTE-C19, indicated as a therapy for aggressive non-Hodgkin's lymphoma.

Sarepta's shares, on the other hand, imploded because of management's inability to advance the company's experimental Duchenne muscular dystrophy, or DMD, drug, eteplirsen, toward a regulatory filing with the Food and Drug Administration, or FDA. Although the FDA finally agreed to review the drug last week, sending shares soaring, Soros unloaded his entire position in the fourth-quarter of 2014.

The reason he initiated these speculative positions in the first place, however, probably has more to do with what was going on around these stocks -- rather than something intrinsically compelling about these companies in particular.

Kite, for instance, is an immuno-oncology company, which is a field that has been absolutely bonkers since Bristol-Myers Squibb (NYSE: BMY) and Merck's (NYSE: MRK) brought their potent cancer-fighting PD-1 inhibitors to market in nearly record time.

Indeed, numerous early stage immuno-oncology companies have seen their share prices lift off into the stratosphere in the past year: 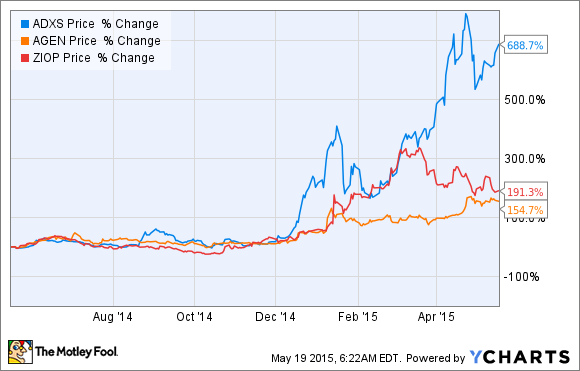 In a similar manner, Sarepta is working in an extremely hot field in biopharma -- namely, treatments for rare diseases.

Over the last decade or so, rare disease drugmakers have frequently garnered massive premiums via buyouts -- even while their flagship product candidates are still going through clinical trials.

BioMarin (NASDAQ: BMRN), for example, snapped up Sarepta's main rival Prosensa for a hefty premium last year, despite the fact that its DMD drug candidate essentially flamed out in late-stage testing.

Armed with this insight, these two high-risk positions appear to be a Soros' means of exploiting the high level of investor interest in the areas of immuno-oncology and rare diseases.

As Sarepta's cliff-diving share price illustrates, though, biotech stocks can be extremely poor vehicles for trying to play overarching trends in the market. After all, one company's breakthrough in a given area of biopharma by no means guarantees success for others.

Soros tries his hand at the gene-therapy craze... and fails
Per the recent 13F filings with the SEC, we learned that Soros again tried to apply his market psychology approach to a burgeoning area of biotech, gene therapy, only to get stung by the harsh realities of the industry.

Gene therapy stocks have generated significant interest among investors ever since bluebird bio (NASDAQ: BLUE) reported that its second-generation gene therapy, LentiGlobin BB305, was a safe and effective treatment for patients suffering from the rare blood disorder called beta-thalassemia.

According to the company, the first four patients receiving the therapy have been transfusion-free for several months, meaning that it looks like functional cure for beta-thalassemia.

The company's share price has skyrocketed higher as a result: 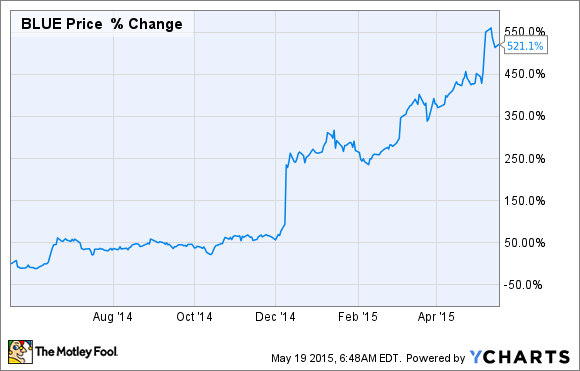 Despite this major breakthrough, gene therapy as a whole has a long history of disappointing investors and clinicians alike.

And Soros' gene therapy pick during the first-quarter of 2015, Celladon, was no exception.

The Soros Fund bought 120,000 shares of Celladon ahead of the midstage data release for its flagship product candidate, Mydicar, as a potential treatment for systolic heart failure. 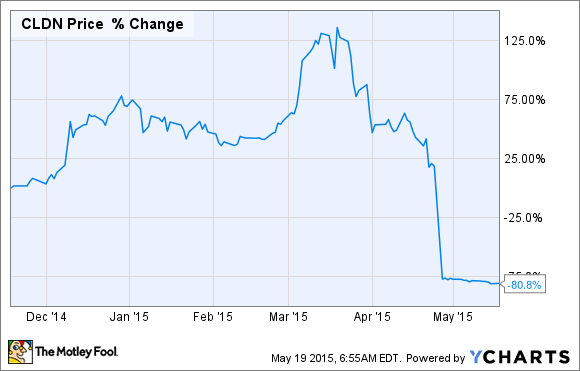 And the key takeaway is ...
Soros can afford to take out high-risk positions that give him access to emerging trends because of the enormous size of his hedge fund. At the end of the day, the fund can lose a few million on a single stock without much of a consequence. And as the Kite and Sarepta examples demonstrate, his fund, on balance, comes out ahead because it is able to play dozens of trends simultaneously.

The same probably can't be said for most retail investors, though. Having a position lose 80% of its value in short order tends to be painful, and it's not easy to efficiently spread the risk across several areas with limited funds.

That's why it's generally a better idea to stick to companies with approved products, solid management, and growing cash flows. These particular traits can see companies through nearly any kind of market, and allow investors to avoid the costly mistake of losing a large chunk of their capital by swinging for the fences, so to speak.

So, while the temptation to follow investing gurus like Soros into potential home run stocks might be extremely enticing, you have to keep in mind that they are able to manage risk in ways that are simply unavailable to most investors. And as the factory of sadness known as Celladon shows, the risk with these types of stocks is all too real.

George Budwell has no position in any stocks mentioned. The Motley Fool recommends BioMarin Pharmaceutical and Bluebird Bio. We Fools may not all hold the same opinions, but we all believe that considering a diverse range of insights makes us better investors. The Motley Fool has a disclosure policy.