Fool contributors chip in their thoughts on why now looks like a good time to buy stock in Disney, Whole Foods, Michael Kors, LinkedIn, DSW, Intel, Frontier, and AMC Networks.

June is here, and with the new month comes a great time to find some new stocks, or old favorites, to invest in. The market's always changing and it can be hard knowing where to look. To help you out we asked a panel of Fool contributors covering technology and consumer goods stocks to present their best buys for June. Read on to see what inspired them to pick Walt Disney (DIS 1.56%), Whole Foods Market (WFM), Frontier Communications (FTR), Intel (INTC 0.05%), LinkedIn (LNKD.DL), Michael Kors (CPRI -1.72%), AMC Networks (AMCX 0.03%), and DSW (DBI -2.54%).

Dan Caplinger (Michael Kors): Trying to time purchases of falling-knife stocks can be extremely risky, and, in that light, suggesting luxury retailer Michael Kors Holdings after its 25% plunge just last week might seem foolhardy. Yet even though worries about the company's future are warranted, Kors' valuation has become quite attractive, creating at least some margin of safety even against future declines.

The challenge that Kors faces is to restart its once-formidable growth engine successfully, as sales growth has slowed considerably. Most troubling is the fact that Kors saw North American comparable-store sales actually decrease during the most recent quarter, and Kors expects that trend to continue into the current quarter as well. Even with plans to keep opening new stores, overall sales growth is likely to slow into the low to mid-teens on a percentage basis, which is a far cry from the extraordinary gains that Kors has historically posted. That's a big part of why the stock price has plunged.

All that said, though, Kors has fallen so far that its stock looks like a real bargain. Even if net income stays stagnant at current levels, paying a stock price of about 10 times earnings is far less than you'd pay for many companies with far fewer growth prospects. It'd take a true calamity for Kors to fall much further, and even though it's risky, the stock's upside potential makes it worth the risk.

Andres Cardenal (LinkedIn): LinkedIn stock is down by almost 30% from its highs of the year, mostly because the company reduced its earnings guidance for 2015 last quarter. While profit margins will probably be under pressure in the coming quarters, the long-term growth story at LinkedIn remains pretty much intact, so recent weakness in the stock seems to be providing a buying opportunity for investors.

The company is investing tons of money in areas such as human resources and R&D. The acquisition of professional video training company Lynda.com is taking its toll on profit margins, so earnings will be hard to predict in the medium term.

But the main point is that LinkedIn keeps consolidating its position as the undisputed leader in professional networking and recruiting, and management estimates that its long-term market opportunity could be in the neighborhood of $115 billion. As long as the company stays on track toward capitalizing on those massive growth opportunities, temporary weakness is a buying opportunity for investors in LinkedIn stock.

Tim Beyers (AMC Networks): Fear the Walking Dead may be the most important show in the history of AMC Networks. Why? Due to premiere this August, Fear is the signature property in a multiprogram streaming deal with Hulu and the first to be distributed internationally by AMC rather than through a partner.

Both changes have catalytic potential. Hulu's purchase is wide-ranging and includes not only Fear but also future originals screening on AMC channels such as IFC and Sundance and on network partner BBC America, in which AMC has a 49.9% joint-venture interest. (AMC also handles advertising and affiliate sales for the British broadcaster.) The resulting windfall could last several years.

Yet it's the international upside that has me most interested as an investor. Right now, AMC gets just over 2% of its cash flow from overseas sales. As the ratio gets closer to 50-50 -- and it will, because the international TV audience is far larger -- AMC should see revenue and earnings accelerate, pushing today's relatively modest 18.4 P/E ratio to new highs in the years to come.

Sean O'Reilly (DSW): While there certainly aren't a plethora of stock market bargains to be had six years into a secular bull market, for my money I'd go with DSW.

The retailer, which specializes in offering a wide range of brand-name and designer shoes for men, women, and children at discount prices, continues to execute on its strategy to expand its retail footprint.

DSW is fresh off a great quarterly report that saw comparable-store sales rise 5.1% year over year, along with a 9.4% increase in total sales and a 22.6% rise in EPS to $0.53. DSW currently operates some 449 stores in the United States and is on pace to open 35-40 stores this year. In addition, it is in the midst of an expansion into Canada via its partial ownership of Town Shoes.

That, coupled with the fact that DSW currently trades for 19 times forward earnings and sports a dividend yield of 2.2%, makes investing in DSW look quite fashionable.

Anders Bylund (Frontier): Frontier Communications shareholders are having a rough spring. Share prices have fallen by a blood-curdling 26% since the regional telecommunications firm reported disappointing first-quarter results in early May.

I don't think Frontier deserved a close shave this time.

The company has a clear vision of how to recapture the broadband customers that are fleeing to cable companies right now. A combination of strategic market acquisitions and proactive network upgrades will create selling points that Frontier simply doesn't have today.

In the meantime, Frontier stock is trading for 1.0 times trailing sales, which is between 30% and 60% below the price-to-sales valuations of major telecom rivals. Moreover, that single-quarter earnings miss came with reaffirmed full-year guidance. We're looking at a temporary speed bump, not a lasting disaster situation.

If you like to buy when there's blood in the streets, Frontier must look tasty right now. Granted, the landline telecom business is not destined for huge gains over the coming decades, but the stock is on fire sale for downright short-sighted reasons. This deal is hard to pass up, even if you don't plan to own Frontier shares for the rest of your life.

Tim Brugger (Intel): It's no secret that the advent of mobile devices has negatively affected PC sales. Naturally, Intel, with its long-held dominant position in PCs, has taken a hit. That's to be expected. However, investors should follow the lead of Intel CEO Brian Krzanich and look toward next year, not next month.

When Intel announced earnings on April 14, naysayers pointed to its flat revenues year over year, driven by the 8% drop in its Client Computing Group. Yet Intel was still able to match last year's sales, even with the significant drop in PC-related revenues. How? The company is delivering on its mission to transform itself into an Internet of Things, cloud, and mobile solutions provider.

For long-term investors, Intel's 19% jump in data center revenues in Q1 -- thanks to the cloud -- is an indication of just how far Krzanich and team have come in transitioning to new, fast-growing markets. And Intel's first-quarter data-center revenue increase comes on the heels of a 25% improvement in Q4.

Perhaps even more importantly, data center and IoT revenues combined now account for about a third of Intel's total revenues. In other words, with each successive quarter, Intel is becoming less reliant on the flailing PC market and gaining momentum in the fast-growing cloud and IoT spaces. Now toss in improved gross margins, increased operating income, and with a nearly 3% dividend yield, and Intel stock looks awfully good in June -- and beyond.

Joe Tenebruso (Whole Foods): Within Tier 1, the market-beating real-money portfolio that I manage for the Fool, I invest in the businesses best positioned to profit from undeniable long-term trends. In that way, I'm following the valuable guidance of Fool co-founder and master investor David Gardner, who once said to me, "Find out where the world is going, and get there as soon as possible."

One such trend that I find particularly interesting is the movement toward healthier eating. People are becoming more aware of what they put into their bodies, and many have shown a willingness to pay a premium for healthier foods.

The company that stands to benefit most from this trend is Whole Foods Market, a leading natural and organic foods grocer and an industry pioneer. Yet Wall Street seems to have soured on Whole Foods' stock; shares plummeted after Whole Foods' second-quarter revenue came in below analysts' expectations, and the stock has now fallen more than 25% from its 52-week high.

Therein lies our opportunity. While Wall Street is bailing out of the stock, long-term-minded investors can use the sell-off to build a partial ownership position in an outstanding business. Whole Foods, with industry-leading profit margins and returns on capital, remains best in class among grocery stores. Even better, management expects to ultimately expand to at least 1,200 stores, nearly triple its current base of 420 locations.

As such, this growth story is still in its early innings, and investors who buy shares of Whole Foods today stand to profit for many years to come.

J. Barham (Disney): Disney's shareholders have had plenty to smile about over the past decade. Shares of Disney are up over 300%, handily beating the S&P 500's run during the same time. 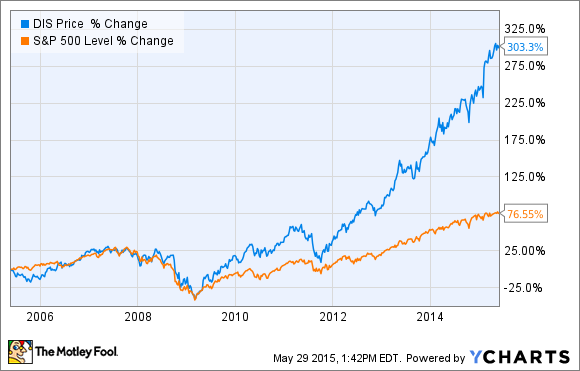 The House of Mouse has been a widely respected household name for generations, and fortunately for prospective investors, there's still opportunity to join in on the fun.

The company has diversified its intellectual properties to ensure that a bump in the road doesn't spark devastating ripple effects throughout its entire business and onto its shareholders. Since 2009, Disney has acquired Marvel, LucasFilm, and Pixar -- all shrewd investments that boast top-notch production value, beloved movie franchises, lucrative merchandise licensing rights, and devoted fan bases, including Star Wars enthusiasts.

As Disney focuses on building and refining its core segments, the company's earnings continue to impress Wall Street. Disney has beaten analysts' EPS estimates in three of the past four quarters, and the stock is up over 30% in the past year. Analysts expect the company to grow 17.4% in the next year, but given Disney's smart acquisitions, distribution capabilities, and brand strength, the company is readily positioned to remain an entertainment conglomerate and shareholder favorite for decades to come. Now looks like a good time to buy in.

3 Things to Watch in the Stock Market This Week
363%