A boom in sales of pickups and big SUVs should help boost automakers' profits -- but it'll hurt in other ways.

Cheap gas may be helping to boost sales of pickups and big SUVs like the Cadillac Escalade. How will that affect the automakers if it continues? Source: General Motors.

Unless you've been living under a rock for the last year, you know the price of gas has fallen in a big way. A year ago, the average retail price for a gallon of regular unleaded gas was $3.674, according to the U.S. Department of Energy; this week, it's $2.78.

It seems obvious that car buyers' preferences could change if gas is cheap for a long time. But how will that play out?

Sales of trucks and SUVs are up, sales of hybrids are down
It's easy to find support for the idea that car buyers' preferences are already changing, thanks to cheap gas.

Consider this: Last month was the best May ever for sales of pickup trucks in the U.S. Overall sales of pickups rose 8% in the month, according to Automotive News, from a very strong year-ago result. Meanwhile, sales of many hybrids and mass-market electric cars have dropped in recent months.

That big gain in pickups is all the more remarkable because supplies of the best-selling pickup, Ford's (NYSE: F) all-new F-150, were still tight as the Blue Oval ramped up production. If Ford dealers had had full inventories of the new F-150, May's pickup sales gains could have been even more significant.

For all three of the Detroit automakers, that should add up to a handsome boost in profits: Pickups and big SUVs are among the most profitable products in the auto business.

Many automakers are getting help from cheap gas
Detroit is not alone in seeing a boom. Sales of Toyota's (NYSE: TM) RAV4 SUV are up 24.5% through May, and its Tacoma pickup has gained 15.7%. Sales gains for Honda's (NYSE: HMC) CR-V have been modest (up 4.5% through May), but the company's big Pilot SUV has posted a 46.5% increase. Sales of BMW (NASDAQOTH: BAMXF), Audi, and Mercedes-Benz SUVs have also outpaced the market's growth.

Demand for used trucks and SUVs has also jumped. Edmunds' first-quarter report on the U.S. used-vehicle market noted that while prices were down for some of the most popular segments of used cars, buyers were not getting a break when it comes to trucks and SUVs. The average price of used trucks rose 10% year over year in the first quarter, and the average price for used large SUVs was up 8.7%.

Edmunds said in a statement accompanying the report that "Prices are elevated for these vehicles because affordable prices at the pump created a spike in demand for larger gas-guzzlers, both new and used."

If that's true, then it's likely to continue if cheap gas is really here to stay. But is it true?

If cheap gas sticks around, these trends should continue
If cheap gas prices are the new normal, then we can expect these trends to continue -- and automakers' profits to get an extended boost. But this is a big "if." Gas prices have already risen somewhat from their recent lows. 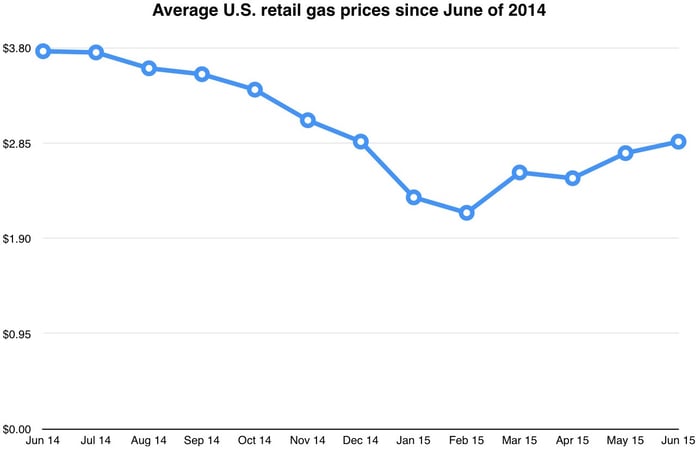 But higher gas prices might not completely disrupt the SUV boom. The market trend away from cars and toward SUVs is about more than cheap gas. The change been unfolding since well before the big drop in gas prices, and most experts attribute it to a combination of shifting consumer tastes and more appealing (and fuel-efficient) SUVs from the automakers. It's a global trend: SUV sales have been booming in markets such as China, too.

But lower gas prices certainly haven't hurt truck and SUV sales, and they might be encouraging more buyers to step up to bigger (or at least less fuel-efficient) vehicles.

The flip side is that lower gas prices already seem to be hurting sales of hybrids and electric cars. U.S. sales of Toyota's Prius hybrid family are down 15% through May, sales of Nissan's (NASDAQOTH: NSANY) battery-electric Leaf are down over 25%, and sales of the plug-in hybrid Chevy Volt are down over 36%.

Short-term drops in sales are unlikely to have much effect on automakers' long-term plans to move more of their customers to hybrids and plug-in vehicles. But if gas stays cheap for an extended period, it could make automakers less willing to invest in more-advanced hybrid and battery technology.