Lumber is a very valuable commodity. Not only is it a key building product for the housing industry, it's also used to make paper, renewable energy, and a variety of other products we use every day. As a result, nearly 40 billion board feet of lumber is need each year in the U.S. alone to meet market demand.

The best investment opportunity in lumber are the companies that directly own and manage timberland. I've already run through three best stocks to invest in lumber, which in my opinion are Plum Creek, Weyerhaeuser, and Rayonier due to the fact that these three are the largest, most diversified timberland owners in the country. Combined, these three own more than 16 million acres of timberland. That said, there are three additional interesting lumber stocks that investors should keep an eye on, which I've highlighted below.

Potlatch is the fourth largest timber REIT in the country as it owns 1.6 million acres of timberland across five states. The slide below details Potlatch's strong timber portfolio. 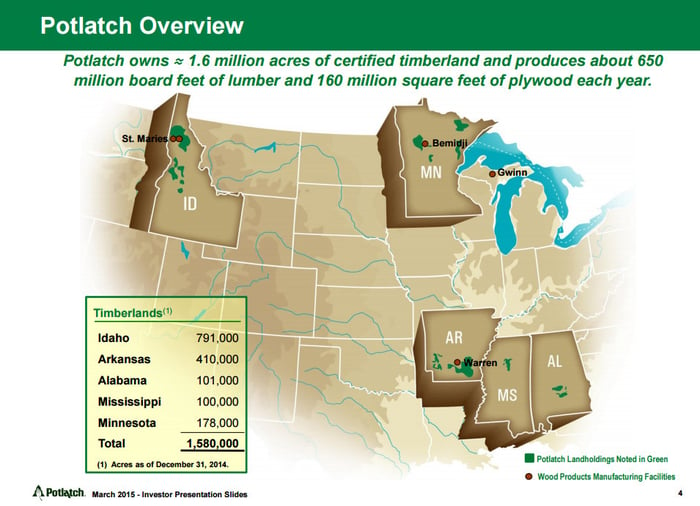 However, one thing that's worth noting is the fact that the company doesn't have much acreage in the Pacific Northwest, other than Idaho. That factor dings the company's potential a bit as timberland in Washington State and Oregon are more valuable due to the fact that the lumber can be easily exported to Asia. That factor, in addition to its smaller size, are why Potlatch isn't one of the best three lumber stocks to buy, even though its strong timber portfolio make it watch list worthy.

2. Deltic Timber (NYSE:DEL)
While most large timberland owners are organized as a REIT for tax purposes, Deltic Timber has chosen not to seek that corporation structure. As a result, the company pays a much lower dividend than its peers as its current yield is less than 1%, while most timber REITs yield closer to 4%. Further, the company is much smaller as it only owns 530,000 acres of timberland all of which are located in Arkansas and Northern Louisiana. That said, the company has a solid business with growing income and it appears to be selling at a compelling discount to the value of its land holdings. That compelling combination makes it an interesting lumber stock to watch.

3. Pope Resources (NASDAQ:POPE)
Like Deltic, Pope Resources has also chosen not to structure itself as a timber REIT. Instead, it's actually an MLP and because of that it has one of the highest yields in the lumber industry. 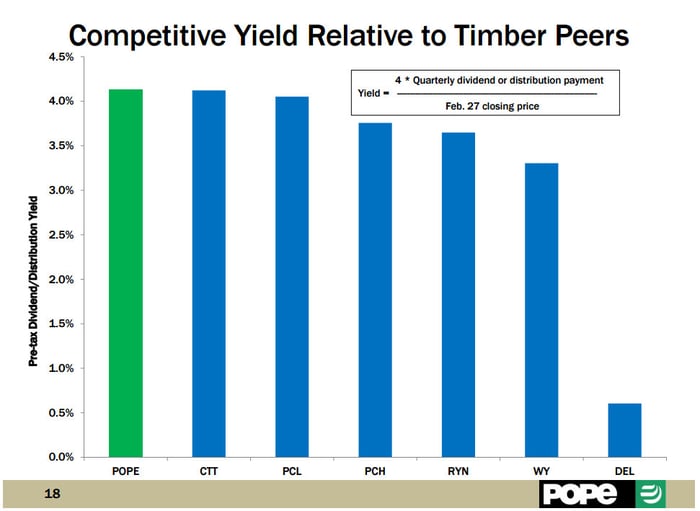 However, it's a very small company as it only owns 191,000 acres and all of its land is concentrated in the Pacific Northwest. Further, 80,000 of those acres are actually owned by private equity funds managed by Pope. That said, the Pacific Northwest is the best timber region because of its access to Asian markets so being a pure-play on that region has its advantages. Further, the company is also involved in real estate development in the Seattle area, which provides upside as the company turns its land into higher and better use developments. Still, investors looking to invest in lumber are better off with a larger, more diversified timber REIT as those are safer pure-play investments on lumber.

Investor takeaway
The lumber industry is a sleepy one for investors, however, most lumber stocks pay very generous dividends making these names great for income investors. While the three big timber REITs -- Plum Creek, Weyerhaeuser, and Rayonier -- are the best stocks to invest in due to their size and scale, Potlatch, Pope Resources, and Deltic Timber are all worth watching due to their compelling stories and value propositions.