Please ensure Javascript is enabled for purposes of website accessibility
Log In Help Join The Motley Fool
Free Article Join Over 1 Million Premium Members And Get More In-Depth Stock Guidance and Research
By Brian Feroldi - Jul 6, 2015 at 7:02AM

Celgene has grown earnings far faster than revenue over the past several years. Can they keep it up, or are margins set to peak?

Biopharmaceutical giant Celgene Corporation (CELG) has been showing investors a lot of love in recent years. Anyone who was smart enough to pick up the shares five years ago is up more than 350% on their original investment, and is absolutely crushing the market over that time period.

Celgene's stock has been such a rocket ship thanks to strong sales of the company's flagship multiple myeloma drug Revlimid, which has helped the company grow revenue at a 21% annual rate over the past five years. When combined with terrific operational excellence, earnings have been able to grow at a mouth-watering 28% rate over that same time period.

Celgene has been able to grow earnings faster than revenue through a combination of controlling costs mixed with a whole lot of share repurchase. Expenses as a percentage of sales continue to fall, which has allowed the company keep more and more profit from every additional dollar of sales. 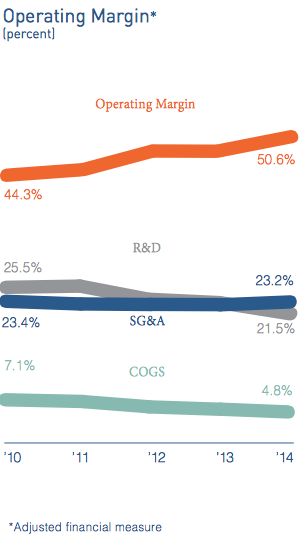 This combination of higher revenue mixed with lower costs is doing wonders for long-term shareholders. Can they use this formula to keep the good times rolling? Let's dig in.

It all starts with sales
For Celgene to keep growing their earnings so strongly over the coming years, they certainly need to add more and more revenue to the top line. More sales coming in can be spread over the same fixed costs base, which should allow the company to continue keeping more and more profit from every additional dollar of sales.

There are several ways biotech companies can continue to grow sales. They can take more market share with their currently available drugs, expand the number of diseases their drugs can treat, enter new markets, and introduce new drugs. Thankfully, Celgene is using each one of these tactics as an avenue to grow, which should give investors a lot of confidence about the future prospects.

Label expansion
When a drug is approved by a regulator such as the FDA, it is specifically approved to treat a particular type of disease. Celgene's Revlimid, for example, is currently approved to treat multiple myeloma, which is a type of blood cancer. Revlimid has been a blockbuster success for the company, as revenue hit nearly $5 billion in 2014, growing 16% over the prior year.

However, Revlimid may be useful in treating other types of cancer beyond multiple myeloma, such as non-Hodgkin's lymphoma, which is a type of cancer that originates in the lymphatic system.

In order for the company to be able to market the drug as a potential treatment for this type of cancer, it has to do a complete series of clinical trials to specifically study how Revlimid performs. If it can successfully show that Revlimid is a safe and effective drug, it could expand the number of diseases the drug can treat, which could open up future revenue streams to the company.

Take a look at the near-term potential of opportunities Celgene is currently exploring for Revlimid.

If the company can get label expansion for Revlimid in these other types of cancers, the company can use its already existing sales force, manufacturing, and reimbursement operations to sell even more Revlimid.

And label expansion isn't limited to Revlimid, either. The company is currently exploring other treatments for its many other drugs on the market, too. If Celgene can open up its current portfolio of drugs to treat different disease states, its a real win for the company, and it could drive huge value for shareholders.

Going global
Another growth avenue to consider is geographic expansion for the company's drugs. It's important to keep in mind that the U.S., European Union, Japan, and other countries all have different approval processes and requirements before a drug can be marketed and sold in that country. It can take a long time for a drug to be rolled out around the world, and as new markets come online, sales continue to grow.

Just because a drug is approved in one market doesn't mean it will automatically be approved in another, but it can certainly put the odds in the company's favor. This can be yet another way for a company to grow its revenue from its existing portfolio of drugs and predict results with a heightened degree of confidence. 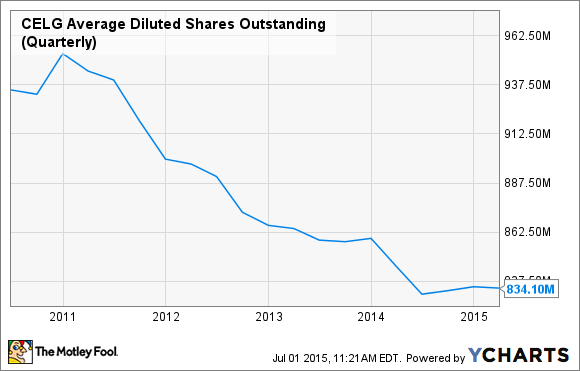 The company just recently authorized a new $4 billion share repurchase program, which, when combined with previous authorizations, gives the company the ability to repurchase up to $5.2 billion of its stock. With a current market cap of around $93 billion, that could lead to a 5% further reduction in the shares outstanding.

Is Celgene a buy?
Looking ahead, Celgene's management team expects the good times to continue. Through a combination of new product introductions, label expansion, and the continued sales of existing products, management is guiding for an 18% annual growth rate between now and 2020. Better still, the company believes the business should continue to scale nicely, and through the initiatives mentioned above, it currently expects earnings to grow around 23% per year. If the company can pull that off, revenue would be north of $20 billion, and earnings would grow to around $12.50 per share by 2020.

Considering the near- and long-term growth prospects for the company, I don't think the stock is overvalued right now. Celgene is on my short list of future investment candidates, and you may want to put it on your radar as well.

Brian Feroldi has no position in any stocks mentioned. The Motley Fool recommends Celgene. Try any of our Foolish newsletter services free for 30 days. We Fools may not all hold the same opinions, but we all believe that considering a diverse range of insights makes us better investors. The Motley Fool has a disclosure policy.