Uncle Sam just hit General Electric Company (NYSE:GE) with a $3.3 billion regulatory roadblock. With a deal frozen in place and no simple solution in sight, here's what you need to know.

Freezing out Frigidaire
The Department of Justice slammed the kitchen door on Electrolux's acquisition aspirations earlier this month when it filed a civil antitrust lawsuit to block the company's purchase of General Electric's appliance business. Valued at $3.3 billion, the deal would've boosted the Sweden-based corporation's U.S. market share by volume from less than 10% to around 26.5%, according to The Wall Street Journal. That would've pushed it beyond current market-share champion Whirlpool Corp., which lays claim to 25.6% of America's appliances.

Electrolux's proposed acquisition of General Electric's appliance business would leave millions of Americans vulnerable to price increases for ranges, cooktops and wall ovens, products that serve an important role in family life and represent large purchases for many households. This lawsuit also seeks to prevent a duopoly in the sale of these major cooking appliances to builders and other commercial purchasers, who often pass on price increases to home buyers or renters.

Accelerating antitrust
The Justice Department's denial came as a surprise to many investors. For General Electric shareholders, this latest news represents a kink in the carefully laid plans of CEO Jeff Immelt, who has been working hard to streamline his company's portfolio into industry and away from finance, refrigerators, and any other non-core assets. In April, Immelt announced that General Electric would sell off its GE Capital business segment, returning an estimated $90 billion to shareholders by 2018. That announcement shot GE shares up 15%, but the excitement seems to have worn off. Over the past few months, its stock has lagged the S&P 500. 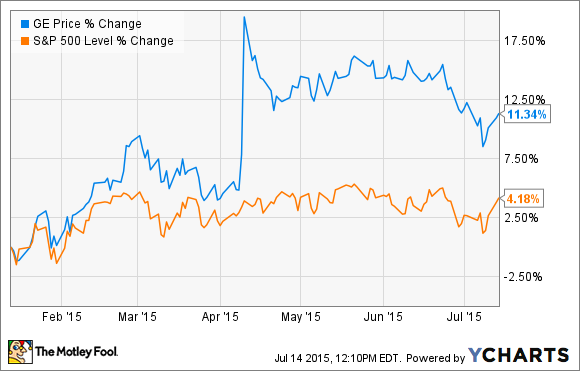 General Electric's restructuring has caught more than America's eye. Earlier this year, the European Union Commission issued a list of concerns over GE's attempted $13.5 billion purchase of France-based Alstom's energy business. The E.U. Commission noted that this acquisition would leave General Electric and Siemens as the only two strong energy competitors in the Union.

It ain't over yet
For shareholders, this latest roadblock in General Electric's progressive strategy is an important reminder that regulators still have a role. The antitrust movement has been heating up, with special attention being paid to megacorporation pairings like Comcast Corporation and Time Warner Cable or American Airlines and US Airways.

If you're a megacorporation shareholder, always keep in mind that regulators have the last word. Day traders may be quick to buy or sell based on a company announcement alone, but longer-term investors know that things don't always work out the way a company wants. For now, GE is stuck with everything but the kitchen sink. But as any competent corporation would, it continues to innovate and expand its appliance business even in the midst of selling it off. Only when it finds the right opportunity -- and the right regulatory approval -- will General Electric make strategic moves to create value for its steadfast shareholders.