Please ensure Javascript is enabled for purposes of website accessibility
Log In Help Join The Motley Fool
Free Article Join Over 1 Million Premium Members And Get More In-Depth Stock Guidance and Research
By George Budwell - Jul 25, 2015 at 7:07AM

Warren Buffett's Berkshire Hathaway has rarely been beaten by any fund for lengthy periods of time. But this ETF is doing it in spades. Here's how.

Berkshire Hathaway (BRK.A 0.55%) (BRK.B 0.42%) is a legendary holding company among investors due to its 50-year history of averaging a staggering 19% annual return. To put this amazing feat into context, Berkshire's average annual performance has more than doubled the S&P 500's rate of return during the same time period, even after including dividends: 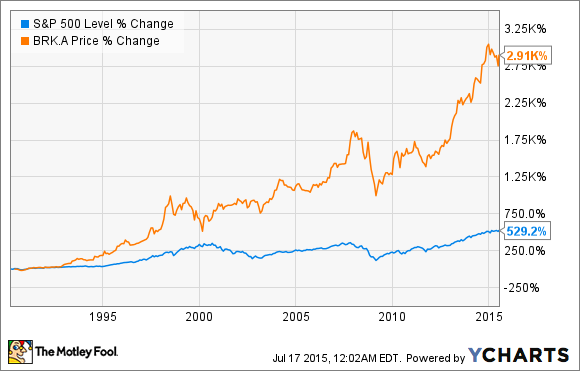 As most investors are fully aware, Berkshire is headed up by superinvestor extraordinaire Warren Buffett, who's well-known for espousing the strategy of buying stocks linked to established companies with a track record of increasing cash flows and possessing a strong competitive moat in the marketplace -- and then letting time do the heavy lifting in terms of generating marketing-crushing returns.

This ETF has been trouncing even Buffett
As Buffett and his partner Charlie Munger have noted multiple times in their annual letter to shareholders, Berkshire won't always beat the broader markets since their real goal is to not lose money in the event of a market downturn. So, when the market is soaring as it did in 2013, for instance, Berkshire's conservative approach to capital management may look somewhat less impressive: 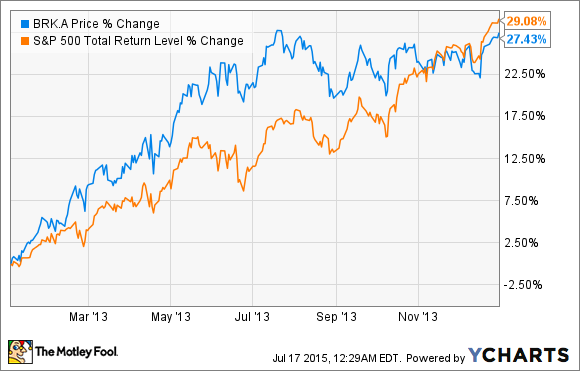 But the fact of the matter is that Buffett, and his holding company, have rarely failed to beat the broader markets in any given year -- irrespective of market conditions. And the disparity between Berkshire's performance and the broader markets tends to become rather pronounced as you zoom out time-wise.

That's why it's rather stunning to see that the iShares Nasdaq Biotechnology Index (IBB 1.74%) has been absolutely crushing Berkshire for the last five years running: 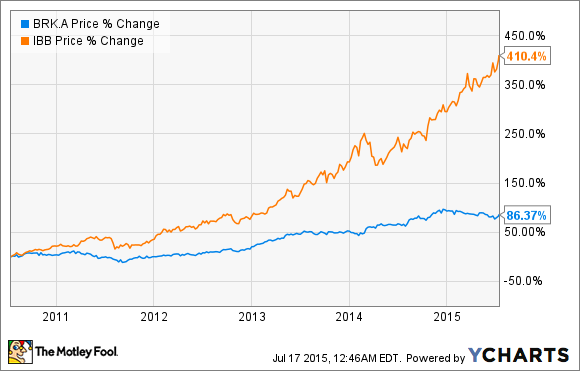 Although the last five years have basically been a raging bull market where growth stocks are expected to outperform more conservative investing vehicles like Berkshire, there is good reason to believe this trend will continue for the foreseeable future, regardless of how the broader markets perform.

Biotech's rise has been fueled by an innovation boom
While some may be quick to call this hyperperformance a bubble akin to the tech bubble that arose at the end of the 1990s, the simple truth is this golden era of biotech has long been in the making. After decades of research, the biotech industry began to really break through in late 2010 on a number of important fronts, such as direct-acting anti-virals, cancer immunotherapies, and next-generation vaccines -- just to name a few.

The net result has been a massive rise in revenues and earnings among companies like Celgene (CELG) and Gilead Sciences (GILD 5.16%) -- the top two holdings of the iShares Nasdaq Biotech Index.

Celgene's adjusted earnings per share and total annual revenues, for example, have been growing by 20%, on average, since 2010, which is the direct result of the biotech garnering several new indications for its top cancer drug Revlimid. Following its recent acquisition of the immune disorder specialist Receptos for its experimental relapsing multiple sclerosis drug, ozanimod, Celgene is now on track to generate annual sales of $21 billion by 2020 -- a projected annual growth rate of 21% over the next five years.

In a similar manner, Gilead's earnings and revenues have been soaring due to the launch of its monstrous hepatitis C franchise composed of Sovaldi and Harvoni. Specifically, Gilead's total revenues rose 122% year over year in 2014 to a mind-blowing $25 billion. This dramatic rise in free cash has allowed the biotech to up its share buyback efforts in a big way and begin offering a dividend to investors. More importantly, though, Gilead now has a mountain of cash that can be used to create further value for shareholders via a mid- to large-sized acquisition.

Looking ahead, investors can rest assured that this trend is likely to continue for the foreseeable future. After all, we are only now scratching the surface on these potent new classes of medicines that have the potential to revolutionize how patients are treated for numerous maladies such as cancer, cardiovascular disease, diabetes, and even HIV.

Tying it all together
Warren Buffett's strategy of buying and holding top names across a wide diversity of industries has paid off handsomely, and will probably continue to do so moving forward. That said, it will also probably lag behind the emerging biotech industry for the remainder of the decade in light of the fact that many biotechs are just now beginning to bring their game-changing products to market, and the industry is rife with capital at the moment, meaning that I think the M&A bonanza is unlikely to abate anytime soon. Put simply, investors may want to consider adding a biotech ETF like the iShares Nasdaq Biotech Index to their portfolios, especially since the industry appears to have many years of double-digit growth ahead of it.