Heads up, Ford (NYSE:F) fans! The Blue Oval will report its second-quarter earnings bright and early on Tuesday morning.

What analysts are saying:

Ford CEO Mark Fields and his team have been consistent in their guidance: They expect Ford's full-year pre-tax profit to land between $8.5 billion and $9.5 billion, a big improvement from last year's $6.3 billion result. Fields also expects higher revenue, operating margin, and operating-related cash flow in 2015 versus 2014.

But -- and this is a big "but" -- they have warned us that the majority of that big profit will come in the second half of the year. Here's the chart they've used to show the pattern: 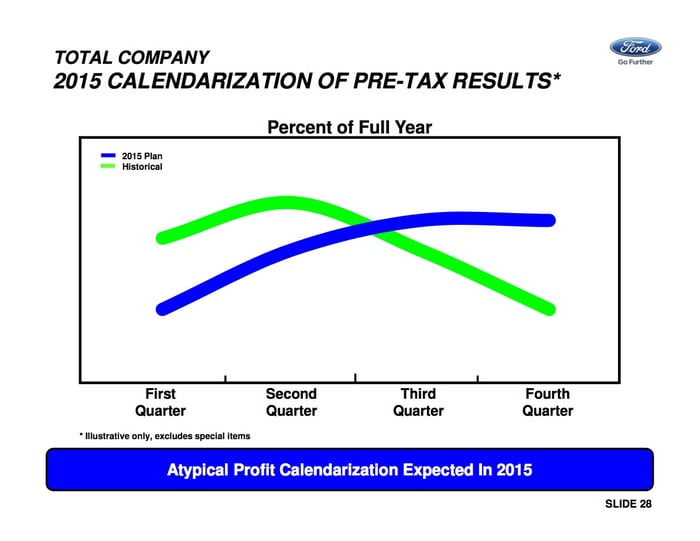 That's unusual. Typically, Ford earns less in the second half, because that's when it launches new models. Those models start to pay off after a few months on the market, driving profits up in the first part of the following year.  But things are different this year, because of the huge costs of launching the all-new version of Ford's most profitable product, the F-150 pickup.

The F-150 might well continue to be a drag on second-quarter results, as rival General Motors (NYSE:GM) was able to make big market-share gains in pickups at Ford's expense in the quarter. But some of Ford's work elsewhere may have begun to boost the bottom line. CFO Bob Shanks said last quarter that he expected Ford's European turnaround efforts to begin bearing fruit "later in 2015." Europe may already be looking up: Costs are down, and sales in June were very strong.

European sales of the all-new Ford Mondeo, a twin to the U.S.-market Fusion, were very strong in the second quarter. Source: Ford Motor Company.

Ford's long-running investment cycle in Asia may be about to pay off as well, although the recent slowdown in China is cause for concern. General Motors managed to boost its second-quarter earnings in China through a combination of cost cuts and high-margin new products, but Ford may not have been able to follow the same game plan.

Since taking over as CEO last year, Fields has moved to accelerate the plans set in motion by his highly regarded predecessor, Alan Mulally. Fields has looked like a strong choice in his first year, putting his own stamp on the company with an aggressive push to embrace advanced technology and alternative ideas of "mobility" -- while staying focused on delivering top-notch products to customers today.

Fields has also forced Ford to buckle down on quality. The Blue Oval had lost ground in quality assessments over the last few years in part because of issues with newly launched products. Ford responded by overhauling its launch procedures, and apparently the revamp was a good one: The launch of the new F-150 has been almost glitch-free so far.

In the near term, Fields has Ford on course to reap the benefits of several years of investments. Looking out further, Ford is increasingly well positioned with emerging technologies like autonomous driving and electrified propulsion.

What this Fool says:

Ford is still a work in progress. It's still restructuring in Europe, still investing in expansion in Asia, and still getting all those new F-150s to its dealers here at home.

We've been talking about all of those efforts for a few years now. Soon, over the next few quarters, all of them should start contributing to Ford's bottom line. But I think Ford's second-quarter earnings will be held back a bit by the still-ramping F-150 and possibly by the slowdown in China's new-car market.

My guess: Ford will beat Wall Street's estimate, but not by much. And unless China proves to be more of a problem for Ford than it was for General Motors, its guidance for the second half of 2015 will continue to be upbeat. We'll find out Tuesday.