High-quality dividend stocks are arguably the most effective investing vehicle for accumulating wealth over long time periods. Furthermore, as a group, they exhibit lower volatility than the broad market, which means they inflict a lower emotional toll on their shareholders. Have I got your attention? Then here are three of our analysts' favorite dividend stocks:

Alex Dumortier (Mead Johnson): At 1.80%, the dividend yield of Mead Johnson Nutrition Co (MJN) is lower than that of the S&P 500, so if an above-market yield is an absolute requirement, this isn't the stock for you. However, I think excluding it on that basis would be a costly mistake, because I think shares of Mead Johnson will soon overtake the market on that measure and go on to build a long record of dividend increases (think decades).

I'm confident in that statement (as much as one can be, when it comes to investing) because this leader in infant and child nutrition possesses the single most important attribute for a business, and one that few companies boast: a sustainable competitive advantage. That economic moat is rooted in clinical claims of efficacy and quality, its brand, and its distribution network.

As a result, Mead Johnson's operating profit margins are twice that of the S&P 500 Consumer Staples sector, and its return on capital is roughly three times higher, according to data from Bloomberg. Make no mistake about it, this is exactly the type of franchise that Warren Buffett likes to add to Berkshire Hathaway (BRK.B -1.29%).

As far as today's dividend yield goes, don't be too concerned -- over the five-year period through 2014, Mead Johnson increased its dividend at an annualized rate of 16.5% compared to 12% for the S&P 500 as a whole. And with a dividend payout ratio of 42% last year, it has room to run beyond earnings growth. 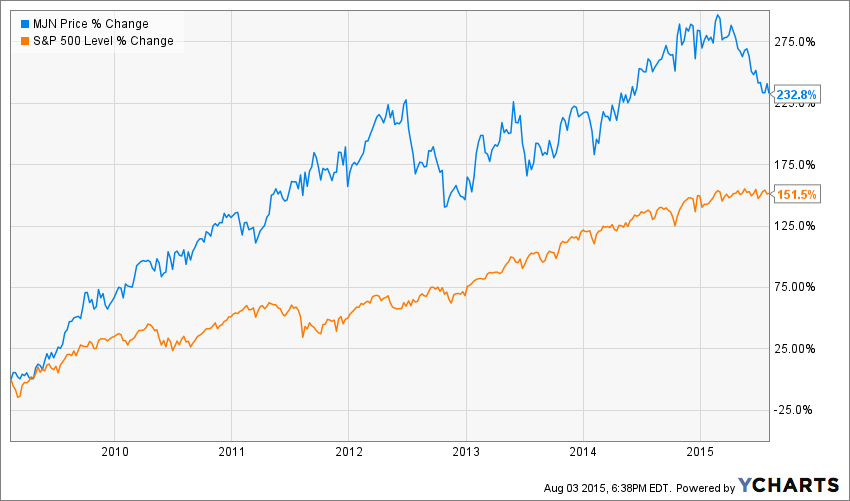 Keep in mind, however, that shares of Mead Johnson look fully valued at this time.

Dan Caplinger (Altria): Tobacco giant Altria Group (MO -0.50%) is a controversial pick among many investors, with the idea of profiting from cigarette sales running afoul of some tenets of socially responsible investing. Yet if those concerns don't worry you, it's hard to find a better track record of long-term success than Altria's, and its current dividend yield of nearly 4% is still among the best payouts for megacap stocks.

Altria has done a great job over the years of resiliently defending its business, fending off legal battles and finding ways to increase profits despite long-term trends away from smoking. The strength of the Marlboro brand has allowed Altria to raise prices to make up for reduced volumes in lean years, but recently, Altria has seen a slight uptick in cigarette volumes, as lower gasoline prices have left smokers with more disposable income.

Clearly, Altria isn't a risk-free stock pick. Regulators still look for ways to control the company's promotional activities, and even though regulatory efforts to impose plain-packaging restrictions and other limitations have thus far failed, the tobacco giant still has to stay vigilant for further attacks. Nevertheless, given its ability to survive and thrive thus far, Altria's track record of dependable income and strong total returns makes it a natural investment to love.

Brian Stoffel (Apple): I won't judge if you scoff at Apple's (AAPL 0.23%) 1.7% dividend yield. Compared to the S&P 500's current yield of about 2%, it looks puny. But there's a lot more strength in the company's payout than meets the eye.

First, Apple's dividend is exceedingly safe. Over the past twelve months, the company has brought in almost $70 billion in free cash flow. Of that, it has only had to use a little over $11 billion to pay its dividend. In other words, even if Apple hits hard times, it should have no problem continuing its payout.

If the company doesn't hit hard times, investors should expect the dividend to grow. Under Tim Cook's leadership, Apple has increased its payout by an average of 11% per year. Given that the dividend still only takes up 16% of free cash flow, investors can expect that trend to continue -- or accelerate -- moving forward.

Finally, Apple is having an easier time meeting its payout obligations thanks to share repurchases. Between September 2012 and today, the number of Apple shares outstanding has shrunk 14%. That means your ownership has increased 16%.

While the company did have to make one-time payments to make this happen, it can continue making dividend payments in perpetuity and use less money to do so. Pin these three traits on to the most valuable company -- with the most valuable brand -- in the world, and you have a long-term dividend-paying winner.