Investors in Safety Insurance Group (NASDAQ:SAFT) who expected a reprieve from the winter snowstorms may want to think again. The company reported losses for the second quarter of 2015, as its results were negatively affected by another $45 million in catastrophe loss and loss-adjustment expenses related to the more than 9 feet of snow that blanketed its core Massachusetts markets in the first quarter of 2015.

Charting Safety's performance
Safety Insurance has a record as an above-average underwriter, generating consistent underwriting profits in an industry where very few can make that claim. But the one-off snowstorms of early 2015 are proving to be costly.

Note in the following chart the increase in Safety's combined ratio compared with prior periods. Losses and expenses consumed 109.2% of premiums in the second quarter, down from 142.6% of premiums in the first quarter, but losses are still well above its historical average. 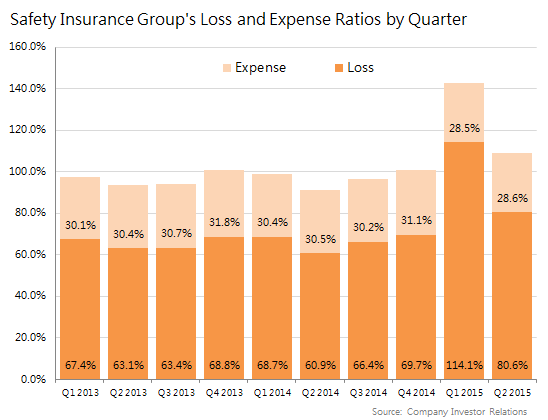 When Safety Insurance reported its first-quarter 2015 results, it was quick to note that it was the first time in its history that its losses pierced through its reinsurance program. The company has now recorded $156.7 million in direct catastrophe losses and expects to receive $65 million in reinsurance recoveries. That's up from $111.7 in catastrophe losses and $49.9 million in recoveries expected in the first quarter.

Though losses have proved challenging, the company may have renewed pricing power going forward. The company reported that its average written premium per exposure jumped 5.1% and 1.7% for its commercial automobile and homeowners lines of business, respectively, during the first half of 2015. It's also underwriting more risks, with written exposures growing more than 4% in both commercial automobile and homeowners lines.

Its investment portfolio remains in position to capitalize on any interest rate increases. This quarter, Safety Insurance reported that its investments generated $10.3 million in net investment income, with a duration of only four years and an average yield of 3.4%.

Keep in mind that Boston hit a new record snowfall for a single season on March 15, just 16 days before the end of the fiscal 2015 quarter. With three additional months to tally the damage in the second quarter, one would expect that Safety Insurance, normally conservative with its assumptions, now has a firm grasp on its total losses. Let's hope warmer weather can help thaw out its cold first-half results.