In a stock market that looks expensive, large-capitalization bank shares appear to be an oasis of value (though not screaming bargains, mind you). Still, not all shares are equally attractive within that segment. We asked our analysts for their pick of big banks with the best chances to outperform in 2016. Here are three:

Alex Dumortier: Purely in terms of quality of the franchise (management, lending culture, cost discipline, etc), there are better big banks out there than Bank of America (NYSE:BAC) -- my Foolish colleague John Maxfield will pitch you one such institution below.

However, when you assess the quality of franchise against the price at which you can own the shares, B of A looks to me like the big bank that is most likely to outperform in 2016 (assuming the shares don't run up wildly this year, naturally). Indeed, B of A's shares can be yours for less than 11 times next year's consensus earnings-per-share estimate; compare that to Wells Fargo, which is trading at nearly 13 times.

There are several reasons to think the market will be willing to assign those shares a higher multiple next year, including the end of multi-billion dollar fines/settlements related to illegal or abusive practices prior to the credit crisis (and, in some cases, during and after the crisis). Shareholders will be keeping their fingers crossed: this has been a very long time coming.

I also expect the Federal Reserve to allow B of A to raise its dividend to a more normal level -- the current dividend yield is only about half that of the S&P 500 -- which will attract a new constituency of investor to the stock. That's a legitimate catalyst for a higher valuation.

What about beyond 2016? I think investors can be comfortable owning B of A over the long term as a core position. As Warren Buffett wrote in his 2014 Berkshire Hathaway shareholder letter: "Bank of America is, in effect, our fourth largest equity position -- and one we value highly."

Matt Frankel: I think Citigroup (NYSE:C) has a solid chance of outperforming the banking sector in 2016.

Citigroup has done an excellent job of winding down its unwanted assets, getting rid of underperforming businesses, and improving its fundamentals over the past several years. It is also doing a good job of trimming expenses, with lower spending on advertising and compensation.

However, due to the risks involved, as well as the bank's history of mismanagement, shares trade at a rather cheap valuation of just 86% of its book value, which, despite the bank's unquestionable improvements, hasn't changed much in the past couple of years. This could be due to several reasons, such as inconsistent profitability, worries over additional legal expenses, or just a general poor perception of the bank among investors. Whether it's warranted or not, the fact is that Citigroup is cheap. 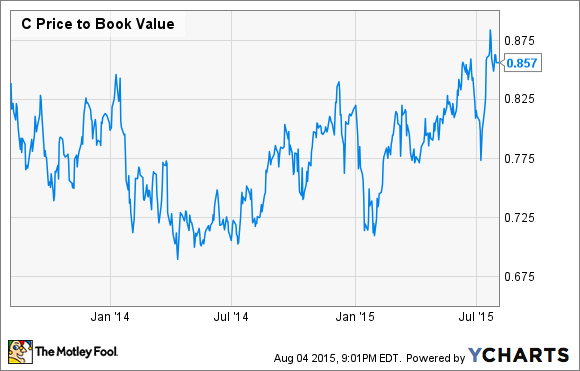 Now, this doesn't mean that I think Citigroup is the best bank stock to buy. There are plenty of obstacles standing in its way. For example, Citigroup has relatively high exposure to emerging and other international markets, which adds an ongoing risk. And, while the unwanted Citi Holdings assets have shrunk considerably, $116 billion in risky and undesirable assets is still a large amount.

However, if Citigroup keeps improving its balance sheet, managing expenses, and starts to consistently deliver profitability, there is a real chance the bank could outperform its peers in 2016.

John Maxfield: Like Alex, I also believe that Bank of America has the best chance to outperform the industry next year. That being said, I don't believe it's the only one.

It's my opinion that you can never count out Wells Fargo (NYSE:WFC) when talking about performance. I say that because it is perennially the best run too-big-to-fail bank in the country -- and perhaps in the world, when you consider that its current market capitalization exceeds that of all other banks around the globe despite being a fraction the size of multiple Chinese, European, and even other American financial institutions.

Wells Fargo's success is grounded in two things. First, its ability to keep expenses low relative to revenue, as measured by the so-called efficiency ratio. In the latest quarter, only 58.5% of its net revenue was consumed by operating expenses. The same figure for most other banks is well over 60%. Second, its prudence when it comes to credit risk has allowed it to write off fewer bad loans than its competitors time and again in past credit cycles.

Even if I'm wrong about Wells Fargo's ability to outperform the bank industry or the broader market in 2016 -- which, let's be honest, is completely impossible to predict with anything even remotely resembling precision -- it's still a great stock to anchor an investor's portfolio.