2015 was supposed to be the year of the yieldco. The financing vehicle had become a popular tool for renewable energy companies in 2014 and with low interest rates persisting these companies were seen as a way to give investors exposure to renewable energy and provide strong dividend yields at the same time.

But this year has seen yieldco stocks plummet, resulting in yields that have exceeded 5%, more than double the rate of treasuries. NRG Yield (NYSE:CWEN), TerraFrom Power (NASDAQ:TERP), Abengoa Yield (NASDAQ:AY), and the recently IPOed 8point3 Energy Partners (NASDAQ:CAFD) have all plunged in recent months. Understanding why these stocks are down and how it impacts these businesses could tell you if buying now is a good option or if it's "hands off" for the time being. 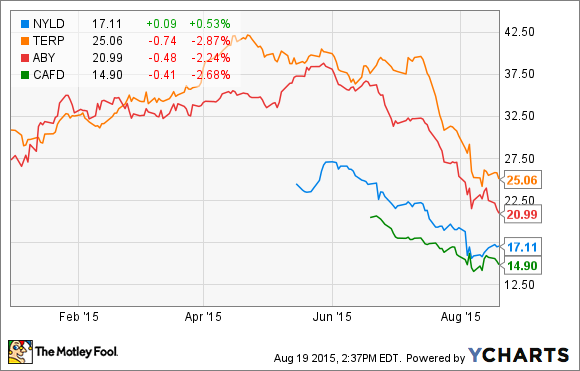 Low fossil fuel prices
Like it or not, oil prices still dominate the day to day trading of renewable energy stocks. Logically, it doesn't make sense and makes even less sense for companies like yieldcos who have stable long-term cash flows, but this is the stock market we're talking about and logic doesn't rule the land.

Low prices for fossil fuels like natural gas and oil aren't direct competitors but they've clearly caused jitters in the yieldco space. For now, that's bad news for yieldcos and while they aren't a true threat long-term, higher interest rates are.

Interest rates are a big deal to yieldcos
If there's one thing that could sink the renewable energy industry quickly it's rising interest rates. Renewable energy is cheap today in part because the predictable cash flows projects generate over 20 or more years can be discounted at a low rate to get a relatively high project value. If rates rise, the value of renewable energy projects goes down and they can go down quickly.

You can think of pricing renewable energy projects like a mortgage you might take out on a new home. If you have a $1,000 budget and interest rates are 4% you can afford a $209,500 mortgage. If rates suddenly rise to 6% you can only afford a $166,750 mortgage despite the same monthly payment. Analogous situation happens with renewable energy projects and if interest rates rise the price investors will pay for these assets can drop quickly.

What this all means to yieldcos
Where yieldcos get complicated is in their hopes to grow long-term. Most yieldcos don't plan to grow like a typical stock, plowing earnings back into the business to grow future earnings. Most yieldcos plan to pay out 80%-85% of cash flow to investors in the form of a dividend and keep a small amount for future growth.

The working assumption is that they'll be able to float more debt and more equity to buy projects and increase the dividend. This works if the cost of interest payments and equity are lower than the cost to buy new projects. So, for example if you have a cost of debt of 6% and a cost of equity of 9% and use a 50/50 mix to buy projects, then as long as the projects you buy have a higher IRR than 7.5% you can issue debt and equity and grow almost at will and still have extra cash to raise the dividend.

But problems start to arise when the cost of capital rises. If your cost of capital is higher than the IRR of projects then it would actually lower cash available to be paid in dividends if a yieldco expanded, reducing the ability to grow. If you can't grow the dividend then investors will command a higher dividend, creating a vicious cycle of declining stock prices.

It may sound weird but high stock prices are actually essential to the yieldco investment thesis. If stock prices fall too far companies won't have the ability to issue equity to expand and grow dividends in the future. That's why the recent drop in stocks is such a big deal.

What to think long-term
From an investment perspective, the drop in yieldcos isn't bad for the yieldcos themselves and can actually give prospective investors with better dividend yields short-term. But it could have a negative impact on dividend growth and will likely be a big negative to yieldco sponsors. These sponsors are hoping for high project purchase prices when they push assets down to the yieldco, assisted by a yieldco's low cost of capital, as well as growing incentive distribution rights if the dividend rises. Low stock prices hurt both.

The view you take on yieldcos today should depend a lot on how the yieldco is structured. For example, TerraForm Power is highly leveraged and SunEdison essentially has to force projects down to it to remain solvent. There's a lot of risk that projects will have to be acquired at unfavorable terms, which could hurt both companies if TerraForm ends up issuing equity and buying projects at a lower IRR than total capital costs.

8point3 Energy Partners is a partnership between SunPower and First Solar and it's going to use less leverage and has lower growth goals than TerraForm Power. That can be a detriment in good times, but the company also doesn't have to issue new shares to buy projects in the next year if it doesn't want to.

NRG Yield actually owns some fossil fuel assets and has the ability to buy projects at market prices, which means it isn't as beholden to the interests of its sponsor as typical renewable developer sponsors. If this allows the company to buy projects at attractive prices in the future this could be an advantage.

Knowing how yieldcos are built and why stock prices matter is important for investors and it may explain why solar stocks are having a tough year. For the industry's sake, I hope the slump doesn't last long or there will be a lot of turmoil in renewable energy.