Investors are starting to see exactly what kind of business SunEdison (OTC:SUNEQ) has been building with its acquisition spree over the past year, and it may not be what they had expected. Essentially, the company has added the capabilities needed to build a next-generation renewable energy business. Unfortunately, it doesn't have the balance sheet to build projects and it will have to find very creative ways to fund its growth.

Two moves made Monday after the market closed highlight the challenge SunEdison will have turning its massive pipeline into profitable projects long term.

More debt and less potential for investors
Acquiring assets like First Wind, Solar Grid Storage, and Vivint Solar on top of a growing asset base has made SunEdison a high-growth company in renewable energy, but it's also taken its toll on SunEdison's balance sheet. On June 31, 2014, the company had $5.4 billion in total debt outstanding and a year later that number has ballooned to $10.7 billion.

While debt has grown because of numerous acquisitions the company has increased installation guidance as well to 2.1-2.3 GW in 2015 and all the way to 4.2-4.5 GW in 2016. What's crazy is that buying companies has really just given SunEdison the right to spend more money on projects in the future.

Funding that growth will take billions more in capital, which is why you see all of the warehouse facilities, term debt, and even the recent $650 million preferred stock offering. This cash is needed to build projects and SunEdison simply doesn't have the cash to build them without this outside funding.

Warehouse facilities pose a huge risk for SunEdison
On last quarter's conference call, management touted $2 billion in "warehouse" financing that SunEdison had lined up. Yesterday, that group of warehouse vehicles grew $1 billion, with an option to add an additional $1 billion, due to a financing vehicle with a funding round by Goldman Sachs (NYSE:GS).

As SunEdison puts it, these warehouses are a ring-fenced entity that provide construction financing for projects with the intention to eventually sell them to TerraForm Power (NASDAQ:TERP) later on. 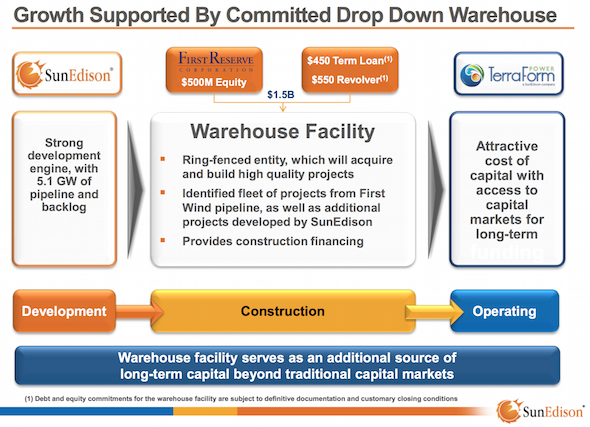 These are great ways to fund projects short term, but they come with relatively high costs including variable debt costs of 6.25% and 5.75% for Warehouse 1.0 and TerraForm Private warehouses, respectively. And those rates are tied to LIBOR, so if rates go up, so do costs for the warehouses. This cost of debt is on top of the equity Goldman Sachs, First Reserve, and others have put into the warehouses.

The entire warehouse concept is predicated on the assumption that TerraForm Power, SunEdison's yieldco, will be able to buy these projects eventually. But the cost of capital at TerraFrom may not be low enough to justify buying these projects, which could be detrimental to TerraForm and SunEdison long term.

The yieldco narrative falls apart
When yieldcos were formed, the thesis was that they would have low costs of capital and could therefore pay higher prices for projects than the developer (in this case SunEdison) holding onto them. That thesis works if stock prices are high and dividend yields are low, but if the opposite is true, then the thesis starts to fall apart. As you can see below, TerraForm Power's stock has plunged recently and the current implied the dividend yield is 5.3%. 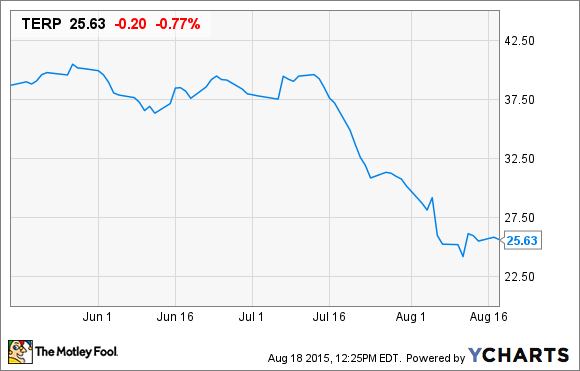 This becomes a problem when TerraForm Power wants to buy projects from SunEdison or a warehouse facility. TerraFrom Power only had $390.6 million in cash on the balance sheet at the end of the second quarter, so it can't exactly go out and buy $3-$4 billion of solar and wind projects whenever it wants.

The plan for yieldcos is to buy projects at a higher return than the combination of new debt and new equity costs for the yieldco. For TerraForm, Its debt averaged a 6% yield at the end of last quarter, although some of that was variable, meaning rates could rise or fall in the future.

It's a little more complicated to calculate a cost of capital for a stock, but the easiest way is to take the dividend yield times the targeted payout ratio of 85% (5.7%/85%). That would imply a minimum cost of capital of 6.7%.

By this logic, a project acquired by TerraForm Power for 50/50 debt and equity would then have to have an internal rate of return of over 6.35% to be economical. Remember, this is internal rate of return, not the advertised cash on cash return, which doesn't account for the limited life span of renewable energy assets.

It's also key to understand that this assumes that TerraForm Power can issue debt and equity, in the form of new shares, whenever it wants to buy projects. That may not be true today.

If the IRR of projects is high enough to justify new debt and equity, any cash generated on top of the cost of debt and dividends from newly issued shares gets added to the dividend and eventually incentive distribution rights, or IDRs, that disproportionately help SunEdison.

The house of cards starts to crumble
If SunEdison can keep the stock price of TerraForm Power high and the implied dividend low, it lowers the effective cost of capital for the yieldco to buy operating projects. If those projects are acquired at low rates, it essentially means SunEdison could put an unlimited pile of projects into the yieldco and each project would add a little bit to the dividend payout and eventually IDRs.

But problems start to arise if debt or equity costs rise, and if both go up, it's detrimental for SunEdison because it could have projects stuck in high-cost warehouses or without funding to be built at the parent level. That's why announcements like "Green Bonds" with an interest rate of 9.75% or Perpetual Convertible Preferred Stock with a 6.75% rate or even TerraForm and SunEdison's falling stock prices have to be a concern for investors.

SunEdison has been buying projects with relatively low IRRs in the range of 6%-8%, and its cost of capital looks like it's starting to rise above that. If these fundamental costs go up just as SunEdison starts to accelerate growth it could create a funding death spiral for both the yieldco and SunEdison itself.

It's hard to see how the SunEdison story will hold up to the test of time. The company is in an endless race to fund new projects and with $10.7 billion in debt and continuing losses I don't see how it will win long-term. Unless SunEdison and TerraForm can find new sources of cheap funding, investors are going to be disappointed with the performance of this renewable energy giant.