Ford discontinued the midsize Ranger pickup in the U.S. in 2011, but it still sells this version overseas. Ford is reportedly considering a new Ranger that would be built in the U.S. Source: Ford Motor Company.

The Detroit News broke the story bright and early on Wednesday morning, and for Ford (NYSE:F) fans, it was a biggie: Ford and the United Auto Workers are said to be discussing the possibility of building a new version of the Ranger midsize pickup at a factory near Detroit starting in a few years. The factory in question, Ford's Michigan Assembly Plant, currently makes the compact Ford Focus and C-Max. But Ford has said that production of those vehicles will move elsewhere -- likely to Mexico -- after 2018.

That has led to the obvious question: What is Ford planning to do with that factory? It's a question that Ford pointedly left unanswered as negotiations with the UAW began last month.

If the answer is "build a new Ranger pickup," it makes a lot of sense. In fact, it makes so much sense that I'm convinced that these reports are true. Here are three reasons why.

Reason one: The Ranger will be more profitable than a Focus
For political reasons, Ford is very unlikely to close any U.S. plants while the economy remains strong. The hint that it might close Michigan Assembly after the Focus departs was almost certainly made to give the UAW something to think about during contract negotiations.

But it makes sense that Ford would want to use its existing U.S. factories -- which have higher costs than plants in Mexico or Asia -- to build its most profitable products. Simply put, a new Ranger that follows the path laid out by General Motors' (NYSE:GM) new midsize trucks would almost certainly be a much more profitable product than the Focus.

The Focus is a good product, and Ford makes money on it. But a look at the new GM midsize pickups, the Chevy Colorado and GMC Canyon, suggest that Ford could make quite a bit more money on a similar Ranger. The Colorado and Canyon aren't marketed as bare-bones work trucks; they're positioned as "lifestyle" vehicles for individuals, and offered with plush interiors and other profit-boosting features.

A new Ranger wouldn't be able to match the high average transaction prices set by its big brother, Ford's huge-selling F-Series line. While the F-Series trucks start below $30,000, the average price has recently been around $44,000.

That leaves plenty of room for a smaller Ranger that would maybe have a starting price around $24,000 -- but with lots of appealing options that boost the average transaction price to somewhere in the neighborhood of, say, $32,000 or thereabouts. At that price, Ford would almost certainly be making a nice profit on a U.S.-built Ranger.

Reason two: There's a market for the Ranger
The old Ranger was discontinued because of lackluster sales. But while the old Ranger had its fans, it was a fairly basic truck. A plush new Ranger with high-tech features that was positioned as a nice everyday vehicle for people with active lifestyles would be a different kind of thing.

A new Ranger won't come close to the 60,000-units-plus that Ford's F-Series posts nearly every month. But the Ranger still has strong brand recognition, and Ford is very good at coming up with trucks that truck customers love. A strong new Ranger should be able to post monthly sales numbers in the same general league as the midsize entries from Toyota and GM, right off the bat.

Reason three: It's not just the Ranger, it's a Bronco (and maybe an Everest), too
A report from Bloomberg on Wednesday morning added this detail: Ford may also be considering an all-new Bronco -- a rugged mid-size SUV with strong off-road capabilities -- for the same factory. The new Ranger and Bronco would likely share underpinnings, which would keep costs down, and make it easy to build the two on the same assembly line.

That makes all the sense in the world. Here's why, in one chart: 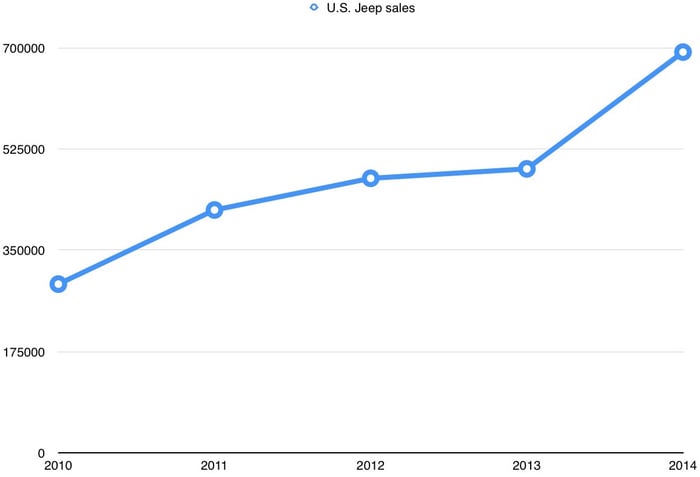 Fiat Chrysler (NYSE:FCAU) has a lot of problems, but Jeep isn't one of them: The rugged SUV brand's sales have absolutely boomed during the last five years. The chart doesn't include 2015, but through July, Jeep sales are up another 21% over last year's stratospheric levels.

If I'm Ford CEO Mark Fields, I want a piece of that high-profit sales boom. Ford hasn't built a Bronco since 1996, but the old Ford Bronco was originally conceived way back in the 1960s as a competitor for the vehicle we now know as the Jeep Wrangler. It's remembered fondly by the off-road crowd, and it's a safe bet that a well-done new Bronco would quickly find an avid following among off-road fans -- and others.

In fact, Ford might even have three vehicles in mind for this factory: A new Ranger, a new Bronco in the mold of Jeep's Wrangler, and a rugged-but-plush off-road-capable SUV in the mold of Jeep's Grand Cherokee. In fact, a plusher version of Ford's Everest -- a truck-based SUV that it sells in some overseas markets -- could be part of the deal here.

That's the niche that was once kinda-sorta occupied by Ford's Explorer. But today's Explorer has evolved -- extremely successfully -- into a car-based crossover SUV.

Michigan Assembly made about 285,000 vehicles last year. Ten thousand Rangers a month wouldn't be enough to keep all of those workers busy after the Focus and C-Max depart. But assuming that gas prices don't get out of hand, Ford could easily come up with a very profitable set of products that could keep the Michigan Assembly Plant -- and its UAW-represented workers -- very busy indeed.