What: Oil and gas drilling and production equipment maker Cameron International Corporation (NYSE:CAM.DL) stock is up a massive 40% today after it was announced that the company would be acquired by oil and gas services giant Schlumberger Limited (NYSE:SLB). If the deal completes as structured, Cameron investors would get $14.44 in cash, and 0.716 Schlumberger shares. At current market prices of around $69 for Schlumberger stock, that makes the deal worth about $64 per share in total for Cameron investors, who will effectively own 10% of Schlumberger once the deal closes.

So what: Schlumberger and Cameron are no strangers, as the two have a major joint venture already in place, OneSubsea, in which Cameron's expertise in subsea drilling, production, and gathering equipment is paired with Schlumberger's extensive reservoir analysis and production maximizing expertise. Frankly, it's not a big surprise to see the much larger Schlumberger make this move, especially considering that it's getting Cameron at a still-discounted price from its all-time highs.

Furthermore, the oil and gas sector is ripe for more consolidation. Oil and gas prices are down globally, and many weaker companies are feeling the pinch of lower costs, which affect equipment and service providers like Cameron when their customers -- oil producers -- cut spending and push to renegotiate contracts at lower rates.

Now what: If you're a relatively recent Cameron investor, congratulations on a big win! If you're a longer-term shareholder, you may still be left with less than you had a year ago. Even after this big deal, Cameron shares are still down nearly 20% from last year's high, almost exactly one year ago: 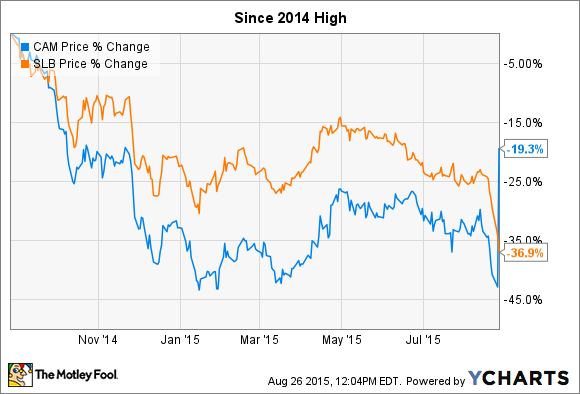 If the answer to the first question is "yes," then it probably makes sense to hold your Cameron shares, and let them convert when the deal closes early next year -- especially if you hold the shares in a taxable account. Accounting rules mean you should owe less taxes, since the deal is partly a stock swap and only partly cash-based. Furthermore, the deal is worth -- at current stock prices -- about $5 per share more than you'd get for the current Cameron stock price.

Which brings us to the second question. If you're not interested in owning Schlumberger, it's worth considering your tax consequences and opportunity cost, too. If you hold shares in a taxable account and have held less than one year, selling today would mean you pay taxes on those gains at your effective income tax rate this year. If you can hold until after you've held the shares for one year, you'll only pay the 15% (in most cases) capital gains tax rate.

There's also the question of collecting the additional premium price by holding shares longer, with the caveat that Cameron shares are now going to move in lockstep with Schlumberger's since they are essentially worth $14.44 in cash, and 0.716 Schlumberger share, each. If Schlumberger's stock price were to fall significantly, then Cameron's would do the same. As to the discount to the deal value that Cameron's stock trades for today, as the deal gets closer to completion, Cameron's stock price will slowly move closer to the total price.

So if Schlumberger's stock price holds up, it could be in your best interest to wait it out a little longer, especially if it also means a big drop in your tax exposure versus selling today.