Please ensure Javascript is enabled for purposes of website accessibility
Log In Help Join The Motley Fool
Free Article Join Over 1 Million Premium Members And Get More In-Depth Stock Guidance and Research
By Tyler Crowe - Jan 30, 2016 at 9:15AM

There aren't a whole lot of things to like about 2016 if you 'e a Schlumberger investor. Beyond that, though...

I'm not really going out on a limb when I say that Schlumberger (SLB 1.86%) had a tough time in 2015. Declining oil and gas activity led to lower revenues, profits, and an 18% stock decline that haven't exactly inspired a lot of good vibes for investors. 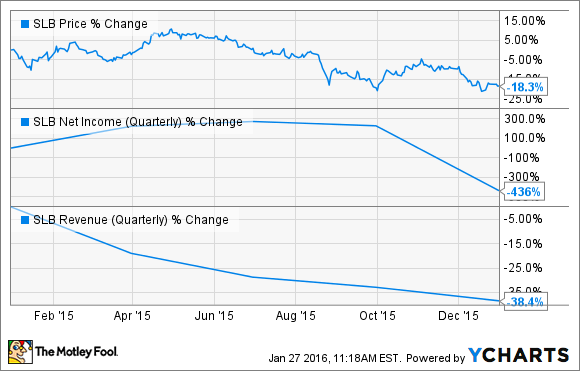 Even though 2015's performance left something to be desired, it's very possible that 2016 could get a lot worse. Let's take a look at what's working against the company, and what investors should do with another possible year of poor results ahead of them.

Belts are getting really tight
As an oil services company, Schlumberger doesn't derive any of its revenue from the direct sale of oil and gas. Unfortunately, though, almost all of its revenue comes from the spending habits of the companies that do, so there's a direct correlation between the price of oil and the amount of drilling activity Schlumberger can service. As oil prices have slipped into the $30 range, oil and gas-drilling activity has gone down hard and fast.

The most recent rig survey from Baker Hughes (BHI) has the number of active rigs in the U.S. approaching the lows we saw back in 1998-1999, the lowest recorded rig activity since Baker Hughest started tracking that data back in the 1960s. 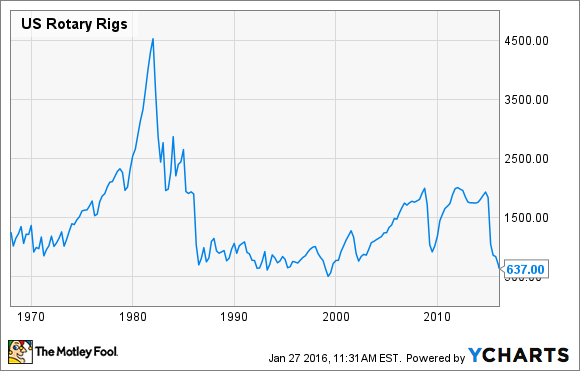 Let's remember, though, that Schlumberger isn't the only company that has seen its sales evaporate in 2015. Almost all of the major oil services companies have reported drops in revenue and profits during this time frame.

As bad as it has been, though, there aren't a whole lot of signs that things are going to get better in 2016. With oil at $30 a barrel, many companies are planning even bigger cuts to their capital spending budgets. At the same time, they're renegotiating service contracts with these companies in order to spread the oil-price pain among the entire sector.

According to ExxonMobil, one of the biggest spenders in the business, it expects it can get savings from drilling services contracts between 15%-25% in the coming quarters thanks to lower drilling activity and the high amount of idle equipment that Schlumberger, Halliburton, and the like have on the books.

As bad as this all sounds, it's not as though Schlumberger has been asleep at the wheel while this has happened. CEO Paal Kibsgaard has gone on record during the company's recent conference calls that he doesn't expect drilling activity to pick back up until the end of 2016 at the earliest, and the company has been cutting costs left and right to maintain operating profit margins during the downturn.

Salvation in the Cameron acquisition?
In the coming months, Schlumberger will complete its acquisition of Cameron International (CAM.DL), a manufacturer of subsea equipment that will help streamline the design and procurement process for Schlumberger's offshore development services. The deal intends to add a nice boost to the company's bottom line, as it will save the company $900 million in costs over the first two years of the deal.

Development of these kinds of projects take much longer than on-land and shale drilling, and its entirely possible that low oil prices will cause deepwater development activity to lag behind development of other oil sources. If that were the case, then the weakness we have seen in 2016 could extend even further into the future for offshore development.

What a Fool believes
I think that it's pretty safe to say that investors in Schlumberger shouldn't expect much from shares in 2016. We're probably in for another big round of spending cuts in the oil patch that will lead to lower revenue and profits throughout the year.

As bad as that may sound, though, investors could use this as a long window of opportunity to accumulate shares. The company has the best margins among the large oil-services companies, it's still churning out plenty of cash to cover its capital spending and its dividend, and its current dividend yield is the highest its been since the mid-'80s. Eventually, reinvestment in the oil patch will have to happen, and when it does, investors who look at Schlumberger now could be handsomely rewarded.