Trucking has been a slow grower for Westport. Image source: Westport Innovations.

Westport Innovations (NASDAQ:WPRT) has had a tough couple of years. With slower-than-expected adoption of its engine technology for heavy-duty trucking, weak economies in Europe and China, and a major drop in oil prices -- making natural gas less attractive as an alternative -- it's been ugly for investors: 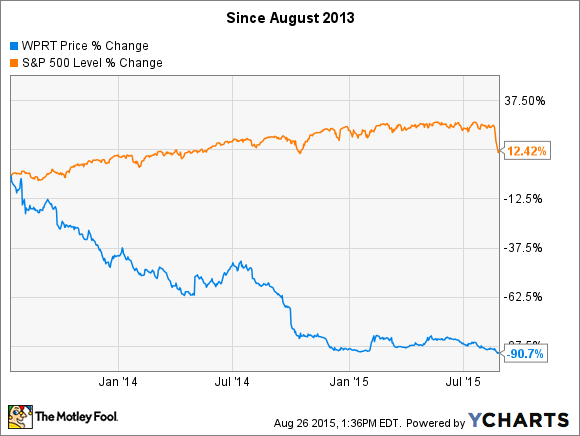 However, natural gas refueling leader Clean Energy Fuels (NASDAQ:CLNE) issued a recent press release, announcing a number of refueling agreements with trucking, waste removal, and public transit companies all over the U.S., even as gas and diesel prices approach their lowest levels since the recession.

Does this announcement -- evidence that many major fleet operators continue to see value in natural gas -- bode well for Westport Innovations? Let's take a closer look.

What Clean Energy announced
On Aug. 25, Clean Energy announced deals with 15 transportation companies, some adding more natural gas vehicles and some just getting started. For Clean Energy, the combined deals are worth over 6 million annual gallon-equivalents of natural gas, or 2% of the company's current sales. That's a pretty impressive amount of new business for a single announcement.

The raw numbers are a drop in the bucket in terms of total vehicles on the road, but these are all large commercial fleets that spend millions on fuel each year. It's unlikely that any of them would make these big commitments unless there was a measurable benefit.

What it means for Westport
Westport's value proposition is based on two key things:

The number of vehicles in the announcement is tiny compared to the addressable market and the levels of sales that Westport needs to see, but it does indicate that both new customers and existing users are still finding value in natural gas, even as gasoline and diesel prices continue to fall. This is critically important for Westport, as demand for its technology is wholly predicated on natural gas remaining a viable option.

Westport's problems
Even when oil was $100 per barrel, adoption of NGVs by fleets was slow. The result? Key Westport initiatives like HPDI technology, which the company has targeted at heavy-duty trucking, and the company's WiNG program with Ford have yet to generate positive returns.

Westport discontinued its in-house 15-liter HPDI engine more than a year ago. This was part of a larger plan to shift away from building engines, and competing with potential customers, instead focusing on developing solutions that OEMs could integrate into their manufacturing. 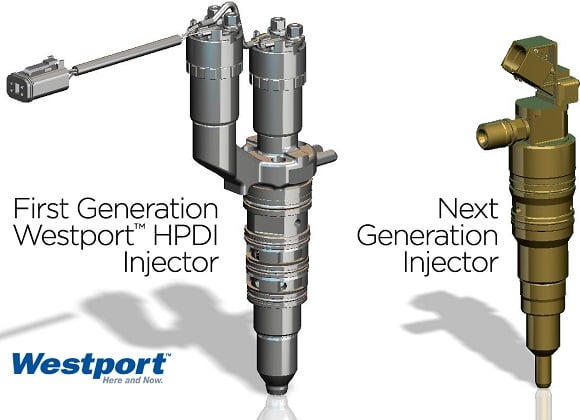 This led to the company partnering with Delphi Automotive, one of the world's largest fuel injector makers, to co-develop and manufacture HPDI 2.0. While this is likely to be a smart move in the long run since it will lower costs and increase access to OEMs, the partnership won't be ready for full-scale manufacturing until 2016. The Ford program has been slow to generate the sales Westport has hoped for, and on a recent earnings call management indicated that the program wasn't yet profitable. In short, nothing has really panned out so far.

The upside
In the midst of all the struggles, management has executed on major cost-cutting and reorganization of the business. As a result, second-quarter operating expenses were down almost $10 million from the fourth quarter of 2014, while gross margins and gross profit dollars were up. Gross profit dollars nearly doubled sequentially, so the steps are beginning to bear fruit.

The company is also actively involved in selling off assets in an effort to raise cash. Management says it should be able to raise an extra $50 million this way, and they would be non-core assets the company isn't counting on for cash flows. The idea here is to make sure the company has enough cash on hand to get into 2016, when HPDI manufacturing capacity should be on line, more of the company's WiNG products will be ready to ship, and other key programs like the Volvo bi-fuel station wagon will be selling.

Looking ahead for Westport
It's hard to look at the stock price and not see a company crumbling at the foundations. It's also foolish not to acknowledge that the company's cash outflows and small reserves create significant risk. Furthermore, HPDI, the WiNG program, and other initiatives aren't brand new, so investors can only take "Wait till next year (and this time we mean it)" so far before wanting to move on.

With that said, the current stock price is market sentiment as much as it is the serious and not-to-be-ignored risks, and there's clearly still a lot of interest in natural gas for transportation, as Clean Energy's announcement attests. When you factor in the risks and the upside, it's not quite a coin toss, but it's close. All considered, I think there are better-than-even odds that the company can turn the corner.